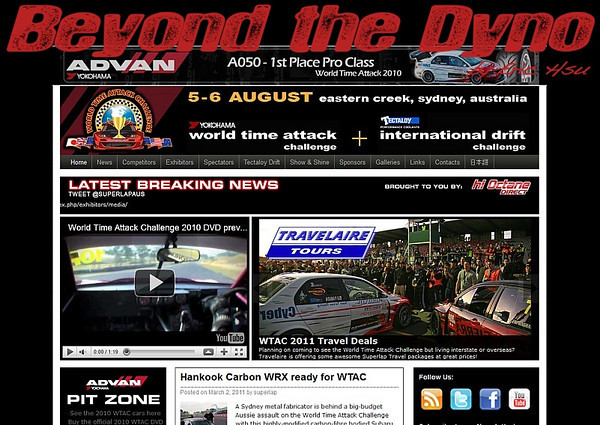 The 2010 WTAC was a really exciting event. It was probably one of the best time attacks I have ever been to. I had the fortune of traveling to Sydney with the Sierra Sierra EVO which finished in 2nd place just behind the CyberEVO. Naturally I am hoping that the SSE EVO will be making it back to the 2011 WTAC for some redemption. Redemption is spelled C-H-R-I-S-T-I-N-E in my dictionary. Anyhow, confirmed so far for 2011 is the CyberEVO CT9A once again, the Scorch Racing S15, the Advan/Hi-Octane BNR34 GT-R, and the Hankook WRX.

I believe the controversial Garage Revolution FD3S RX-7 and the Cosworth powered AVO Turboworld Japan GD Impreza STi will also be making the trip from Japan, but I don't see them as confirmed entries on the WTAC website. I have heard that Mark Berry has a big and bad BorgWarner EFR turbo on order for the Advan/Hi Octane Racing BNR34 GT-R and the car is going to be put on a diet as well. The Hankook Australia WRX is being developed as I write this and promises to be ultralight and is supposed to be making 700whp. I have not heard anything yet about the Tomei/Cusco Impreza.

But what about the USA you ask? I have heard mention of Sierra Sierra possibly bringing Christine (the Cosworth powered EVO) and GST bringing their Impreza L to represent the USA. The previous sentence is just a rumor at this point in time, but it would just add to the ultimate bad assness of the WTAC event.

If you're thinking of  visitng Sydney for a vacation or whatever, plan it around August 5-6 of this year. Eastern Creek Raceway is only 30 minutes from Sydney. Sydney is one of the cities you must visit before your dirt nap. It's fun, the people are nice, it's clean, there's plenty to do and Aussies drink like madmen which will always make for a fun trip. You can easily sneak in at least one day at the WTAC to watch a once in a lifetime combination of crazy fast cars from all over the world without too much slack from the GF or wife.

For up to the minute updates on the 2011 World Time Attack Challenge, be sure to visit www.worldtimeattack.com. Until the next update, enjoy the video below: The Road To Abu Dhabi Part 3: Disappointment in the Desert (cont.)