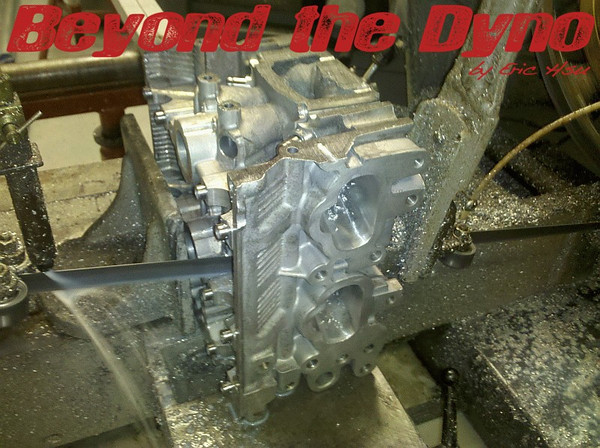 Back in August 2010, I spent some time sectioning a 4G63 cylinder block and cylinder head so that Tyler, Clayton, Lyon, and I could get a detailed look at the structural integrity of the components. We weren't able to get CAD models from Mitsubishi so we had to do it the old fashioned way. This study came about because we had to solve the head to block interface issue for Sierra Sierra. This was not a drag engine that had a total life span of 15 miles at 1/4 mile intervals in 10 second sessions. These 800hp engines have to last for many hundreds of miles in approximately 12 miles intervals in 10 minute sessions. The Sierra Sierra engines had never had a component failure so we knew the Cosworth internals were plenty good. This study was the initial investigation of what was going on inside of the factory castings.

The 4G block was too tall to fit into our band saw so I asked Martin if he could mill away some material. The part of the block below the crank centerline was not the part we were interested in anyhow. Martin chucked the block up in the CNC and wrote a quick program to cut the block down.

Here's what Martin ended up at couple hours later. Now it was short enough to chuck into the band saw. This was just an EVO 8 block from a completely factory engine that we had sitting around with a spun main bearing so it was a perfect candidate for sectioning.

After sectioning the block, I noticed there was some sand in the crevices of the block. I took a flat screwdriver and was able to chip some of the iron/sand mixture away. It's difficult to see in this image, but it is a very hard and crusty matrix of iron and sand that is semi attached to the block. When I say semi, I mean that the factory did not intend for this sand/iron matrix to stay behind after the sand cores from the casting tooling were broken away. It is the result of old school sand casting tooling and methods. Remember that the 4G63 is the younger brother of the G32B that was born in the early 70's.

Underneath the iron/sand matrix is loose sand and plenty of iron particles. This particular cluster here is at the bottom of a water jacket in between cylnders, but some of this was present in oil passages as well. While none of this caused a problem in the engine's approximate 40,000 miles of usage in a completely stock EVO 8, I wonder if some of it could have broken off and caused a problem in the lubrication system of a race engine that is subjected to far more vibration. Every production sand cast cylinder block built by Cosworth spends a considerable amount of time in ultrasonic cleaners so it isn't a concern for Cosworth built engines, but seeing this crap break off with the simple flick of a screwdriver makes me worry about blocks that aren't ultrasonically cleaned.