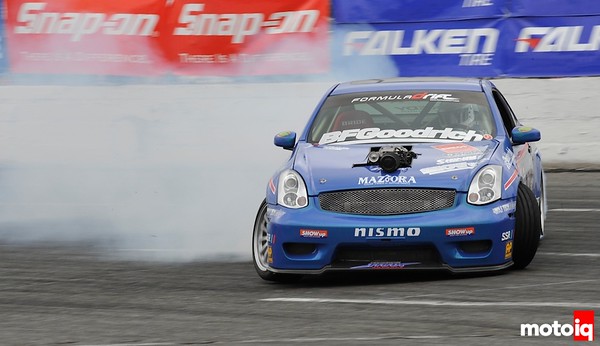 What a day, MotoIQ is involved with the series on several levels, from Jeff wielding cameras to Mike spinning wrenches, we were all pretty busy. Sometimes event coverage is dangerous as well. When Ryuji Miki hit the wall with his FD, Jeff was nearly struck with aluminum wing endplate that came spinning at him like a Boomerang, MotorMavens.com camera ace Antonio Alvendia was fragged with hunks of carbon fiber and lexan and Mike ran.
Despite of it all we managed to capture some nice images from Friday’s qualifying and practice sessions. Hope you enjoy. More to come later (including video of Ryuji's crash)! 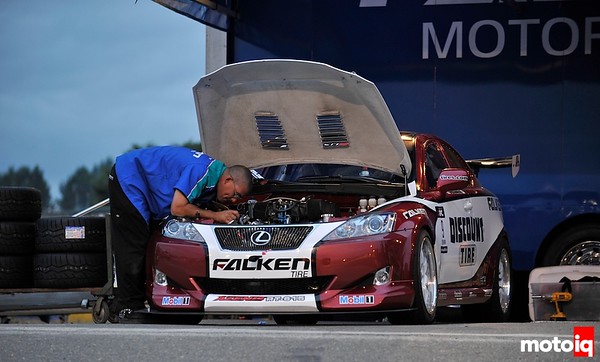 Scott Dodgion performs in between round maintenance on Dai Yoshihara's Discount Tire/Falken/SPD Metalworks Lexus.  Dai went on to qualify 5th 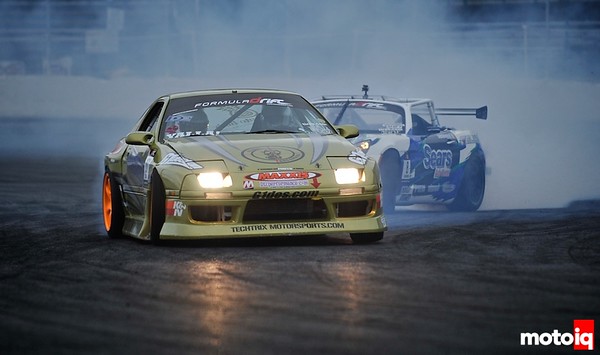 Michael Esa in the Maxxis Tire Mazda FC dukes it out with Darren McNamara in the Sears/Falken/ASD Sky.  Maxxis wowed the crowd on pre-grid with their model that had huge attributes if you know what I mean.  Dmac assured us that they are no such things as Leprechauns although we are sure he's holding out on us.  Dmac prevailed in this battle and advanced to the top 16 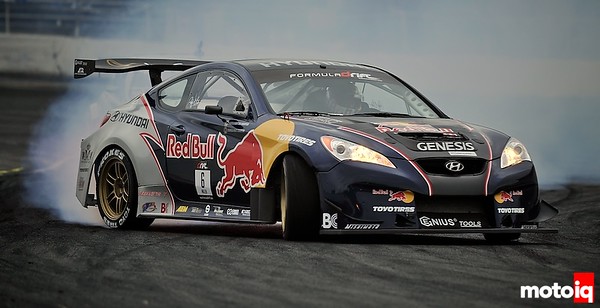 Rhys Millen fresh from Pikes Peak attacks the course in his Hyundai Genesis. 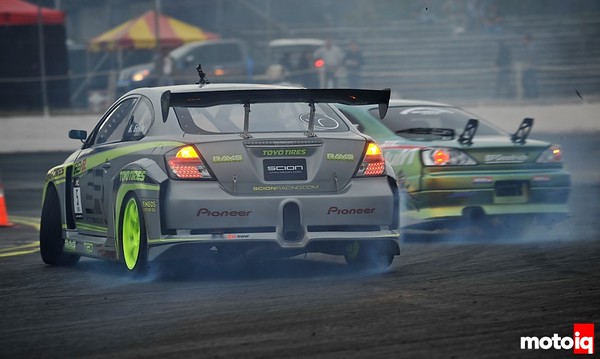 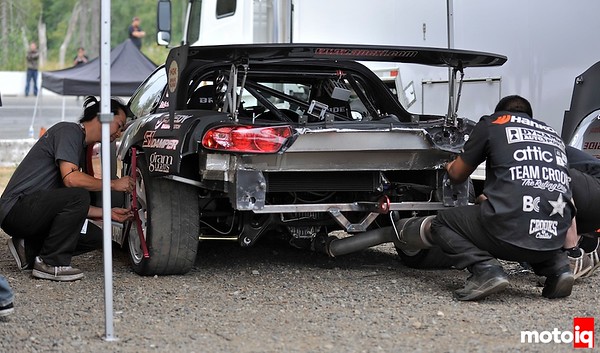 D1 champ Ryuji Miki's Dynamic Autosports/Apexi/Hankook Tires Mazda FD gets repaired after the accident that fragged us with car pieces.  We brought their wing endplate back to there pits for them. 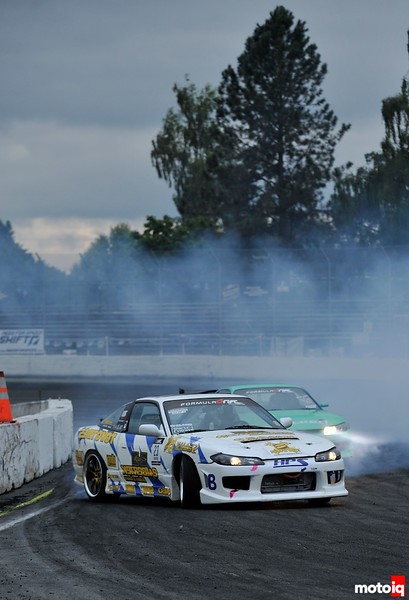 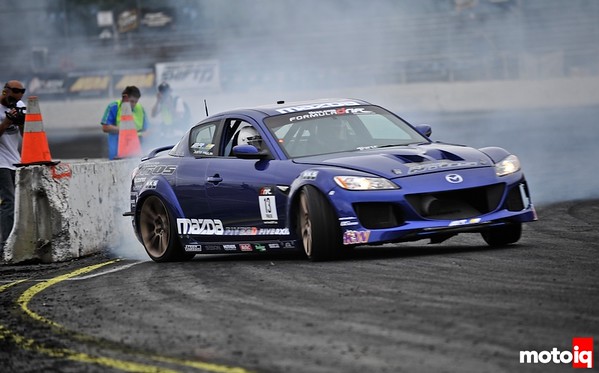 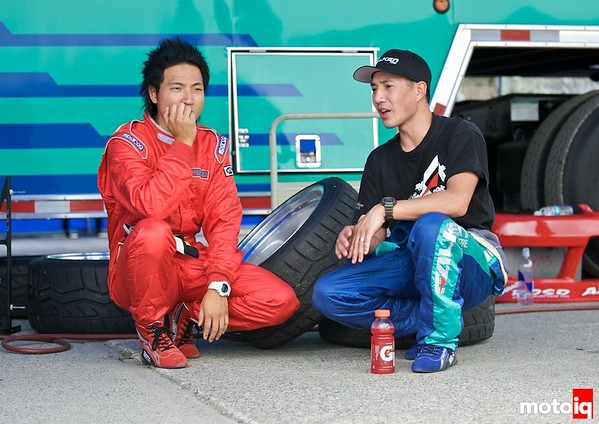 Dai Yoshihara and Calvin Wan discuss the line at the tricky and unforgiving Evergreen Speedway.  The wall on the oval was to later claim the Discount Tire Lexus in a horrific crash.  Fortunately Dai walked away unhurt. 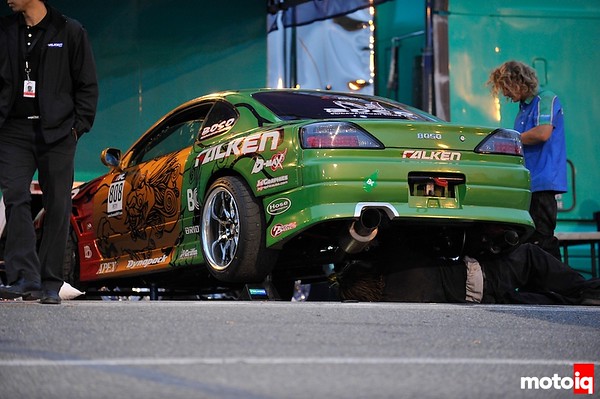 Everyone's Favorite privateer, Falken Support driver Ross Petty had the drive of his life qualifying first.  Shortly after he developed engine problems forcing the Garage Boso team to pull an all nighter replacing the engine to get him in the show. 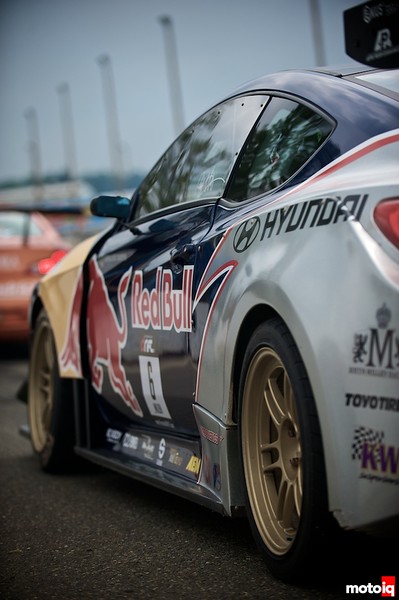 Rhys Millen's Red Bull Hyundai Genesis has proven to be a versatile machine competing in drifting, hill climbs and time attacks with success