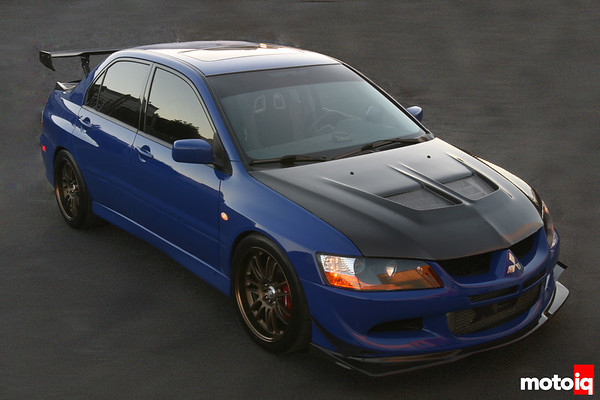 From the second we first drove an EVO VI on loan from Mitsubishi 8 years ago, we have been in love with the EVO series of cars.  The small relatively light 4-Door sedan reminded us of another favorite car.  It was lot like a super tuned Turbo Sentra SE-R but with its 4WD drivetrain, it could actually put the power to the ground at high boost.  Unfortunately the EVO was not available for sale in the USA.  Fast forward a few more years and Mitsubishi remarkably decides to import the EVO VIII to our shores.  We got to drive an EVO VIII on the track for a press event and this time we really fell in love with the EVO family.  The EVO's handling is amazingly good with really fast steering with great feedback, the brakes are amazing for a factory car and the power of its turbo 2 liter motor is surprising.  We have never driven any car for any price that is this easy to drive fast.  We had to have one as a project car!

We managed to get a really good deal on a nearly new EVO that had been sitting in storage at XS Engineering for a few years.  It was a show EVO built by Pepsi as a marketing tool which went on the Hot Import Nights Tour back in 2003-2004.  The car had been sitting in storage since it had returned from the tour and XS needed the space.  XS makes arrangements for us to purchase the car.  The trouble is, now what do we do with a show car? We are really not into show cars one bit, our thing is primarily GO cars.  The EVO is decked out with a crazy sound system with neon lights and a lame non functioning Nitrous Oxide system that fills the trunk adding hundreds of acceleration, braking and cornering hampering pounds of mass.  Big heavy 19 inch chrome wheels fill the wheelwells.  We don't particularly like the aero kit, even though it's expensive and JDM, we prefer a kit with more function and racing inspired styling.  The car is covered with graphics and we don't want to look like a rolling Pepsi billboard.

There are a few good bits we like.  The car has JIC FLT2 suspension.  The engine is tuned by Eric Hsu of XS Engineering and it has a big XS front mount IC, an XS Engineering ignition system, a Apexi Power FC stand alone engine management system, a custom large plenum intake manifold and an Apexi AVC-R boost controller.  Other decent bits are an RSR stainless exhaust and an experimental AVO turbo kit with a Garret GT3037 turbo.  The set up puts out 380 whp on pump gas but is a little laggy.  The interior of the car has cool Sparco Torinio seats upholstered in grey and black Amara with the door panels and rear seat done to match.  The rest of the car is stock.  It's not quite perfect but it's clean and it's a great place to start.