Modernizing the 300ZX and the VG30DETT, Fixing Spark Scatter with EPR Engineered Performance

One of the VG30DE and DETT’s weak points is the belt drive of its valvetrain.  Belts were the main way to drive camshafts in the 80’s when the engine was developed but have since been eliminated from current engine design in an effort to improve reliability and reduce maintenance costs.  For the most part, timing belts are quiet, can cushion the valvetrain from crankshaft harmonics, and are reliable if the scheduled maintenance intervals are strictly maintained.  One of the issues with the VG30 belt drive is that if performance camshafts are used with stiffer valve springs and the rev limit of the engine is raised, the timing belt starts to flap and whip around, especially at certain harmonics induced at specific rpm ranges. This whip manifests itself as timing inaccuracy as the crank angle sensor is driven by one of the camshafts. Nissan uses an optical sensor with a wheel with 360 windows chopping the infrared signal from an LED to create the crank angle reference for the ECU. The sensor is known to be problematic, especially when aftermarket cams are used.  Triggering errors and timing fluctuations occur, enough to cause poor running and even engine damage.  Many people blame the senor but the main cause of these issues is poor control of the timing belt.  A flapping belt causes the sensor to read incorrectly.  Most of the belt flapping is caused because the OEM hydraulic belt tensioner is inadequate for handling the vibrational impulses generated by stiffer valve springs, more radical cam profiles, and higher rpm.  To solve this, Nissan Specialists Engineered Performance has come up with a solidly adjustable timing belt tensioner. 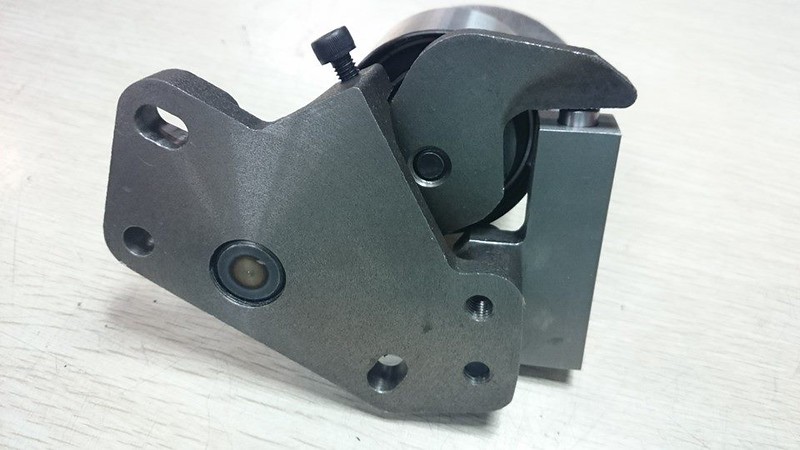 The Engineered Performance tensioner replaces the OEM Hydraulic Tensioner.  It eliminates the hydraulic element of the OEM tensioner and replaces it with a solid mechanical adjuster that pushes on a pully that takes the slack out of the timing belt.  The stock hydraulic tensioner unit is an oil and gas-filled cylinder that provides the belt tension, it is not pressurized by the engine’s oil system.  It provides both tension and a small measure of damping to the timing belt.  This system is adequate for a stock engine but if the timing belt has more resistance via still valve springs and bumpier cam lobes, the hydraulic element is not strong enough to maintain belt tension.  Also, the tensioners pressure will decline with age and mileage allowing the belt to flap and the cam and ignition timing to fluctuate.  With a long belt and 4 cams, this fluctuation can be quite a bit, many degrees, enough to cause a power loss and even damage the engine.

The cam belt is manually adjusted so the belt has the same about of slack specified in the service manual.  Unlike the stock tensioner where you pull a pin and let the tensioner do its thing, the EPR tensioner has to be set by the user. The cam belt tension should be periodically checked and readjusted as well.