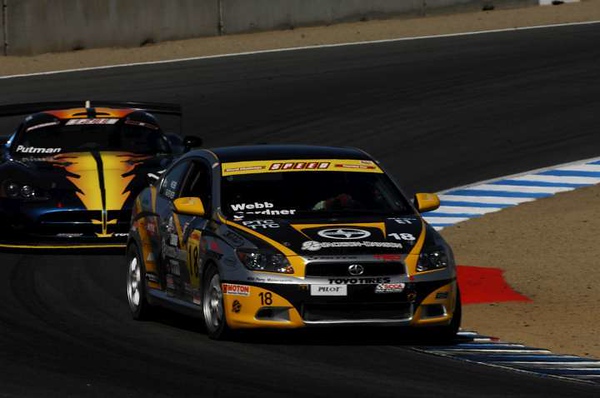 Veteran racer Scott Webb, took the win during the 50-minute Touring Car race.  The TRD supercharged and intercooled Scion tC put on a great show for tens of thousands of fans, as he not only won the class, but actually mixed it up with the faster class TC cars. For Laguna Seca, team manager and two-time NASA national champion driver, Dan Gardner, had decided that Webb’s experience at the track made him the best fit to pedal the car.

On Thursday, during testing, Webb got settled in, coming into the pits several times, as the team made setup changes to try to get the car to work even better.  Webb radioed in after each change was made, giving feedback.  By the end of the day he was getting more and more comfortable, but the team still was trying to get some push out of the car. Gardner and crewmen Sean Morris and Jeff Lew made even more drastic changes that evening, based on driver feedback throughout the day.  The team was determined to figure out a way to get the car to rotate in the slower sections without making the car undrivable in the fast bits. Friday’s morning practice would prove that the team’s changes had helped make the car turn in better.  In Turn 6 Webb was caught a bit off guard, as the car dove quickly down to the apex.  As it did he managed to drop the inside wheel, hooking it on a deep sharp curb.  The tire instantly flattened, and Webb went into the team’s pit to see if there was time to fix the car and get him back out again. The crew got to work quickly.  In addition to the tire being flat, the left front wheel was mangled beyond repair.  The car was put up in the air, and the wheel was removed.  The team checked for anything else bent and couldn’t find anything.  There was, however, a bit of fluid on the front control arm.  It didn’t appear to be anything severe, but extra time was taken to make sure.

After the crew was satisfied that the car was safe to drive, another wheel was put on the car, and there still was a decent amount of time left in the session to send Webb back out.  Once back on track, Webb reported that the car felt better than it did the previous day.  Because of the incident the team had grabbed a different type of wheel, but apparently the hubcentric ring was not a perfect fit.  After the first practice session the wheel was slightly loose.  The crew tracked the issue down, and elected to go back to their Enkei RPF1 wheel. As the car was being looked over, the team noticed even more fluid on the left front control arm.  Based on the location, they began to believe that it was coming from the shock.  Luckily Lex Carson and Kent McCray from sponsor Moton were on site to lend a hand.

Moton did a quick check of the reservoir before the team took the suspension apart.  Indeed they found that the canister was completely empty.  The crew then hustled to remove the shock, and Carson and McCray got to work refilling the reservoir.  They then pressurized the shock to see if they could locate the leak. A small leak was seen on the bottom of the shock by one of the welds.  It perhaps had been broken by the curb contact earlier, or was potentially a combination of that and a hit Gardner had taken just weeks ago at NASA’s Nationals.  Again the team was fortunate, as the Bimmerworld guys were ready and able to get a small tack weld in place.  Bimmerworld also was gracious enough to let the Scion team pit in one of their four bays, making everything easier for the JD team during the entire time at Laguna.

With everything now reinstalled, the team thought they had their troubles licked for the afternoon practice session.  And things started off great, with Webb saying that the car felt good.  His 1:41.8 lap time showed improvement as well.  About two-thirds of the way into the session, Webb came on the radio to say that something in the front end of the car had let go.  He wasn’t sure what it was, but he wasn’t confident that he should try to limp the car back into the pits.  Webb found a safe spot and parked it until a wrecker could pull him off. Upon arriving back in the team’s pit, the crew saw that all but one of the front left studs had completely sheared off.  Fortunately one lug nut remained, holding the wheel in place…barely.

There was significant damage to the corner, and the team didn’t want to take any chances.  The started the hustle to replace the wheel and tire, knuckle, hub, bearing, studs, brake caliper, and front rotor and hat.  It was a grind, but once done the team did a full brake bleed, front-end alignment, and then headed back to the hotel to get a few hours of sleep.

On Saturday, the team had only one task, get through a 20-minute qualifying session.  Webb took to the track and reported that everything felt great.  The team knew that if he didn’t get his fast lap early in the session, it probably wasn’t going to happen later, as the tires had a tendency to go away. Indeed, in his second lap, Webb posted a 1:41.3, a nice half second faster than the day before.  Gardner got on the radio to advise him that if the tires went away it might be better to come in early and save the car for the race.  Webb agreed and came off just a few laps in. The time was enough to secure Scion their first-ever professional pole position.  The car seemed rock-solid again, and the team now had plenty of time to look everything over before leaving the track.  The goal was to give Webb a flawless car for the big race.

On Sunday’s race day, the morning would prove to be quite chilly, perhaps not optimal for track grip, but perfect for the TRD supercharged and intercooled Scion tC to make good power.  For the first time this season, the team would be performing a standing start, a longtime tradition in World Challenge.  Webb had done a couple practice starts during the days prior, so he had an idea about the launch.  Still, the team is used to flying starts, so the standing start would be yet another x-factor.  As the lights on the light boxes went out, Webb and the Scion propelled forward, but cars were everywhere going into Turn 1, and Webb didn’t want to get in the middle of a battle for the season championship between the faster TC class cars.  In backing off a bit he let a couple of cars by.

A few laps in, he would take positions back, and gain another due to a mistake made by one of the Acuras.  He was running his qualifying pace and was keeping it consistent, turning times only three seconds off the TC cars.  The second place TC2 car was quite a ways back by now, and Webb was starting to mix it up with the TC class cars.  On lap 8, a car went off-track and got stuck deep in a gravel trap.  The full course yellow came out, and the pace car picked up the leader.  The restart would be a flying, single-file type, something the team was well acquainted with. Gardner went over to the starter’s stand, and got ready to call out the green to Webb.  It would be four laps before the pace car’s lights would go out and racing would resume, but the team was ready.  Webb said the car felt good, and he was getting into a rhythm.  As the green came out Gardner shouted over the radio, and Webb rocketed the Scion forward, getting very aggressive in Turn 1 as he took two more positions, getting further into the back of the Touring Car field. On lap 15, Webb was trying to give Touring Car driver Eric Curran some room and so he moved over to the right in Turn 10.  As Curran went by, the number 23 Ford Focus didn’t give the Scion any room.  He slid into Webb and the Scion, forcing him off-track.  The Scion spun to the inside, came across the track, and settled in the dirt.

Webb quickly got back on track, but not before losing two positions.  Karma came back to bite the Focus though, as he was forced to pit shortly thereafter due to axle troubles.  The Scion kept going, and appeared to be only a bit banged up, with the door and fender pushed in and the driver’s side mirror broken.  Webb kept banging off consistent laps after getting back on track.  No one else would catch him, including the TC2 RX-8.  On lap 26 the white flag came out, as Webb concentrated on turning one last clean lap.  He crossed the checker at the 50-minute mark, bringing Scion home their first professional road race victory.

The Mazda Raceway Laguna Seca race is set to be nationally broadcast on SPEED on Tuesday, November 3 at 2 p.m. EST.  The team now readies for the next round of the WERC endurance series, as Webb and Gardner take on Infineon Racway in Sonoma, Calif. on October 25, for a three-hour enduro.  The talented group at Toyota’s Motorsports Technical Center, headed by Chuck Wade, will again be an invaluable technical asset as they help the team prepare the car for the next battle. 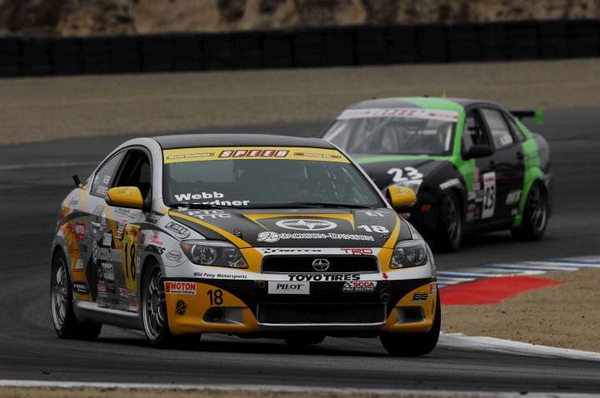