The MotoIQ shop trailer has an electric jack and winch that are powered by its own battery, and like any trailer it sits around for long periods of time.  Not the most ideal of situations for most batteries, but perfect for an OPTIMA deep cycle AGM sealed battery. Our old battery didn’t have the juice to operate the winch or jack anymore and could not take a charge.  When plugged into the truck with the engine running the jack could barely operate, but there still was not enough juice to operate the winch.  We were also concerned that the battery-powered breakaway brakes would not function anymore in an emergency. Also, having the dead battery sucking up power was also a drain on the truck’s electrical system.  Having the trailer brakes powered solely by the truck probably was not the best situation either.  To take care of our battery issues for a long time to come we replaced our dead 10-year-old battery with an OPTIMA blue top D34M.

We chose the Optima D34M to power our trailer, because it is a true deep cycle battery capable of supplying plenty of power to the trailer’s electrical systems when the truck’s alternator was not enough and even when the trailer is unplugged from the truck.  Unlike other deep cycle batteries, the D34M is also capable of starting an engine making it a true dual-use deep cycle.  Although we don’t plan on putting an engine in our trailer, it is nice to know that we could jump-start our truck or other vehicles, like cranky racecars, at the track using the trailer’s battery. The deep cycle capability is also useful when the trailer has been sitting.  We use our trailer 5-10 times a year so sometimes it sits for a few months, particularly in the off-season. If the deep cycle battery gets partially discharged like this it won’t be harmed.

The Blue Top battery, like all OPTIMA batteries, is an AGM type. AGM means absorbent glass mat.  Instead of having a hollow case full of acid with lead plates hung in the acid bath like a traditional battery, the AGM battery has bats of fluffy glass fiber separating the plates. The glass mats keep the plates separated with a physical barrier that prevents them from touching.  The mats also keep the electrolyte from sloshing around. To make things even stronger, OPTIMA rolls the cells into a coil like a jelly roll and puts them in a case of six rolls. This makes an OPTIMA battery almost impervious to vibrations and shock that can cause other batteries to fail internally from the plates getting fatigued, bent, and touching each other. With the electrolyte being contained in the absorbent mat, the battery is spill-proof and can be mounted in any position. Unlike conventional batteries which will drip corrosive acid unless kept upright.  Everyone knows and has experienced conventional batteries spewing acid that bubbles out of the vents and makes a mess, even damaging the engine compartment. An Optima will never do this. 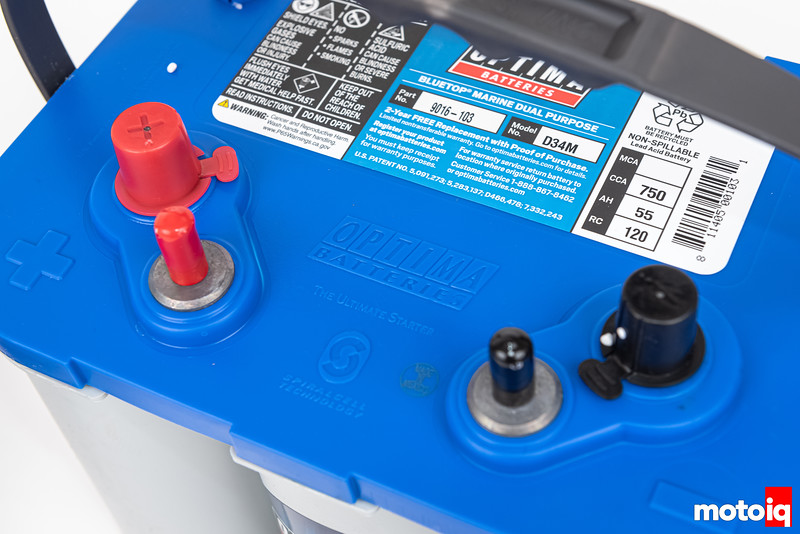 Our Optima Blue Top D34M battery is capable of supplying 750 cold-cranking amps and can power a 25 amp drain for 120 minutes.  It is capable of many charge-discharge cycles which is perfect for our trailer and its electrical accessories.  Like many dual-use batteries it has vehicle terminals and auxiliary terminals for accessories which worked great in our trailer.

Since many of the cars at our shop use OPTIMA batteries, especially our personal daily drivers, we thought that having a charger that can both charge them quickly and safely plus keep them in good shape during storage was a good idea. Fortunately, OPTIMA has a charger that can do just that, the Digital 400. The Digital 400 is designed specifically to charge OPTIMA AGM batteries, but it does have settings for other conventional batteries.