The Vishnu exhaust was nicely crafted from polished 3″ tig welded 304 stainless tubing and came with everything we needed for a clean install, including spacers to lower the chassis cross brace to make room for the fat exhaust pipes. Nothing “standard” about this standard exhaust! The exhaust features a free flowing perforated core main and sub muffler A high flow cat with provisions for a rear mounted OBDII O2 sensor for no MIL light operation is also part of the exhaust package. Another reason why we chose the standard grade exhaust is its modular construction allows us to delete the cat for race gas and track usage, which we will test at a later date. The exhaust fit perfectly which made for a smooth and easy bolt on installation. The exhaust gave a smooth deep throaty sound, perfect, not too loud and not tinny. Back at XS, we were once again frustrated by the ECU’s reaction to our fuel. The exhaust’s reduced backpressure and the added power it allowed seemingly gave the ECU fits, greatly increasing the power variation. We’ll be very conservative and say that we had a gain over 8-peak hp to 240.6 hp but experienced maximum gains of 12-15 hp in most other places in the powerband. On some runs if we wanted to cherrypick, the car belted out 30 more peak hp than stock! Damn gas. Despite this, the exhaust wins our bang for the buck award. 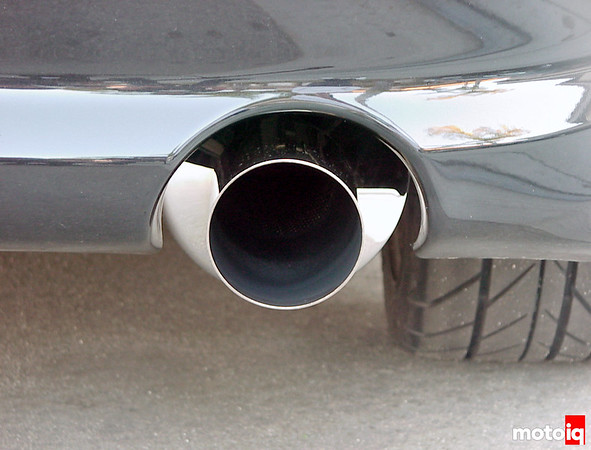 Next up was AEM’s cold air intake. Usually a proven power adder, we were once again thwarted by our pee like gas to get consistent readings. The AEM intake is a lightweight aluminum short ram design with an open element cone type filter that uses an aluminum shield to block hot air wash from entering the engine compartment. It’s hard to beat the stock EVO system because it has a large filter element, big airbox and a cold air ram stock. AEM dyno tunes the length and diameter of each application for best power. We registered a 4 hp gain up to 244.5 hp with general gains of up to 7 hp over a wide part of the power band from 3300 rpm on up. The AEM intake also produced even more dyno variation. Our theory is that these mods were improving cylinder filling and thus tickling the knock sensor more. Due to run to run power variation, it was difficult to confirm this gain as a solid one but this was a conservative non cherry picked run. The AEM intake made a throaty roar when the throttle was applied and you could really hear the compressor bypass valve at work popping and hissing like an open blow off valve. We like this mechanical cacophony although some might find it offensive. If you fall into the latter category, keep your car stock and don’t whine.

Our next mod was Unorthodox racing’s Ultra S underdrive pulley set. This was a 3 piece set consisting of crank, alternator and water pump pulleys. The Unorthdox pulleys gain power two ways, one they underdrive the crank driven accessories with a lower drive ratio cutting parasitic losses, and two they are much lighter than stock, reducing the amount of power needed to spin them up to speed. The Unorthodox pullies cut nearly 5 lbs or rotating weight off of the car’s reciprocating mass. Other tuners have confirmed that these pulleys are usually a 6 whp gain but we could not honestly pick out a gain in the mass of variability in our dyno runs. The car did rev faster seat of the pants and felt faster and we have always experienced good gains with Unorthodox’s pullies before so we’ll have to ignore our data and take other tuner’s word for it. We blame it all on the gas and the hyperactive knock sensor. For a 4G63 builder, removing the front damper and replacing it with an underdrive pulley is controversial. Many respected 4G63 builders do not recommend this. Since the 4G63 is an internally balanced engine and we have never had a problem with any Unorthodox pulley on any engine we have built, including very high horsepower and racing engines, we feel that we don’t need to worry.