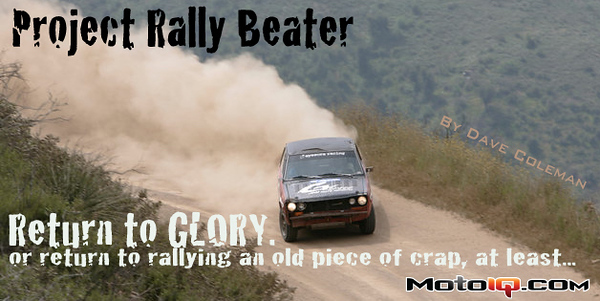 Return to Glroy…
or to rallying an old piece of crap, at least.

It only took one turn for all my doubts to disappear. It had been four and a half years since the Rally beater last turned a wheel in anger and I was, only moments earlier, quite skeptical that it could still do it. After a few rough, but glory-filled years of dirt and hammers, the 510 had been sitting idle in my various driveways as my attention was distracted by a newer rally car and the unimportant details of life (everything that isn't rally).

When I finally dropped the hammer at the start of stage 1, I still had no idea if the car would handle right. A week of commuting in a rally car will tell you if your radiator leaks, but nothing you can do on the pavement tells you if your old box still handles well in the dirt or if you still remember how to drive it. As the SR20 wailed and the gravel flew, the beater's normally rough, clattery ride smoothed out into a gloriously fluid set of arcs, slides, and various maneuvers named after old Scandinavians. I had almost enough time to start giggling with boyish glee before the engine turned off.

There was no sputtering, no abnormally bad noise, just the unmuffled wail of Japanese junkyard technology one second and utter silence the next. I frantically started flipping switches and pushing buttons in the vain hope that somehow the position of my high-beam switch might be connected to the sudden cessation of internal combustion. As the clock ticked and the inevitable high-speed arrival of a functional rally car became imminent, Amar leapt from the co-driver's seat so he could flail his arms and wave little plastic triangles in an effort to prevent our untimely demise.

Still confused, and quickly becoming angry, I headed for the engine bay, stopping only momentarily to clothesline myself with the intercom cord I'd failed to remove. A minty-fresh tidal wave of calm washed over me as I lifted the hood and simultaneously realized not only why my car wasn't running, but why I had spent a nearly consecutive 54 hours rewiring the entire car from scratch a few weeks earlier. When I undertook this daunting task, I mistakenly thought I was doing so to prevent my car from dying on the side of a stage road. In reality, I had done it to simplify my diagnostic procedure when it died anyway. Instead of spending countless hours hunting lost electrons, I simply opened the hood and looked down at the mass airflow meter that had fallen off the intake pipe and come to rest uselessly in the bottom of the engine bay. Somebody give me a screwdriver!