For my low-speed/max-response turbo S2000 project, I decided to go with an air-to-water setup. Auto-x is the environment I’m designing for where you’re sitting idling for long periods of time and the Vmax is low. For a road course track car, an air-to-air intercooler setup is a no-brainer. It would be cheaper and lighter and effective. However, the operating conditions and requirements for an auto-x car are different. Lots of idling creating heat soak, relatively low on-course speed, and the desire for maximum throttle response make an air-to-water configuration preferable. Many of the OEMs have trended this way for street cars which have similar operating conditions.

This is the sketch for my initial system layout. Of course, nothing is finalized, but it’s the basic idea. The main thing still up in the air is the placement of the air-to-water intercooler core. It’s one of those, have to try it in the car for real and see how much space is available. The major components are the air-to-water intercooler, the heat exchanger for the coolant, and the coolant pump. I may or may not need a SPAL slim fan on the radiator to free up space. I haven’t figured out the coolant reservoir solution yet as it will depend on how I end up mounting the intercooler. I’m jumping a little bit ahead, but I took some measurements and a 2010-2012 Ford Shelby GT500 heat exchanger should just fit in my front bumper area. I’m targeting 500hp crank and the 2012 GT500 is rated for 550hp, so it should do the job. It’s important to note the 2010-2012 model year GT500 heat exchanger is an improvement over the 2007-2009 model years which was rated at 500hp.

For the air-to-water intercooler, I wanted something custom to best meet my needs. As the Garrett G25-660 compressor outlet is 2” diameter, I wanted a 2” inlet to the intercooler. As the throttle body is about 2.5” diameter, I wanted a 2.5” diameter outlet. The GT500 heat exchanger has ¾” hose barbs for the coolant hoses, so I wanted ¾” hose barbs on the intercooler. I have no fab capability, so I needed someone else to fabricate the intercooler for me. Enter Bell Intercoolers. Not only do they have a bunch of different core shapes and sizes which is critical for my application and making it fit in the S2000, but they can do custom projects too. I originally envisioned a dual pass coolant loop, but it turned out the added complexity was beyond my cost:benefit ratio, so we ended up with just a single pass design. 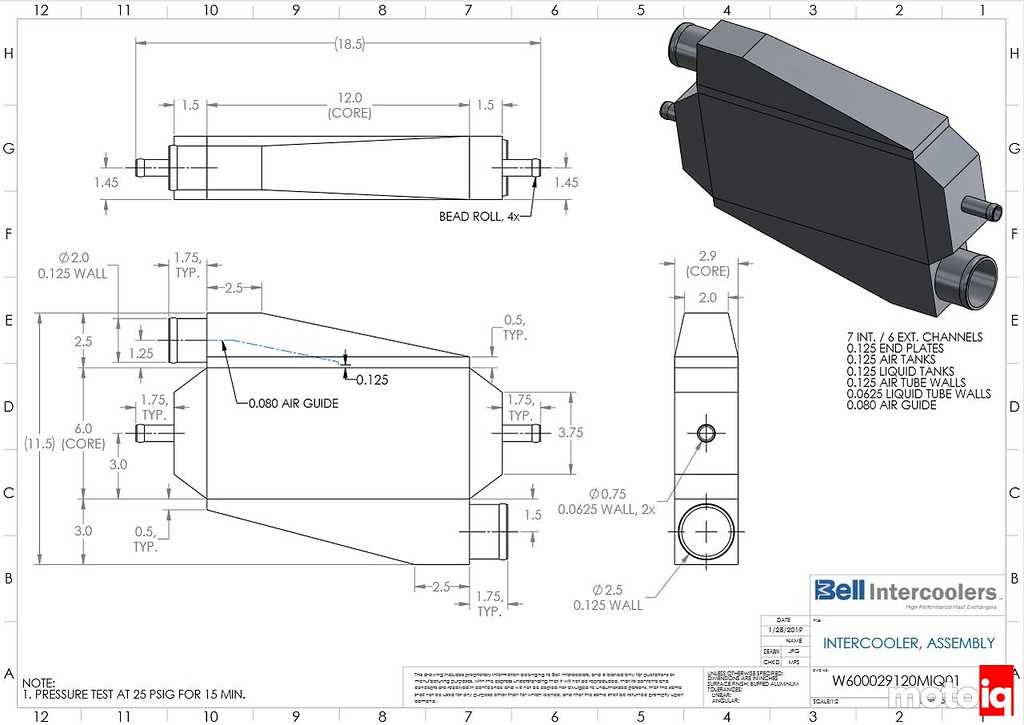 I sent my sketch to Bell Intercoolers and they had me this drawing two days later. In my sketch, I envisioned a shaped end-tank to promote more equal flow distribution. After a quick discussion, it was decided to go with an air guide in the end-tank to achieve the same result with easier fabrication. The core size I decided on was 12” wide, 2.9” tall, and 6” in depth. That’s a core volume of 208.8 cubic inches. Garrett rates their air-to-water core that’s 141.5 cubic inches (9.8” x 3.8” x 3.8”) at 500hp and their 169 cubic inch core (11.7” x 3.8” x 3.8”) at 750hp, so I have just a wee bit of headroom. Bell does have a core that’s 8.5” wide instead of 12” wide and that would have been 147.9 cubic inches, but I just wanted to be extra conservative on sizing and the 12” wide should fit fine. The airflow path through the Bell core is only 6” in length and I have 12” of width, so the pressure drop should be extremely low. I’m thinking in the ballpark of 0.5psi at 50lbs/min airflow. Maybe less. With the core being 2.9” thick and the inlet and outlets being 2” and 2.5” diameters, there should be little pressure drop due to minimal cross section change going from the piping to the end tanks. If the core had been wider at 4”, there would have been some more flow losses going from the 2” inlet expanding to the 4” core and then 4” core compressing to the 2.5” outlet.

I made a cardboard mock-up of my original concept. The original core I picked was 10” in length, so it’s 2” shorter than my final selection. You can visualize how short the intercooler piping will be which will help to maximize throttle response. The core height of 2.9” is critical for one possible mounting configuration; I measured approximately 4” between the front of the engine and the cross member going across the engine bay which the stock airbox sits on top of. If all goes well, I can fit the intercooler between the engine and the cross member making for a very tidy package. It’s going to be tight and I won’t know for sure until I do a test fit. If it does not, I can mount the intercooler like how I have the cardboard mock-up. There’s no way the Garrett core at 3.8” wide would fit between the engine and cross member.