We had noticed that the coolant temperature of Project STI was pretty hot considering that the car had a big CSF radiator and a Greddy oil cooler, in fact, the temperature was the highest of all of our project cars with modified cooling systems.  In bumper-to-bumper traffic, our coolant temps were going up to 209 degrees.  As soon as the vehicle started moving this would drop to around 190 degrees and dither from 185-195 degrees.  Although this was not bad, it was higher than our other project cars. Doing some research we found that the factory thermostat starts opening at around 195 degrees and is fully open at 203 degrees.  We decided to try a Rodger Clark Motorsports low-temperature thermostat from Flatirons Tuning to see what would happen.

The RCM thermostat is supposedly of higher quality than OEM and more reliable, but not being thermostat construction experts, we don’t have any way of proving this but this is what RCM claims.  The RCM thermostat starts opening at 158 degrees and is fully open at 194 degrees. 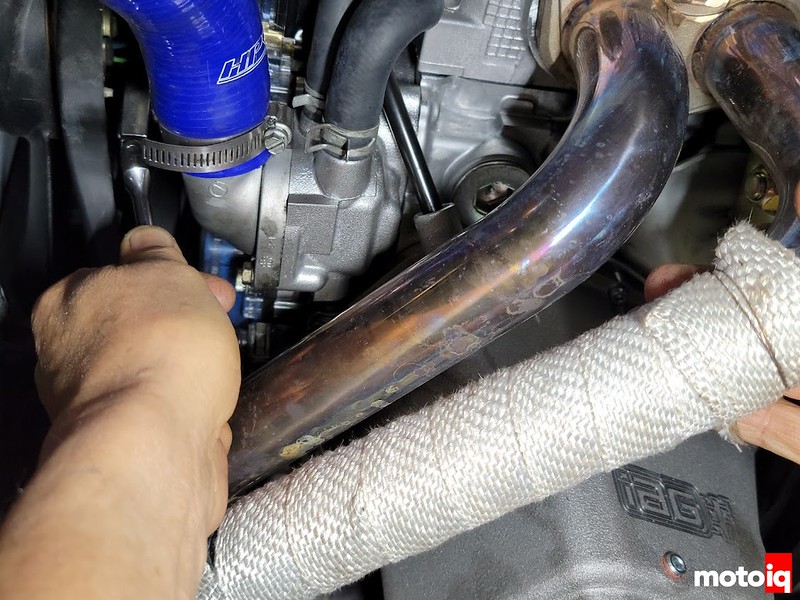 Changing the thermostat is easy enough, first, obviously you drain your coolant. Then remove the upper 10mm bolt holding the thermostat housing on.  This is located on the front lower driver’s side of the engine, not the top like an inline motor so it’s accessed at the bottom of the car.

Boom, remove the stock thermostat and replace it with the new low-temperature one. WATCH: How Turbocharger Wastegates Work – Internal vs External PLUS New Wastegates from Garrett!