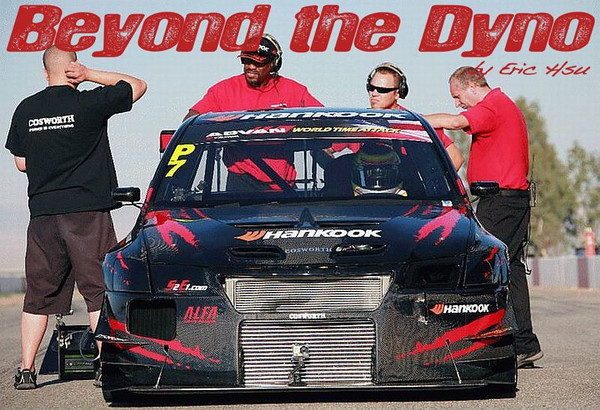 Sierra Sierra's marketing/hype man, John Naderi, posted these pictures from a Buttonwillow test day on Sierra Sierra's Facebook page last month. BTW John took all the pictures below and I simply stole them. You gotta love the digital age. Anyhow, below is my far more detailed version of the Buttonwillow test day and the events that led up to the T04 turbo failure. The BorgWarner news is toward the bottom, but in summary, BW's going to save the day (hopefully) with their new line of EFR turbochargers.

For past posts on the Sierra Sierra EVO 8, CLICK HERE!

The last time I went to a test at Buttonwillow with the Sierra Sierra boys was about a month ago (September). We had one of our typical problem laden tests. No matter how much preparation is put into the EVO, almost always something goes wrong. There are so many systems and sub-systems being pushed to the aboslute edge that can have issues in time attack. This is the part that sucks about competing with production based cars. If it were a factory developed race car (e.g. 997 GT3 Cup), then the builder or manufacturer will have already addressed every potential issue and a team only needs to buy replacment parts in case of failure. In a situation like the Sierra Sierra EVO, the team not only has to setup the car, but they need to engineer and validate solutions themselves. What a pain in the ass. Anyhow, I can count on one hand the number of times the EVO has come off the trailer and it ran one full day with little to no issues. Actually make that 3 fingers.

There were multiple WTF?s throughout the day, but the first and second “WTF?s” were the exhaust manifold bolts holding the turbo to the exhaust manifold. While we've never had that kind of problem in the past, the hardware was changed for ease of turbo removal and installation. The original hardware was race car style hardware: Unbrako socket cap screws (allen bolts), drilled and safety wired so there was no chance in hell they could back out. Since the screws were a bitch to use with the Garrett T04 and Full-Race exhaust manifold combination, some Fastenal brand grade 8 cap screws (hex head bolts) were used. They failed in about 1.5 laps when Emp called in on the radio complaining of a loss of power. In the hot pits, we saw the turbo was hanging off of the exhaust manifold. This was strange because Mike drilled and safety wired the bolt heads.

The cause?  ALL 4 bolt heads separated from the rest of the bolts at the same time. All four breaking at the same time is pretty ridiculous so it was determined to be a faulty batch of grade 8 screws. I don't exactly remember what happened next, but if I remember correctly, a different brand of grade 8 bolts were used and we had a similar failure in another 1.5 laps. That was WTF? #2. Sure the Unbrakos are a little more expensive, but they are worth the extra cost. Most of the socket head cap screws used on Cosworth race engines are Unbrako brand as well. We were reminded of the Christine Constant: if you've never experienced something before, you will for damn sure with this car. Here was the solution:

There weren't anymore of the right size Unbrako screws on the truck so the solution was to use some high grade studs from a drawer in the truck, crank on some nuts, and tack the fuckers in place. Problem solved as long as we didn't have to remove the turbo again.