To be completely honest, it's my turn to write something on MotoIQ and I am neither prepared since I'm in a hotel room without my external hard drive nor have anything to write about. My half written stories aren't finished because more pics need to be taken and more facts need to be collected. So I started cruising You Tube and ran into my old video of Tarzan kicking ass in the XS Engineering BNR32 GT-R. I still get excited when I watch it. I figured 5 years is about time to share it again with a younger generation of newbies or older school generation alike. If you don't know much about Skyline GT-Rs, check out the Wikipedia page here.

There's something truly visceral about the sound and feel of a properly built RB26DETT engine in a BNR32 or BNR34 at 9,000rpm that no other engine and car combination can match (I'm not a BCNR33 fan). Even in the video above at a meager 1.3bar of boost, the RB26 still sounds like it is pretty damn pissed off. Sure, F1 engines rev to 18,500rpm. F1 engines are cool as hell and sound super awesome in their own right, but it still isn't an RB26. There's a reason why there are so many BNR32/33/34 junkies all over the world (myself included): Australia, Japan, UK, North America, Eastern Europe all have decent populations of RB junkies. When you drive a 500+whp Skyline GT-R, you'll discover what you were missing this whole time. Drive a properly built 800+whp Skyline GT-R with an ultra wide power band (4500-9,500rpm) and I'll put money on it that you will never enjoy another street car more. The only reason you don't know this now is because you've never driven one. And if you have driven one and don't agree with me then you drove a shitty one.

I stress the RB and BNR car combination because I feel that the RB engine is dumb in anything but a Skyline. Why would you want to swap in a stupid, big ass, super long, ultra high center of gravity, cast iron, straight 6 is beyond me unless the car already came with one (e.g. S30 240Z). All you would do is ruin the car you swapped it into by totally destroying the car's balance.

Here's Tarzan in the XS Engineering BNR32 GT-R applying full throttle out of the last turn on the infield circuit at Fontana. The car squated so hard the front left wheel was almost in the air. The Fontana infield was the perfect track for this car becaue there are basically four drag strips and some low speed turns. We beat the closest car by 3 seconds.

We (the XS team) won the first time attack overall we ever competed at. It was a Redline Time Attack on the infield at Fontana. Back in 2006, the XS Engineering GT-R was still new and the Superlap event at Buttonwillow was its second event ever. We took 2nd overall because of the World Challenge GMG Porsche Cup car took 1st. Guess why there are no active race cars allowed at Superlap these days. It's because of me and my bitching about active, professionally campaigned race cars running in lowly time attack. I still agree to this day. Anyhow, Mike Kojima helped us to set up the suspension at both Fontana and Buttonwillow. As you loyal MotoIQ readers know, Mike is one of the true suspension masters on this planet and he helped us and Tarzan go quicker with every outing. Koji and I built a pretty amazing RB26 with HKS internals and Peter at XS ported the head. Cosworth did all of the block and head machining (this was before I worked there). On the dyno, this engine made 850whp on the DTS AWD dyno and 900whp on the 2WD Dynojet, but this engine would never see over 1.3 bar on the track which was 630whp. This engine's life was cut short due to spun rod bearings. That was my first lesson in the necessity of dry sump oiling for no bullshit track cars. The reason we never turned the boost? As you can see in the video above, the car was already a handful. The front bump steer and camber curves weren't exactly ideal. It is an inherent limitation in the BNR32's stock suspension design that was improved in the BCNR33 and further improved in the BNR34. Anyhow, Koji, Peter, Greg, and myself built the car. It was supposed to be turned back into Troy's street car after a year or so of time attack. That never happened. 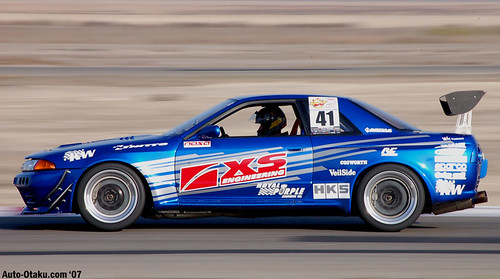 The car is stored in a climate controlled warehouse underneath a car cover. Its engine is turned 60 degrees weekly. It's too bad Mike and I never got to finish the front suspension mods we planned. While it wouldn't be competitive in today's unlimited class time attack, I bet it would do pretty damn good in modified class. Maybe I'll see you guys at Cars n' Coffee soon. It's about time to let it stretch.