So I’m not an experienced snowboarder or anything nor do I claim to be. In fact my trip to Niseko (where I am at the moment) is only my 6th or 7th trip to a mountain for snowboarding. I am not hardcore into boarding, I do not give a shit about jumping or doing tricks, and I don’t really care to look all stylish while doing it. I just enjoy kicking ass gliding over snow and slicing and dicing through turns. I own a pair of snowboard pants, some water resistant socks, some low buck Thinsulate gloves, some early 90’s SCOTT Turbo goggles, and some thermal underwear. The gloves I use are not name brand and cost me $9. The SCOTT goggles were pretty much new, but I bought them in high school and never used them. On top I wear a Sparco vest and an Ezekiel jacket – all stuff they sponsored me. Everythings works great and this is the extent of the equipment I own for boarding. I still rent a board wherever I go. My cousin Laura did hook me up with some boots but I didn’t want to lug them with me to Japan. I think after this trip I’ll invest in some proper boarding gear.

Yesterday I hop on to the board and I was doing ok. I was thinking to myself though, “Damn, I can’t seem to turn very well compared to last time.” The last time I was at Mammoth going down black diamonds if that’s any indication of how well I was controlling the board. I’ve never taken lessons or anything so I’m more or less self taught with tips from friends and cousins. Many of these friends and cousins were patient during my first 4 trips so I owe them some thanks.

Anyhow so I was thinking that if you align a race car to handle properly on a race track then it’s gotta be the same shit for snowboards. Today I went for the first run with my muscles and body sore as shit from the day before. I ate shit like a motherfucker and started to get frustrated. When I rent a board in Mammoth I never had any problems. Since some JDM dude set up my board I had to second guess it (yes, just like JDM tuning). So I adjusted the rear binding clockwise from zero to 10 degrees. My front binding was already at counterclockwise (CCW) 15 degrees and I left this alone. So my feet were pointing away from each other. I headed down the mountain and stopped in 50 feet and thought it felt really odd. I adjusted the rear binding to 10 degrees CCW (so both feet were pointing forward a bit) and went down the mountain. Oh shit what a difference. I could turn much easier, but it still wasn’t like my previous experience snowboarding. So I went down the mountain eating shit here and there. On my way up the mountain in the gondola, I cranked the rear binding to CCW 15 degrees and the front binding to CCW 20 degrees total. Once I started going down the mountain I was turning like the XS GT-R on Hoosiers. I was tearing the mountain up except once when I ate shit super hard and it knocked the wind out of me. These bullshit JDM bindings had come loose once so I had them replaced at the rental shop.

The moral of the story is that if you’re a beginning snowboarder you need to adjust the bindings to find out what you’re most comfortable with. Don’t just trust the guy at the board shop (especially if you’re in Japan) because he’s just guessing what a person of your weight, size, and experience generally likes. Since Japanese people are built differently, I think the JDM snowboard rental shop staff only knows what the Japanese people generally like. So armed with this knowledge, you can make your snowboarding trip a whole lot funner. Of course if you’re a baller, you probably had lessons and somebody to help you setup the board. This tip is for those of us that just try to figure shit out on our own. I know that tomorrow I’m going down the mountain much faster and having way more fun than I would have if I didn’t adjust my bindings. Good stuff… 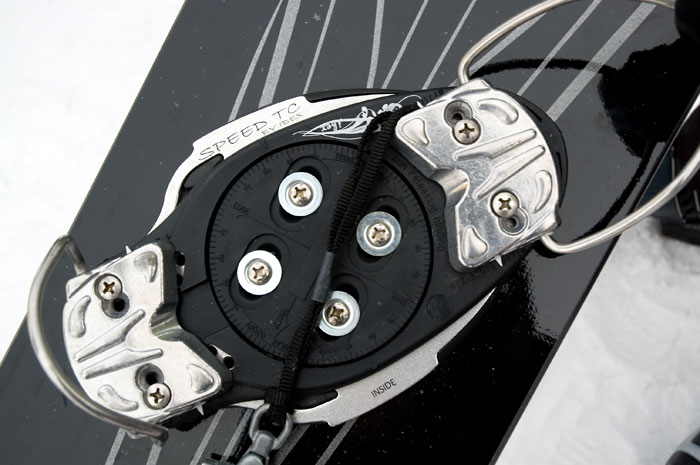 Here’s a peak at a binding so you know what I”m talking about. You can adjust the angle of the binding various ways depending on the design.