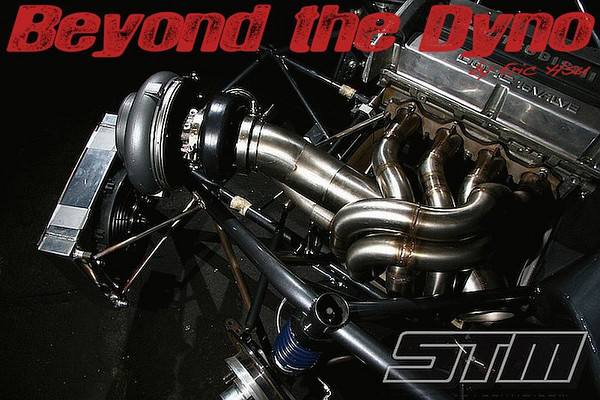 With all the hype about Time Attack, Drift, and Gymkhana/Rally Cross in the US, whatever happened to drag cars with Japanese engines? In the US we don't get too many 4 and 6 cylinder drag cars. I miss import drag racing personally and I think it might be time for a renaissance of sorts soon. But down in New Zealand and Australia, drag racing never faded and is still going very strong. I keep in touch with Andre Simon occasionally, owner of Speedtech Motorsport (STM) in Lower Hutt, New Zealand which is just across the bay from Wellington on the northern island of New Zealand. He sent me to a couple of links about the build of the new HD2 drag EVO that STM built recently.

This is the first full pass Mike Bradley, driver and car owner, completed. The guys at STM are still dialing in the car of course and this first pass was done with a conservative tune at low boost. Despite bogging off the line and an ultra slow 1-2 shift, this still yeilded a 1.28 second 60' time which says a lot of the car's potential when everything is dialed in and Mike is used to the car. For a brand new car built from the ground up, I think an 8.41 is pretty impressive. Watch the video and then tell me if you don't like the sound of a 4G63 blasting through the gears. There's still a small electrical gremlin that STM is sorting out keeping the car from revving out all the way too. More videos on page 6.

Mike originally started drag racing his Mitsu Lancer EVO 2, but soon realized that an AWD drag car's drivetrain was expensive and difficult to keep in once piece. For the 1/4 mile times and the reliability he wanted, he realized that he would have to do it in a proper purpose built rear wheel drive drag car. Sure, Mike could have continued developing the EVO 2 into an 8 second car after spending tons of money, but he decided to cut the bullshit and get straight to the point. Enter the HD2 Drag EVO.

The rolling chrome moly chassis was built by Kerry at Auckland's Top Gear Autotech underneath a factory EVO 8 shell. The chassis is built similar to a US Pro Stock chassis. For better weight distribution, it was built as a left hand drive car (keep in mind Kiwis drive on the right).

Instead of trying to transmit 1400-1500rwhp through a fragile AWD drivetrain, the engine was turned longitudinal and the engine is connected to a Liberty air shifted gear box. At the moment, a triple plate quarter master clutch is used to keep things simple for suspension and chassis tuning. In the very near future a slipper clutch will go in to allow fine tuning of clutch slip to further aid launch and traction. A Mark Williams carbon one piece driveshaft transmits the power to the rear end which is hand fabricated by Jerry Bickel Racecars using an alloy Strange center. Inside of the rear end are Mark Williams 40 spline gun drilled axles, a spool, and 5.14 ring and pinion. All of this connects to the ground via 32×14.5×15″ Goodyear Drag slicks.

From Andre himself about the Liberty transmission, “Liberty transmissions are clutchless which means they don't require the clutch to be used for a shift. They also dont require a gear change ignition cut or the throttle to be lifted. They use dog engagement, but unlike regular dog box the selectors have a ramp on the backside of the dog instead of an undercut. The selector is two piece which means that you actually select two gears at once. When 1st gear is engaged and you select 2nd, the 1st gear selector remains engaged. When the dogs engage on 2nd gear the output shaft speeds up and the 1st gear selector is kicked out by the ramp on the back side of the dog. The advantage is that there is a completely seamless transmission of power which is great for keeping a large turbo on boost the whole way down the track. The downside though is that if you back off the throttle or have to 'pedal' the car on a slippery track, the gearbox will kick out of gear and leave you in neutral. You also can't downshift these boxes but that isn't a big concern for drag racing.”

The car was delivered to STM as a rolling chassis.

The complete rolling chassis had a turbo, exhaust manifold, intercooler, dummy engine, water and oil tanks, but STM decided that there needed to be some revisions to hit their goals. STM was originally supposed to install and build the engine, dry sump, and electronics, but now their list also included re-fabricating the turbo system, intercooler, and water tanks. STM did retain the Hypertune intake manifold and throttle body.