A few months ago, Kojima told you what it's like to do the Nurburgring like a rock star. Now I'm gonna tell you what it's like without the helicopters, the luxury suites, and the long nights of trackside debauchery. This is how you pay your own way.

I recently had a business trip to Germany and had my girlfriend, Sarah, fly out so we could stick a vacation on the end of it. The way things were scheduled, I had two weekends within comfortable driving distance of the Nurburgring with nothing else I had to do. My knowledge of the 'ring is far from comprehensive, (If you want the complete history, use the Google), but this is what I could figure out in the short time I was there:

The track is open to the public most of the time, but not all of the time. The track is closed periodically for private track days, development testing, maintenance and weather. To check the schedule on everything but the weather, go here: http://www.nuerburgring.de/en/nuerburgring-race-track.html (note the unusual spelling) and follow the link to “hours of operation Nordschleife”. After making your plans, re-check the schedule before you drive there, as last-minute changes are standard operating procedure. In fact, don't be surprised if the schedule changes between buying your tickets and pulling up to the track entrance. It really is that unpredictable. While we were there, the track was shut down for 2 hours so a motorcycle tour could ride around the track at painfully low speeds. This was on none of the schedules.

Type “Nurburgring” into you nav system and do what it says. Shit, do I have to tell you everything? 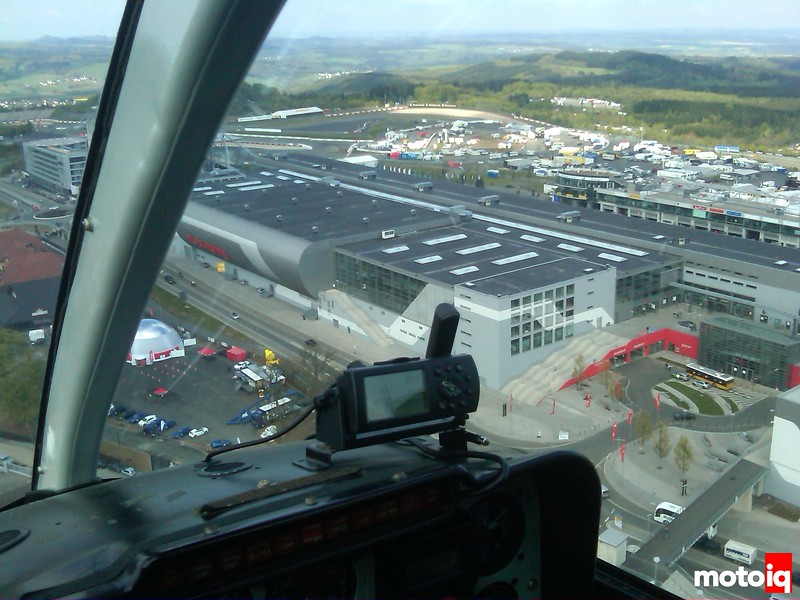 This is actually not trivial. The massive main hall, shown here from the helicopter Jeff and Mike took, is where you buy the tickets and the souvenirs. To get to the track entrance, you drive out of the circle where the orange bus is parked, turn left onto the main road and drive away. It will seem like you're leaving, but really you're just driving parallel with the main straight. You'll drive past all the fancy manufacturer R&D buildings on the right (Mazda doesn't have one, sadly) and feel like you're going entirely too far from the track. Finally, you'll see a small sign for Nurburg on right. Even though the track is on the left, turn right. That road will loop around, drop under the main road, under the track, and pop up in the infield. Before you know it, you'll be stuck in a traffic jam of GT3s, Skylines and BMWs.

There is a small traffic circle right in front of the track entrance, with two small paved parking lots right next to the track, and two bigger dirt ones on the other side for overflow. Park and explore the scene on foot before driving in.

The Nurburgring is technically a toll road, so any car legal to drive in Germany is legal to drive there. Sort of… It seems most rental car companies got tired of replacing brakes and tires after 'ring toursits thrashed the living hell out of them, so they've written Nurburgring exclusion clauses into their contracts. As a result, several companies have sprung up around the track specifically to rent cars for use on the Nurburgring.

For my first weekend at the track, I borrowed a Mazda3 with a 2.0-liter engine and an automatic transmission from Mazda's R&D center in Germany. It worked better than you might expect. Using that first weekend as a scouting trip, I spotted these three rental companies.

RSR had a shop very close to the track entrance and an intriguing back lot full of old Alfa Milanos that looked affordable. I stopped in and chatted with the owner for a bit, only to learn he was sold out on the weekend I wanted to rent. Then I asked him about the smashed Milano I saw them dismantling in the shop.

Turns out the car had been crashed on its first lap while the track was still damp and the driver still cold. The driver misjudged the karoussel, looped it, and destroyed both ends of the car on the guardrail. RSR could salvage the engine and suspension, but the rest was toast.

This is where I learned the most important detail about these 'ring rentals. Most of them don't have insurance, and work on a simple you-break-it-you-buy-it system. The driver bought the Milano when he hit the guardrail and effectively sold the engine and suspension back to RSR for spares. The rest of the Nurburgring (and, it seems, the rest of Germany) works on a similar system, which means that if you bend the guardrail, they'll charge you to fix it. Typical cost is about $6,000. In all, this poor sap's overzealous first lap cost him over $14,000.

RSR has a tempting fleet of cars, including the aforementioned Alfas, Renaultsport Clio Cups and R26.Rs (widely regarded as the hottest factory front-driver of all time), Lotus Exiges, E92 M3s, GT3 Cups, GT3 RSes and even a Lamborghini Gallardo. If it costs $14,000 to make a mistake in a shitty used Alfa, imagine what it costs in the Lamborghini.

The R26.R is as hot shit as front-drivers come. That carbon hood is factory. So is the roll cage. I couldn't even afford to ask the price.

Finally, I spotted some rentals that were more my speed. Rent-4-Ring rents nothing but Suzuki Swifts. They cost a few Euros more than the Swifts from Rent-Racecar, but Rent-4-Ring's cars come on R-compound rubber (Toyo R888s), with track pads and, most importantly, they come with insurance that covers both the car and damage to the guardrails. It seems that renting only low-power cars with super-grippy tires gives you a commendable track record that insurance companies really like.

Rent-4-Ring actually has 3 grades of Swifts to choose from, with the more expensive ones carrying cages, race seats, and unspecified modifications to bump the power up from 130 to 150. We took the cheapest one and had a blast.

Rent-4-Ring's owner is pretty young and actually went to college in Santa Barbara, so his English is flawless. They've got a really friendly staff and can even help you find accomodations in town. They found us a room to rent in a local's house one night, and got us a crazy discount in one of the deluxe new hotels at the recently completed Disneylike rack compound on the second night.

What they lacked, though, was a big enough selection of helmets to borrow. They had a few, but by the time we picked up our car, none were in our sizes. Obviously, if you have room in your luggage, bringing your own helmet would be more pleasant anyway. We were about to drive to Italy in a tiny Fiat Panda, so we had packed light. Like many people, we just drove without helmets.