If you want some pretty pictures go to one of the other photographer run sites and read no further. Those sites are cool and have nice pics, but sometimes you want a little more than that. If you’re interested in the nitty gritty details of the Superlap Australia Pro Class (unlimited or super modified to us Americans) entries then read on.

A lot has happened in the past several days at the track. Some cars have run well, some have broke, and some are being worked on as I write this. Sierra Sierra has had some minor drama as well. It seems like shit will always happen when running cars at this level of performance.

Tomei/Cusco STi
On Tuesday night Ian from Superlap, myself, Daniel from GCG Turbos, Allen from Tomei, Tarzan and some of Ian’s mates went out to dinner. Before dinner we went to a bar in Darling Harbour where we drank Australian draft beer with a beautiful view of the harbour at night. As usual with the Aussies one beer turned into somewhere around 6. Then another 3 beers at dinner. Then more beers (I lost count) and Jack and Cokes at a pub. The only catch was that Tarzan had to wake up at 4AM to go into the city for an Advan Superlap promotional deal and Aussie TV interview. This resulted in Tarzan getting about 40 minutes of sleep. I’m guessing normally Tarzan wouldn’t do this, but he didn’t really have a choice because only the Aussies knew where we were. After getting back to the track and taking a nap, he took the STi out for a shake down and to familiarize himself with Eastern Creek. I saw Tarzan go in and out three times, but the car never seemed to go full blast. The engine had a bad misfire. The Tomei engine guy worked on the engine late into the night and solved the problem. Then earlier today the transmission (6 speed case with a PPG dog gear set) wouldn’t shift. Subaru has a technical training center at Eastern Creek and they lent the Cusco guys a lift so they could figure out what the problem was. When I left the track at 7:30pm tonight, they were putting the transmission back together. It turned out to be a bad selector fork. Hopefully they get the car back together tonight for battle tomorrow.

Sun Auto CyberEVO
The guys from Unlimited Works Ltd. (isn’t that an oxymoron?) and Voltex showed up on Tuesday to prep the car, but Mr. Takisawa “the dentist” and owner, engineer, tuner of the CyberEVO did not arrive until today. Normally the CyberEVO runs on HKS’ Drag Gas which is probably an HKS witch’s brew version of C16. However in Australia, CAMS (the Australian version of FIA) does not allow the use of leaded racing fuels so Mr. Takisawa had to make some adjustments to the mapping with an Elf unleaded racing fuel while Tarzan drove some laps. Unfortunately this mapping adjustment may have resulted in a hurt head gasket. When I left the track at 7:30PM the guys were still working on the fix.

Panspeed FD3S RX-7
The Panspeed team spent Tuesday prepping the car and most of Wednesday tuning the car over at Haltech. The car uses a Motec ECU, but the Haltech dudes are way cool. On the Dyno Dynamics the FD started to spin the rear tires above 400whp so there are no hp numbers unfortunately. The Panspeed guys pretty much had their shit together with a nicely prepped car and it seemed to have been thoroughly tested because by the end of today the car ran a 1:34.xx (there was no official timing today) with some setup tweaks. Daniel from GCG Turbos (a kiwi that lives in Japan and speaks fluent Japanese) translated for me and the head mechanic said that the car weighs in just under 1100kg (2425lbs.). The driver (I cannot remember his name) and team are very confident that the car will go faster.

R-Magic FD3S& RX-7
The guys at Hypertune fabricated a cover for the FD’s passenger seat located crazy ass 2500hp fuel system and added a bar to a section of the cage that was cut out (we are not sure why) so that the 5 point safety harness could be anchored at less than a 42 degree angle to make it CAMS legal. The car was running on track today at almost every session so it was running reliably. I did not see or hear of any major drama with the car. The driver is so short, he looks like a kid from behind. Seriously I think he is under 5′ tall which explains the pedal extensions.

Sierra Sierra Enterprises EVO 8
The EVO is acting like her usually moody self. As with all high maintenance women, Christine the EVO, is no different. On Wednesday we had a serpentine belt self destruct and it took out the dry sump pump’s drive belt. This resulted in zero oil pressure for a couple seconds of full boost 8400rpm+ on on the front straight. Luckily the Cosworth rod bearings, Royal Purple oil, and Emp’s quick shut down skills were good enough to keep the engine alive. Today another serpentine belt came apart so we changed all of the pulleys and bearings. This appears to have fixed the problem. A small oil leak on the turbo oil drain saturated the turbine housing’s heat blanket and the red hot glowing turbo started a fire today. That was a bit scary in the hot pits, but the fire was put out, oil cleaned up, leak fixed, and we were able to set today’s unofficial fastest lap of 1:32.5 at “low” boost. As Emp gets used to the track, we tweak the car’s setup, and we go to high boost, Christine will certainly go quicker. 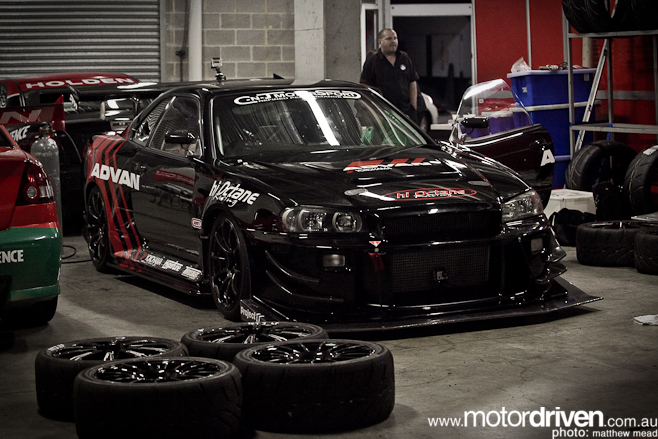 Hi Octane/ADVAN BNR34 Skyline GT-R
Mark Berry and his crew showed up yesterday and unloaded the car and their gear in the garage next to us. Being a Skyline GT-R nut (notice the word Skyline before the GT-R) myself, I walked over to check out the car. What I saw was quite possibly one of the cleanest BNR34s in the world. Whether or not you like the body and wheel combo is subjective, but nevertheless the car is built super freaking clean. To see the curves of this car in person is important. Since it is black you just cannot see how perfect the rear fenders are in pictures. Not only is the car clean as hell, it has a lot of good stuff: Hi Octane RB drysump, Hi Octane RB30 kit with RB26 head, double A-arm front suspension, low mounted fuel cell, a proper roll cage, carbon widebody, air jacks, side exit exhaust, and the list goes on and on. The car was on track today for testing for the entire day, but I heard from Nathan at Superlap that the head gasket may have been hurt. It was great to hear the roar of an RB engine although it wasn’t quite the same roar of an RB26. The RB30 certainly sounds different. No, it doesn’t have the dull, monotonous boring ass growl of a 2JZ, but it isn’t the glorious screaming roar of a short deck RB26/28 either. When I left the track they were in the process of fixing the car.

BSM BNR32 Skyline GT-R
This BNR32 makes 670whp at four wheels on a Dynapack using a Motec M800 ECU and has a bunch of nice parts. They use the M800 to control the ATTESSA as well with a PWM output. While this car is promising, it was suffering from a misfire both yesterday and today. They tried almost everything, but no no avail. They even asked me to check out the car. With a misfire at moderate boost (1.5 bar only) the car ran a 1:36.xx. Both driver and team believe the car will go significantly faster if they can fix the misfire. When I left the track they were still trying to diagnose the issue.

Donut King Holden Commodore
This car is an ex-Australian Supercar with an unrestricted 6.0L V8. This car showed up today in the garage. When the guy tried to start the car, it took about a minute of cranking before the engine even sounded like it fired. I was thinking to myself why doesn’t the engine builder/tuner add some cranking fuel? He kept cranking the engine to try and start it, but it just kept taking forever. Once the engine started, it sounded pretty mean like your typical built V8. I’m not quite sure where the car went, but it took off never to come back. The owner did not have a tire sponsor or any tires so he asked Emp (the SSE EVO 8 driver) for used tires in exchange for some track tips. I don’t think he knew how fast the EVO was going already. There was a slight tone of condescension, but whatever. I’m told that Australian Supercar V8 racers and enthusiast pretty much all clown “Jap” cars. It makes me want to see the SSE EVO smoke the Eastern Creek Aussie Supercar record of 1:30.71 on full racing slicks even more.

There are other cars in the Pro Class, but I probably didn’t get a chance to meet the people or hear any information about them. There’s also a $600k factory built widebody Lotus Exige ex-FIA GT3 race car modified with a 500hp Toyota 2ZZ engine that is running 1:35s (owner driven and not a pro driver). I am told this is 1 of 10 factory built GT3 cars in the world, but I was told this in a pub so who knows if its true. Another ex-Australian Supercar with a 4.0L straight 6 turbo is also coming tomorrow. I also hope everybody on this list gets everything up and running. It won’t be any fun otherwise.

The weather report sounds like it is getting better and the chances of rain seem to be reducing. I hope that at least one out of the two days is dry.

And that’s it for now. Check the Superlap site and/or the Superlap twitter feed for updates. I might get to it also, but chances are I’ll be pretty busy.