Building the Bulletproof Transmission, Secrets of the Pros 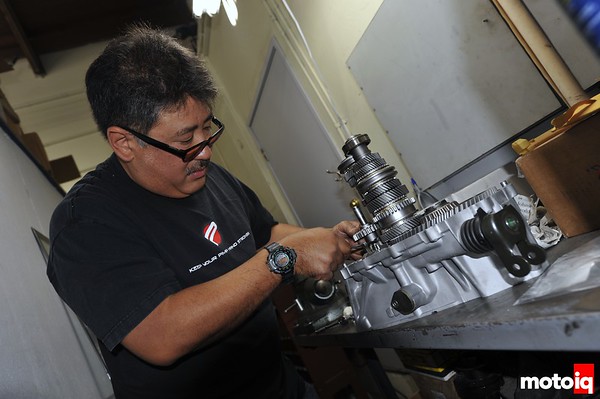 Although the 1991-1999 Nissan Sentra equipped with the venerable SR20DE engine was a highly successful car with a huge following and good aftermarket support, it never enjoyed the dominance of the import scene that its arch rival the Honda Civic did.  The main reason was that although these Sentras were equipped with the potent and bulletproof SR20DE engine, they were hamstrung with a buttery transmission.  The transmission was not buttery as in smooth shifting but buttery as being hamstrung with gears as strong as butter.

The transmission was much weaker than the Civic transmission and hampered the efforts of the Nissan camp in getting the Sentra SE-R into the record books in competition.  The SE-R did manage to get into the 10’s then even the high 9’s in import drag racing at a high cost in broken transmission parts. Nissan transmissions might last one or two passes, a point that Honda’s didn’t reach until they were deep into the 9’s and even the 8’s. Guys with hot street Sentras were going through trannies on a weekly basis and sometimes trannies even broke on the dyno! The transmission made it impossible for Nissans to go any faster and as engine development improved, the Hondas simply dominated and Sentras were forgotten. The weak transmission has also hampered the car in any sort of competition that its owners have tried to compete in from road racing to off road rally.

Although we are talking about helping a Nissan FWD tranny here, these same tricks will work on any sort of transmission, so owners of WRX’s, EVOs, DSM’s and GT-R’s take note.  These tricks will help the failure prone trannys and transfer cases on your rides hold together as well.

Is there no hope for the owners of the SE-R?  Well, although the cure is elusive the situation can be helped quite a bit.  The Nissan FWD five speed transmission is exceedingly weak.  It can only hold around 170 whp in any sort of long term use and starts to become a very iffy proposition when the power levels exceed 200 whp.  The gears are narrow, with third gear being amazingly, dumfoundedly narrow.  The shafts are spindly and unsupported with wide spans between bearings which allow gear spreading flex.  The transmission case is thin and weak; it cracks and flexes allowing the gears to spread apart reducing the tooth engagement precariously and making things even more likely to fail.

Is this situation hopeless?  No, although this transmission is basically a bunch of turds in a potmetal case it can be helped.  The first things to do are pretty simple and can be done by most anyone.  The first step is to switch the gear oil to Redline Shockproof Heavy.  This thick, clingy 250 weight gear oil sticks to the gears and helps cushion them from shock.  Shockproof Heavy makes a pretty big difference in how long the transmission can last.  The thick oil does have a penalty.  It robs about 3-5 whp from the engine’s output but that’s better than a broken transmission.  Next, some heavy duty motor mounts are in order. The stock Sentra motor mounts are exceedingly weak and are made of hollowed out rubber allowing a lot of engine movement.  The motor mounts allow so much movement that the transmission case can pound on the crossmember hard enough to crack the case.  Flexing mounts can also contribute to wheel hop, the pounding forces of which can also lead to the transmission breaking.  Replace the motor mounts with Jim Wolf Technologies heavy duty mounts.  These are solid rubber and are much firmer and transmit more vibration to the car’s interior.  If you want something a little smoother, Energy Suspension makes urethane inserts that beef up the stock mounts.

With these simple mods, your transmission is not likely to break with bolt on modifications at up to 180 wheel hp.