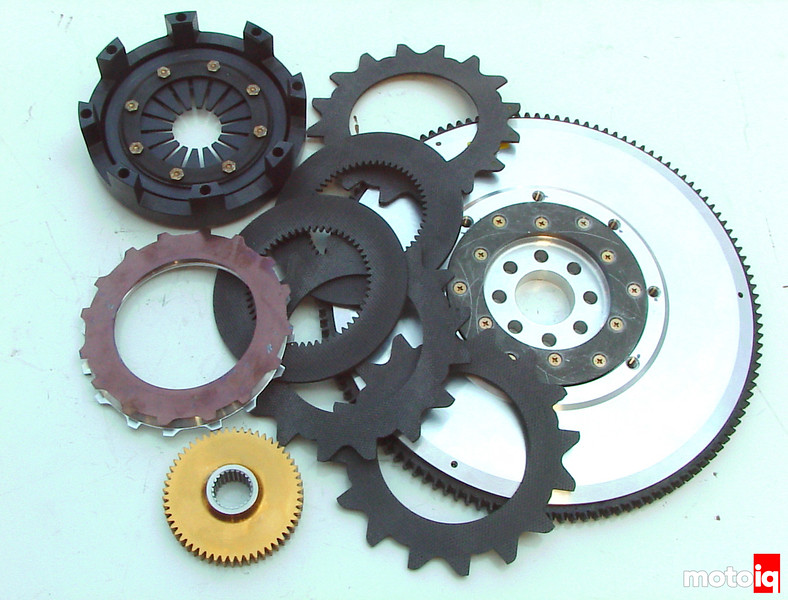 In parts one, two and three of our series of the inner workings of clutches, we covered how the three main parts of the clutch, the pressure plate, the disc and the friction material work. Now that you probably have more than enough information about how basic clutch systems work, we will go on and explain the workings of some of the more exotic clutches and delve into the world of flywheels a bit. Finally we will talk about a little bit of clutch trouble shooting.

A car uses a flywheel as a storage device for torque. It takes the engines power to spin a flywheel up to speed. Due to the physical laws for the conservation of momentum, a body in motion wants to stay in motion and thus a spinning flywheel wants to stay spinning due to the energy imparted into it from the engine. This is called inertia. When you rev a cars engine the flywheel stores energy in the form of torque in the flywheel. As you let the clutch out to get the car moving and the clutch disc starts to engage, you start to transfer some of this stored energy to the wheels to help get the car rolling smoothly. The car starts to roll and you let the clutch pedal out fully. You have transferred all of the stored energy into rotating force to get the car rolling.

If it wasn’t for the flywheel, it would be exceedingly hard to get the car rolling from a dead stop smoothly and you would really have to rev the engine and slip the clutch to prevent things from stalling. This is difficult for the driver and it is hard to engineer a clutch that could hold up to this sort of slipping for long. I bet that nearly all of us at one time or another has used a flywheels energy storage capacity to have a little fun. Even the lowest powered car can do an impressive burnout if you rev the engine high enough before dumping the clutch. If the engine doesn’t have enough power to spin the tires, no problem, rev that sucker as high as it will go, store that power in the flywheel, dump the clutch pedal and slam it to the floor. The stored energy in the flywheel will help even the feeblest engine to smoke em.

If a flywheel is so useful, why does the tuner want a light flywheel? Well, it takes power to change a rotating masses speed. This is derived from Newton’s second law F=MA where F is the force which equals mass times acceleration. Without sounding like a physics professor, it takes power to spin that flywheel up to speed. Racers try to get the weight down as low as possible for this reason on every component in the car that spins, light cranks, rods and pistons help the engine rev faster, lighter wheels help a car accelerate faster. It only makes sense that using the lightest flywheel with the lowest inertia as practical will help an engine rev faster and make a car accelerate quicker.