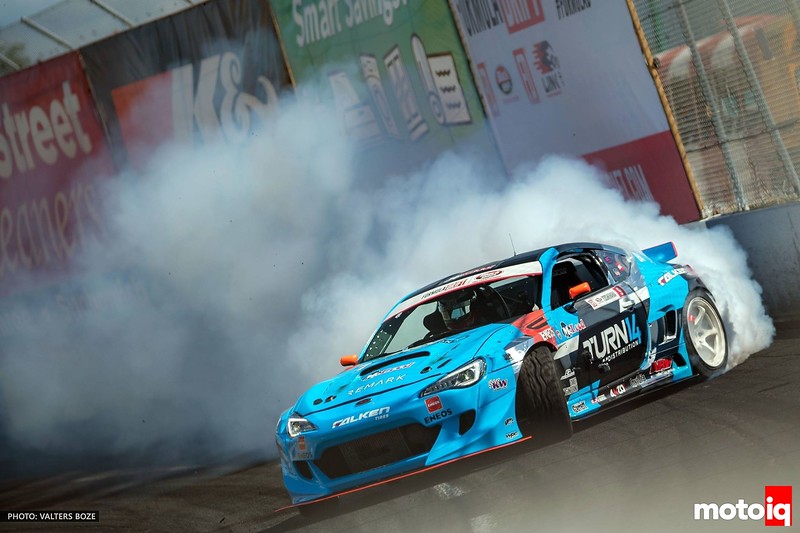 When we first got started with our technical involvement in Formula Drift’s Pro Series 10 years ago, the state of the art in drift car braking was something pretty basic. The front brakes were usually a medium-sized 4 piston caliper with a solid disc two piece rotor like something from a Sprint car that was designed for light weight and medium clamping force. A dual master cylinder with a balance bar was used. For rear brakes, a solid rear 2-piece rotor was squeezed by two small 4 piston calipers.

At the time, 450 hp was considered adequate for drifting and tire development was a few generations behind what it is now. About this time Pro drifting was starting to undergo a technical revolution and advances in tire and suspension technology would soon take the sport to a new level.  If you doubt it, go on YouTube and look at FD competition circa 2008 vs now, you will be amazed at how much the sport has evolved.  Our current Pro-Am Drift League drivers are better than the top pros back in the day!

Here is a typical state of the art front brake setup from 2008. A medium-sized 4 piston caliper with a lightweight two-piece solid front rotor.  The rotor was a sprint car part which was also used in some drag racing applications. The cars were much slower in those days and the brakes were only used to position the car.  Only a few drivers like Tanner Foust, Rhys Millen, and Samuel Hubinette did much left-foot braking.  The cars were much slower and the needs for really powerful brakes didn’t exist. Light weight and braking power were important but fade resistance was not an issue.

Rear brakes consisted of two small 4-piston calipers, one activated by the brake pedal and the other by a hand operated lever. a lot of people used two piston or OEM single piston calipers at this time as well.  Again a solid two-piece rotor is used with the emphasis on lightweight over thermal resistance. The rear brakes were mostly only used to help initiate the drift.  In those days the brake bias was set up much like in road racing with only a slightly greater than typical front bias. Left foot braking was more used as a weight transfer trick to help initiate drift and only a few drivers consistently did it.

Fast forward to what was used in around 2013.  In 2012 some guy named Daigo Saito came from Japan and turned the drifting world upside down.  Daigo is the guy responsible for the era of the 1000 plus hp cars.  With his overwhelming horsepower, sticky Achilles tires and unconventional (for the USA) driving style, Daigo dominated for that season and left everyone thunderstruck. Daigo single handily launched a technological war where the other tire manufactures greatly improved their performance while the car builders made huge gains in power and suspension.  The drivers also upped their game while Formula Drift changed their style of judging to make Daigo’s, lunge at you, knock over all the cones style less of an advantage to favor more of a door to door follow with high angle over speed being favored.

This greatly changed how drivers drove and created a different emphasis on brakes. Since cars now had a lot more power with gripper tires a lot more was demanded of the brakes.  To drive with more angle and generate more smoke while keeping powerful engines in their powerband, more drivers started to adopt heavy left foot braking with less rear bias on the foot pedal, often using the brakes to adjust the angle while keeping the engine on the boil. These changes to the sport also meant that brake systems had to change.

Here is a front brake system from that era. The solid rotor has given way to a vented rotor albeit a thin one with minimal venting and the caliper has evolved into a larger six-piston unit.  This is a big step up from the circa 2009 brake system. The Best of 2018- Project EP3 Civic Si: Why the Suspension Sucks and How to Fix It!