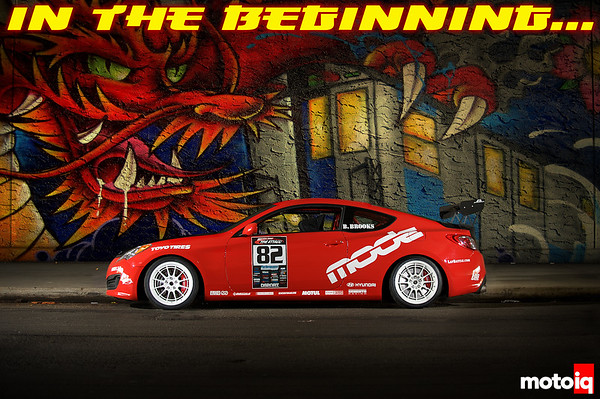 text and photos by Jeff Naeyaert

So starts the first line of Genesis, the first chapter of the Bible describing how the world as we know it was created.  Hyundai Motors also put the title Genesis on their new sports coupe, a car that is obviously intended to announce that Hyundai has set out to break their stereotypical mold as a manufacturer of price point leading, inexpensive, value oriented cars. It is obvious that Hyundai now wants to be seen as a world class maker of cutting edge performance cars.

With rear-wheel drive, a limited slip differential, Brembo brakes, a sophisticated suspension system made up front struts with dual-pivot lower control arms with a multi-link rear, and best of all, the Theta 2 liter turbo motor that shares heritage with Mitsubishi's powerful 4B11 or a 306 hp V6, the Genesis has all the makings of a serious performance coupe.  We at MotoIQ are excited to bring you one of the first purposely modified Hyundais that we know of in existence.

Billy Brooks, the owner, driver and lead engineer of Mode Racing, saw the performance potential of the Genesis and has embarked on the difficult task of developing it into a cutting edge Time Attack car for the Redline Modified Time Attack class. Mode Racing is a new tuning company that is about to launch a line of parts catering to the Genesis, WRX, EVO and GT-R. The car is being built as a rolling showroom for Mode's parts and technology.

Billy teamed up with “Big Tom” Oathoudt, a well known Nissan Tuner, to develop the car for competition.  Tom's first goal was to eliminate as much weight from the car as possible while staying within the rules for Modified class.  This meant that the stock glass, door panels and dash had to remain in the car.  The rest of the car's interior was removed as well as any other easily removed, unneeded parts and bracketry.  To reduce weight, the stock hood and truck lid were replaced with carbon parts from Rhys Millen Racing with an APR GT300 carbon wing providing lots of additional downforce with minimal weight.

The interior features a Sparco Circuit Pro racing seat with head protection that helps to shield the driver who is held firmly in place by Schroth harnesses, from harm.  A Sparco steering wheel with a quick release hub provides an ergonomic driver interface. A racing radio helps keep Billy in communication with the pits manned by the RaceRubber.com crew while he's on track.

After the interior was gutted, a custom cage was constructed of 1.75″ DOM mild steel tubing with a 0.120″ wall thickness.  The cage helps with both driver safety and to stiffen the chassis to aid suspension tuning.  After adding the cage, the car's weight was a portly 3,140 lbs, despite a savings of 400 lbs less than stock!  Handling is key in Time Attack, and no expense was spared with the suspension.  Sophisticated JRZ remote reservoir, 3-way adjustable dampers were fitted on all four corners.

Lightweight Enkei NT03+M wheels were selected as the rim of choice for the Genesis. These lightweight wheels use Enkei's proprietary MAT process, a spin forming operation that draws the cast wheels rim section over a mandrel while it is turning.  This strengthens the wheels highly stressed rim section through grain refinement caused by cold working the metal during forming.  The metallurgical changes to the rim seen in MAT are very similar to those of forging.  MAT helps a cast wheel get much of the lightness and strength associated with forged wheels at a lower cost, giving a good bang for the buck. 18×10″ rear and 18×9″ front wheels were used with sticky Toyo 888R race compound rubber, 285/35-18 rear and 245/40-18 front.

Braking is also just as important for Time Attack.  The Genesis comes with state-of-the-art Brembo brakes as standard equipment but they were not enough to stop the heavy Genesis with big sticky tires.  Although it would be a considerable challenge to come up with a braking system better than the stock one, StopTech stepped up to the plate with a powerful braking system consisting of huge 14″ two-piece floating rotors clamped by 6 piston front and 4 piston rear calipers. Pagid race compound brake pads resist fade, even with the demands placed on them by the heavy car.  Braided steel brake lines and Motul RBF 660 fluid is used.  A highly tunable Cusco RS 1.5 way differential lubricated by Motul 300V gear oil helps put the power to the ground efficiently. Motul lubricants also protect the transmission.