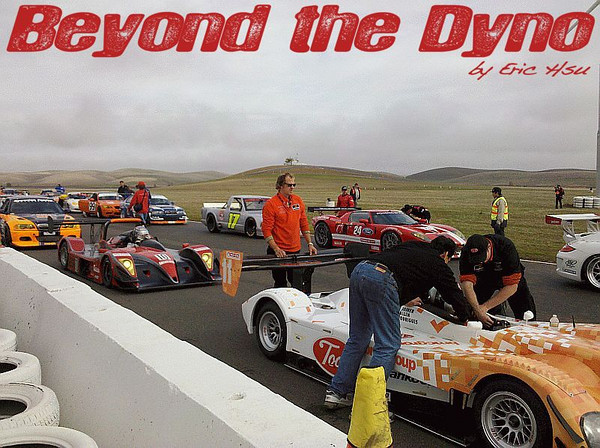 In part 1, I mentioned that the original delivery date of the engine was to be mid-October to allow the guys at BMC Tool Racing team ample time to test and develop the car. There really wouldn't be ample time to fully develop a car in a month and a half, but MJ and TJ had to make the best of it. Due to delays in piston delivery, we had to give BMC Tool a revised engine delivery date of November 15. With the 25 Hours of Thunderhill happening on December 4, the  team would really only have a couple of days for testing and shake down before making the trip from Los Angeles to Thunderhill let alone any development. While Cosworth makes one of the finest pistons in the world, the factories also seem to put everything second to F1. The Mazda MZR pistons are made on the same machines by the same machinists as pistons for the CA2010 F1 engines.

These are some of our standard normally aspirated 11:1 Duratec pistons. While they don't look like anything fancy from this angle, it's the details that set them apart from the bulk of the American shelf pistons. A proprietary 4000 series alloy (these things do not crumble apart like your typical 4032), triple barrel shaped skirts, offset pin, tool steel pins, strutted pin boss supports, unique pin oiling, fully milled under crowns, and abrasive paste deburring (aka extrude hone) on the undersides are a few details that set them apart from other off the shelf offerings.

What happened once the engine got on the dyno was a bit difficult to remember because it all happened so fast due to all of the coffee, late nights, fast food and 18 hour days (luckily I quit smoking because those would have been 2 pack days), but after a problem with a piston ring, the engine had to be removed from the dyno. At Cosworth, there are only usually thoroughly developed engine programs and rarely is anything done on a custom basis. Since we do not normally build turbo Mazda DISI engines for customer use, we basically stuck to a combination of internal parts that were proven on the dyno in past turbo Mazda DISI engine projects…except for the piston rings. For some reason we have multiple 87.5mm Duratec piston rings that have very similar part numbers and very similar dimensions, but were mixed up. With the wrong ring in the right groove (not enough groove depth), let's just say we had some issues…

Since we did not have oversized pistons, a new block was needed since the bores were scuffed up by the incorrect rings. At this point we already had to tell BMC Tool that we would have to push the engine's delivery date back another week to November 22 giving them even less time to test, tune, and develop the car. Since the car would have many new parts and systems on it such as the radiator, intercooler, turbo system, gearbox oiling, oil cooling, sensors for data logging, new damper valving, new spring rates, etc. it was important to get some track time to at least shake down the car. In my opinion, I didn't think the car was quite ready for the engine anyway. There was MJ, TJ, David, and a couple other guys working on the car at this point and while the car was slowly beginning to look like a car again, I thought even if they had an engine, they would still be almost a week anyway. It turns out I was kind of right since they could have used the engine a couple days earlier than November 22.

The Garrett GT3076R with .82 A/R turbine housing is nestled deep inside of this cluster of tubes. Due to the lack of time, we ended up using a cast iron exhaust manifold sourced from the guys at Mazda Motorsports. While it is far from optimum for a race car, it did the job at low boost levels. Since the turbo positioning wouldn't work directly off the exhaust manifold, an “extension” was made to locate the turbo lower. This was also far from ideal, but also did the trick. A TiAL MV-S water cooled wastegate bypassed the excess exhaust gasses from the turbine stage. A TiAL Q 50mm BOV handled the blow off valve duties. The exhaust system was 3″ from turbo to the tip and was quieted further by a Coast Fabrication custom 3″ internal diameter muffler. With the turbo and muffler, the car turned out to be the absolute quietest car on the track. Whenever it was on the front straight, you would only hear the wine of the straight cut gears.

The XS Engineering 18″ x 10″ x 3″ tube and fin intercooler with a pair of their modified CT9A EVO end tanks handled intercooler duties. It was 6.2 pounds lighter than the original stacked plate core that was originally considered. Cast aluminum end tanks were used because welded tanks were considered a potential point of failure with the constant on and off boost over 25 hours. With more time to test, I'm sure a welded or formed sheet aluminum piece could have been tested, but there was no time. Cast it was. Underneath the intercooler is a giant C&R oil cooler from a Mazda Rotary powered version of the Panoz DP-02 that Star Mazda builds for a race series. The oil cooler is even longer than the intercooler. The long intercooler tube is still shorter than many front mount intercooler systems in street cars. There were absolutely zero turbo lag complaints from the drivers.