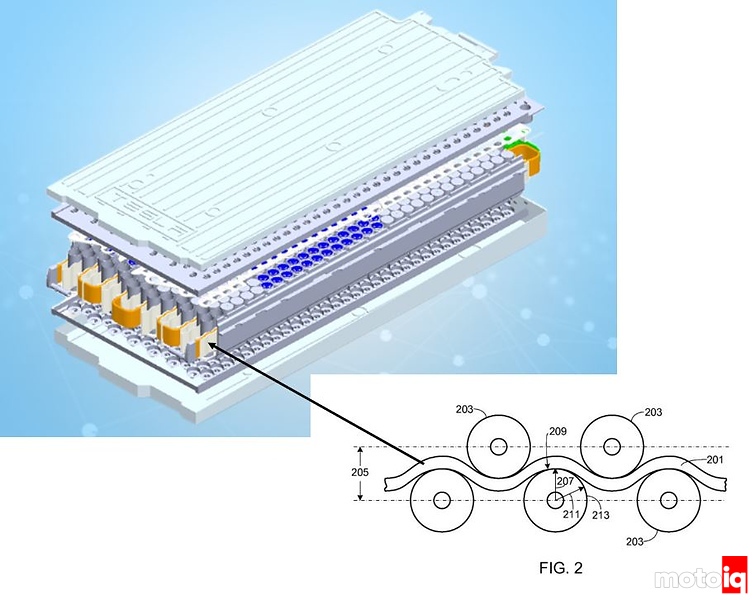 Tesla’s basic design is using an aluminum cooling ribbon that snakes between the cells in the module. A thermal gap pad covers the cooling snake to make contact with the side of the cells. The snake is roughly half the height of the cell and only makes contact with a small percentage of the circumference of the cell. The first-generation Model S battery module only had one snake going through the entire module. This is really bad. As the coolant enters the snake at the beginning of the module, it starts to pick up heat. By the time the coolant has reached the end of the module, the coolant is much warmer. Therefore, the battery cells at the end of the snake are much hotter than the cells at the beginning of the module. As Nissan Leaf owners found out, the hotter the cells get, the shorter they live. So within the first generation Model S battery module, one could expect the battery cells at the end of the cooling snake to have less capacity over time vs the cells at the beginning. So this design has a lack of contact surface area for heat conduction along with poor cell temperature distribution. It’s still better than a Nissan Leaf. Tesla made an upgrade to the Model S module by fitting two snakes in there which probably improved the cooling about 50% and reduced the difference in temperature between the hottest and coldest battery cells in the module which increases battery life. The Model 3 battery module design has something like 7 snakes all running in parallel straight down the module. Hence why the Model 3 has much improved performance on track and with charging. Porsche’s stated goal with the Taycan was repeatable performance use as they know that’s where Tesla falters. Quicker charging is also a result of having a system that can be driven hard for a long time. As I stated, I don’t think there’s anything impressive about the Taycan cooling system. So, there has to be something else going on that allows the Taycan to driver harder and charge faster than anything else on the market.

This is where we have to step back and look at the entire system. In this case, it seems Porsche going to the 800V system is the primary differentiation from everyone else. Doing an 800V based vehicle architecture must have been at great expense to Porsche because all the existing EV powertrain parts out there are for 400V systems. Therefore, Porsche ended up designing a lot of new parts instead of being able to use more off-the-shelf parts. To understand where 800V versus 400V comes into play, we have to become familiar with Joule heating (also known as Ohmic heating).

Any electrical conductor has an internal resistance. For example, copper has a lower electrical resistance than aluminum. When you push electrical current through the conductors, some of the current turns into heat due to the resistance of the conductor. This is Joule heating. Remembering our basic equations about DC electrical current, Power = Volts (V) x Amps (I). Volts = Amps x Resistance (R). P = V*I, V = I*R. After a little rearranging, P = I^2*R. Battery cells have an internal resistance too. So, you can see that the heat (power) that the battery cooling system has to reject from the battery cells is a function of the current squared times the resistance.

I found numbers for the quantity of cells and capacity of the Taycan and Model 3 battery packs. Accuracy may be off a little, but it clearly illustrates the benefit of Porsche using the 800V system. A quick note, ‘400V’ and ‘800V’ are not true numbers. Li-ion cells have a nominal voltage around 3.6-3.7 volts, a peak voltage of 4.2V and a end of charge of around 3.0V. So, the nominal voltage of the Model 3 pack is around 360V and the Taycan around 720V. I found numbers for the time to charge for the stated range of State of Charge (SOC) and calculated the average kW and therefore amps. I tried to find similar SOC range to minimize the variables. Anyway, notice the Taycan charges at about 50% higher power than the Model 3 but at a current that’s about 1/3 less. Because Joule heating is to the square of the current, the heat the Taycan has to reject compared to the Model 3 is about half. So, even though the Taycan doesn’t have a stellar battery thermal system, it only has to reject about half the heat compared to the Model 3.

Porsche’s pack level resistance may be lower because it has a magnitude fewer cells. I’m assuming the Taycan battery modules are essentially the same as those in the Audi e-tron which uses 12 pouch cells of 60Ah capacity each. The cylindrical cells in the Model 3 are around 5Ah each. Doing some quick math, the Model 3 needs 12 2170 size cylindrical cells to equal the capacity of one pouch cell in the Taycan. Maybe we can assume one massive cell has less resistance than 12 smaller ones wired together. Also, every battery cell has two electrical joints which means two spots of additional resistance. The Model 3 has about 10x more battery cell electrical joints. There are a number of other factors like the resistance of the HV connectors, the sizing of the HV cables and electrical busbars and things like that. But 10x more battery cells and joints is a big magnitude difference in the resistance summation game. The higher individual capacity of the pouch cells may be the significant contributor to the lower overall pack resistance compared to the Model 3 in addition to the system operating at 800V.

Another system level consideration is this gap between the battery modules in the pack. The gap is there to allow a place for the feet of the rear passengers. Passengers are the next heaviest thing in the car, so having people sit lower  reduces the center of gravity. It also allows the roof line of the car to stay lower for better aero. It’s just a pain in the ass for the battery hardware engineers to do the rearrangement of the battery modules, cables, cooling, etc.