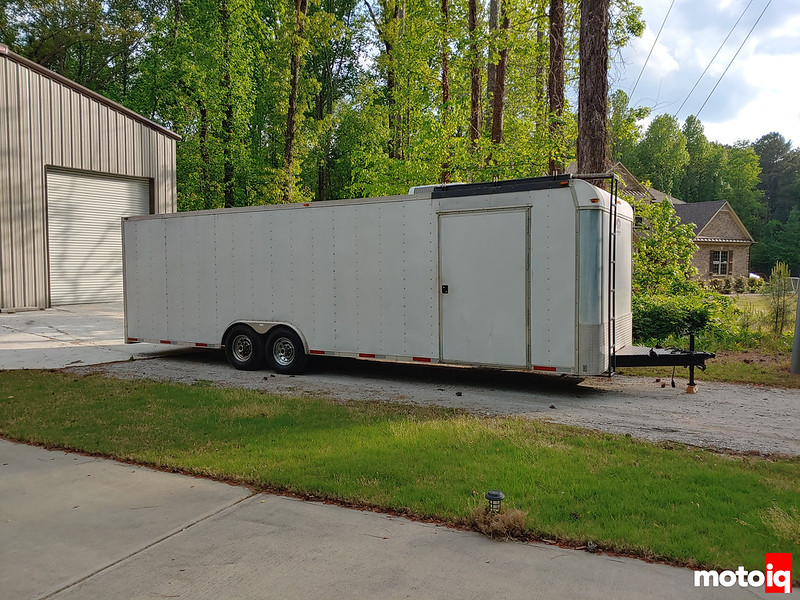 If you remember our Winch2Go article or our ultimate open trailer series, you know we are serious about trailering here at MotoIQ. Unfortunately, Project SC300 now has a massive front splitter, and getting on and off the open trailer was impossible with it still attached. Further, we wanted to swap from the E350 van to a more common F250 7.3 truck. But we could only switch to the truck once we got an enclosed trailer. So here is a 28′ enclosed trailer!

There are several benefits to going with an enclosed trailer if you have the space, towing capacity, and fortitude for one. While we had reached a point where we could keep everything in the van between events, we wouldn’t want to sleep in the van, and it would’ve required pulling everything out of it anyway. If we stayed in a hotel or went to dinner, everything for the track came with us in the van. That is a bit of a pain. Additionally, the van is a little noisy in the cabin, while a truck is much quieter. With an enclosed trailer, all of the stuff can live in the trailer, the truck can be relatively empty, and then the truck can easily leave the track. Lastly, with air conditioning and a sleeping bag and/or cot, the enclosed trailer can work as a sleeping quarters. Most of the race tracks in the South East actually have decent shower facilities, so it’s really not a bad deal.

With this enclosed trailer and a new (to us) F250, we should simply be good to go, right? Well, not quite. First, with any used vehicle purchase (yes, a trailer is a vehicle), there is a LOT of maintenance to do. Brakes, bearings, air conditioning, and just about everything on this nearly 20yo trailer got a once over, and much of it needed some help. That’s not to say that the previous owner didn’t take care of things, but rather that the things were old enough that they needed tending to.

Was that all there was to it? Unfortunately, no. This trailer has nice cabinetry but no winch. So the first order of business was reaching out to Holley’s Anvil Off-Road to see about getting some assistance with a gentle tug. Well, more accurately, the first order of business was spending hours and hours pouring over different winch manufacturer websites before finally reaching out to Holley.

Holley has become a massive conglomerate of brands. So unsurprisingly, there was some off-road equipment in the mix. The Anvil Off-Road brand happens to have an interesting selection of winches. You might be wondering why we chose such an insanely massive pull rating. You surely recall from the Winch2Go article that pulling a rolling object on a flat surface doesn’t require 100% of the vehicle weight as pull rating, but pulling up a ramp usually involves some higher percentage of static vehicle weight. Knowing that, a 17,000lbs pull rating for a 3480lb race car seems nuts, right? There were a couple of factors that went into this choice.

The winch market is absolutely saturated with choices from all across the spectrum of price, quality, and features. Given that this was a 28′ trailer with a large rear door and that we would inevitably need extension ramps (oh, would we – just you wait), we were able to quickly rule out any winch that had less than 40′ of rope. And, since pretty much none of the winches with wired controls have 40′ of control cable, we needed something wireless. So that cut down the available choices more.

From what was left, we had already gotten up in the price range once the rope length, wireless capability, and 5000lb minimum pull were considered. And this is why the Anvil winch ended up looking like such a great choice. It had a 91′ synthetic rope with both a wireless and wired remote included and was 17,000lb capable. It did this for a price that was less than many winches that were only 6,000lb capable with wire rope! It seemed like a bargain.

If you additionally consider the fact that it’s possible I will prang this car someday and need to drag it onto the trailer with a dolly, that 17,000lb capacity starts to actually look not just nice, but potentially necessary.