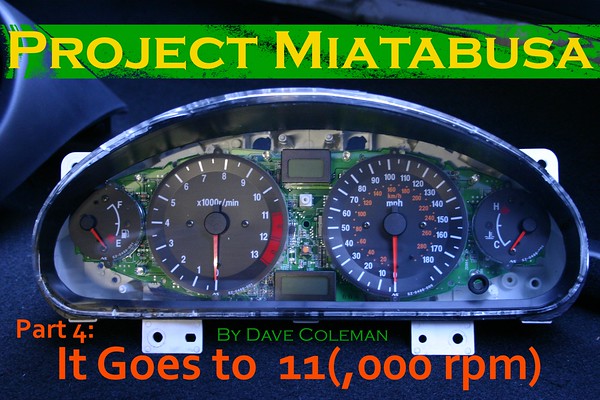 Project Miatabusa is progressing on several fronts, with wiring, fuel delivery, induction, exhaust and subframe projects all happening in parallel. With three guys spread across so many projects, none of them are actually finished yet, but there's so much progress happening, it's time that we stop for a few updates. Over the next few days I'll be documenting the progress on each of these projects, one by one.

First up, the instrument cluster. Gauges might seem like a detail for later, but with massive wiring projects going on (more on those later this week), we have to know where the wires are going to go before anything can go back together.

All else being equal, keeping the Miata cluster might be easier. The temperature gauge problem could be solved simply by sticking the Miata temperature sensor into the cooling system somewhere (you'd want the stock sensor to stay in place so the ECU could still do cold enrichment), and watching the needle wrap past the end of the stock gauge would be endlessly entertaining.

All is not equal, though. The Hayabusa cluster includes some diagnostic features we don't fully understand yet, and we don't want to fire up the first ever Miatabusa without all parts of the system in place. For the first car, at least, bringing the whole Hayabusa cluster into the Miata seemed like the way to go. The first idea was to remove the Miata cluster and just stuff the Hayabusa cluster in the hole. That's the kind of quick, simple shortcut I'd normally take if I were building a car by myself. But when Tim Taylor is up in his machine shop making fancy billet parts for one end of the car, I can't in good conscience be ghettofabbing the other end of the car. Tim has forced me to raise my game.

Eyeballing the two clusters, they're remarkably similar in size. If I could fit the Hayabusa cluster's guts into the Miata housing, the Miata housing would work as a perfect mounting bracket.

Making room for the Hayabusa cluster first meant taking out the Miata's gauges. Once you remove the instrument cluster, each of the gauges is held to the back with a couple of screws. Total destruction is only a few minutes away. The Miata gauge shroud easily snaps off the cluster housing, but it's an integral part of the assembly and can't be removed if we want to keep the gauges behind “glass” (plastic) like they are from the factory. Time for some Dremel action. The Dremel tool first has to be used to carefully separate the glass (plastic) from the shroud. These seem to have been heat fused together as they were quite stubborn about coming apart. The clear plastic is also terribly brittle and would be easy to shatter if you aren't careful with it. A few tense minutes with the Dremel and the shroud is ready for anything. Now, the back of the cluster has to be cleared out of all the mounting bosses and warning light housings. I did most of this damage with the Dremel tool, but it turns out that if you remove all the light bulbs from the back of the housing, it can be clamped down to a mill and hogged out with real man tools. The first test fit was promising. That eyeballing I did was remarkably accurate. Now would be a good time to mention that my car was broken into, right out in front of Miatabusa world headquarters, and my camera and computer were involuntarily donated to the local pharmaceutical distributor. This installment was shot almost entirely with my cell phone, which happens to be very bad at macro focusing.

Enough excuses. The black line on the fuzzy circuit board below is where the edge of the Miata housing interferes with the board. Checking both sides of the board, it turns out I could cut this off without altering any circuits. And there it is, a perfect fit! There are still details to work out. The white junk in the background needs to be black. The circuit board actually has to be attached somehow (it's just floating in there right now), and two of the gauges need to be figured out.

The gas gauge has to be calibrated, but that shouldn't be that hard. Both the Hayabusa and the Miata have a float moving a rheostat in the gas tank, so both are just moving in response to resistance. All we have to do is measure the range of each fuel sending unit and then make a simple circuit to make the Miata's signal look like the Hayabusa's signal.

The speedometer is vastly more complicated. The Hayabusa speedo gets its signal from a Hall effect sensor on the output shaft, while the Miata gets its signal from… a cable. The plan is to get the Hayabusa's Hall effect sensor to look at something on the Miata's output shaft or driveshaft, then adjust the signal with one of the many speedo calibration tools available for the Hayabusa. Changing final drive sprockets is common practice in the bike world, so tools for adjusting speedo readings are cheap and easy.

More on this project when we have it all figured out.