In part one of Project NSX we went through the transmission of our NSX to address some of its weak points – following the guidelines in our “Building the Bulletproof Transaxle” article. Before putting our transaxle together we installed and tuned an OS Giken Super Lock limited slip differential to replace the factory Honda unit.

Differentials are used in a car so that the driven wheels can rotate at different speeds through a turn. This is important because while in a turn, the outside wheels have a longer path to travel (due to a larger radius) and make more revolutions than the inside wheel. A differential allows this to happen without resistance using engine driven orbiting spider gears that are in mesh with bevel gears which are attached to the axles.

In vehicles without a differential such as a kart, the axle is solid and locked (aka: spool) with both driving wheels forced to rotate at exactly the same speed, pushing the car straight. By nature a differential wants to send all of the engine’s power to the wheels with the least amount of traction; the path of least resistance. The side effect of this is unwanted inside wheel-spin out of corners, and even single wheel spin on straight-aways (aka: peg-legging, one-tire-fire, etc…) which greatly affects acceleration since the power is not able to be put to the ground efficiently and is lost through the inside unloaded tire.

When accelerating out of a corner, the inside tire represents less than half of the available grip compared to the outside loaded tire. Under aggressive driving conditions, this wheel spin also makes a car difficult to steer with the throttle because the inside tire will spin and the car will not rotate under acceleration, or slide/drift. Because of the shortcomings of conventional ‘open’ differentials, they are not desirable for either fast lap times or ability to rotate and throttle-steer cars.

For a really good, easy to understand video to explain this check this out!

A limited slip differential fixes this problem by resisting the differentials tendency to deliver all of the power to the free spinning wheel. It accomplishes this by reducing the difference in speed between the two driven wheels and thus delivering the engines torque to both wheels. 1991-1994 NSX’s like our project NSX have conventional clutch-type limited slips. These limited slips use driven and drive clutch plates preloaded with a cone-spring (Bellville Washer) to provide a resistance to the bevel gears spinning against each other at different speeds. This resistance helps keep the driven wheels spinning at closer speeds to each other rather than the big discrepancies between the two wheels like in an open differential. The amount of limited slip resistance is controlled solely by the preload of the cone-spring which in the case of the stock NSX is pretty light. This is fine for the output of the stock engine with soft stock suspension and small tires but as you increase the power and grip, the locking ability is not strong enough and inside wheel spin rears its ugly head again. While the stock LSD unit can be preloaded to be ‘tighter’ and more aggressive, it still has shortcomings in locking ability, design, and tune-ability. For our turbocharged engine, and planned bigger and stickier tires, this was not going to cut it.

The OS Giken “Super Lock” LSD is a more advanced design of a limited slip called a Salisbury differential. The Salisbury diff is one of the most common designs in racing cars and uses cone-spring preloaded clutches to provide the limited slip action just like a conventional limited slip but with a twist. The cross shaft of the spider gears is actually a cam that rides in a hole between two half’s of a split carrier that is driven by the ring gear of the differential.

As the ring gear applies torque to the differential case and the carrier, the cross shaft cam which is coupled to the wheels is wedged into the carrier’s “ramps”, applying force that wants to split the two halves apart. This force squeezes the differential’s clutch packs. As more torque applied to the differential, the more the clutch plates lock together and prevent differences in wheel speed. 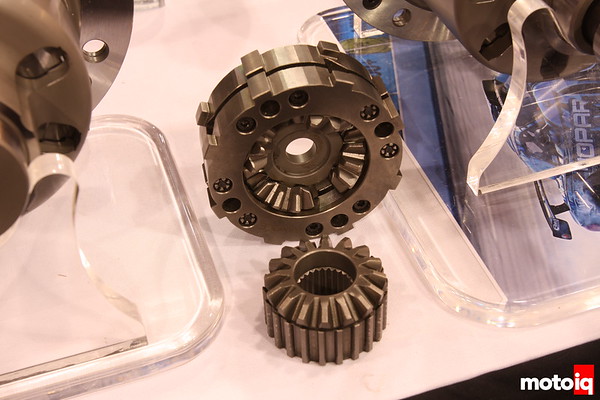