If you have been following the progress of Project AP2 S2000, to prove my motor and turbo combination, I drove the car around for a while avoiding boost to test the installed parts bit by bit; the goal to have everything working perfectly for the dyno tuning session. I decided to go ahead and go for the dyno because I was a bit anxious to get this car done. It’s only taken thirteen years or so to get to this point.  However, there was one part of the turbo system that was acting a bit weird. We ran into an issue during dyno tuning because of the funkiness that initially gave us some substandard results.

I went to Church Automotive Testing to tune and dyno the car and got the initial results. The three sets of runs shown here are: stock from around 10 years ago when I got the Hondata KPro installed, 9psi of boost, and 13psi. One of my concerns with the exhaust manifold design was not having sufficient wastegate flow resulting in boost creep. The 9psi line is running straight wastegate pressure with the Turbosmart Comp Gate 40 with 7psi spring. The Garrett G25-660 turbo with the 0.72 A/R turbine housing is already making 2psi of boost at 2000 rpm which is why the torque is at 170lb-ft compared to the stock 140lb-ft. Running straight wastegate resulted in 220lb-ft of torque from 3500-8000rpm. Note that the higher boost line spools up a bit quicker and that’s because we used the boost solenoid to keep the wastegate shut a bit more.

9psi of boost is about a pressure ratio of 1.61. At 4000rpm, 9psi of boost is about 170hp and stock was about 110hp for a ratio of ~1.55. So, the math checks out, and the total system flow is still good at this particular point. However, at 8000rpm, it’s about 325hp over 240hp which is only 1.35. I did keep the stock rear dual muffler section that Honda designed for 240hp of flow. Trying to push through a lot more flow means a lot more backpressure and it’s showing in the upper rpm range even with only 9psi of boost. I tried to reduce backpressure by going with the large diameter GESI cat and 3″ mid-pipe, but the total flow area of the stock rear dual muffler layout is a bit less than that of the 3″ diameter pipe.

The top line on the dyno chart is 13psi and a big reason that the torque curve drops like a rock at the upper rpm range is because I goofed during the part installation; more on that in a minute. The intake air temps were skyrocketing during the dyno pulls. I ended up holding the air blower cooling the car straight onto the liquid-to-air intercooler’s heat exchanger to help cool it down between pulls which made no difference. The engine coolant and oil temps were just fine though thanks to the Koyo radiator with neither going over 95degC the entire time. Church had tried a 15psi pull, after the intercooler cooled down a bit, but there were no gains to be had. With the exhaust restriction, more boost was just resulting in a lot higher exhaust manifold pressure which prevented any additional power gains.

These plots show my turbo setup against Church’s track s2000 running e85 with a centrifugal blower. His S2000 made 460hp, but my turbo setup on 91 octane made more power everywhere below 7000rpm. At 4000rpm which is where you’d be on the street, it’s 80lb-ft torque advantage to the turbo. Doing E85 with the turbo is very tempting… It would add potentially 80hp.

The reason why intake air temps were getting super hot and killing the power was because there was no coolant flow through the system. There was no coolant flow because I left in the shipping hose barb plug in the coolant line for the intercoolers heat exchanger. Oops. Mistakes happen when you’re in a rush, so try not to rush. The blocked coolant flow explains why the coolant pump was making interesting noises and I had a hard time pulling vacuum on the system. I thought the intercooler coolant system wasn’t quite acting normally, but it was also my first time making such a system and using these parts. I should have gone with my gut, but I also didn’t want to rip everything apart. 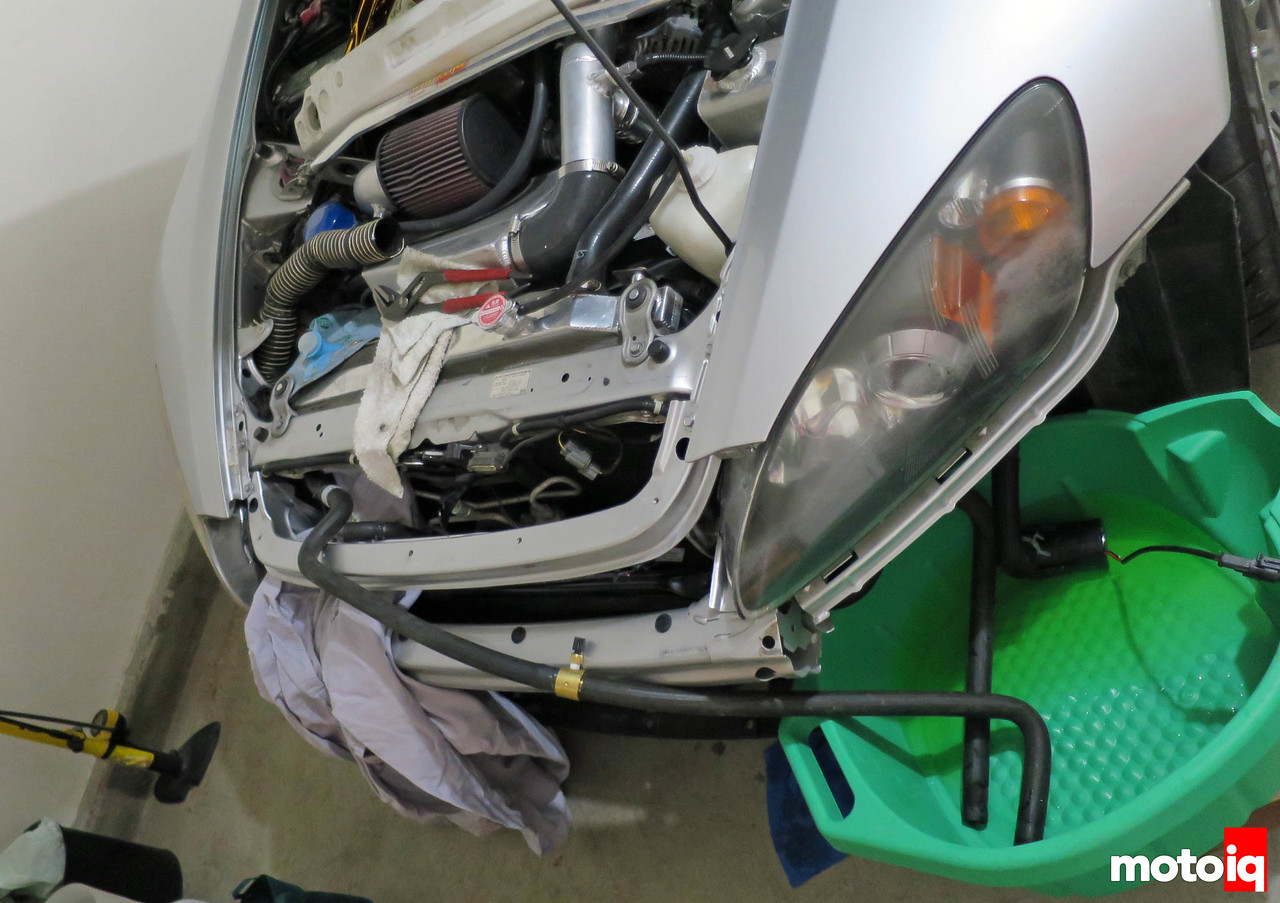 Of course, I ended up ripping everything apart anyway. I found the plug by doing a check of the coolant flow through the system. First, I tried the whole system with the coolant exiting the front heat exchanger and dumping into the coolant pan. The pump is IP67 rated meaning it can be submerged in water up to 1 meter depth (though I would not do that for long), so I just had it sitting in the coolant to suck it up. I powered the pump using an external 12V battery. I had to use caution because coolant can conduct electricity, so serious care had to be used. Don’t try this at home! I had left off the cap to the coolant reservoir and coolant came out like a big fountain when I turned on the pump. There was definitely a blockage in the system. I found the plug in the heat exchanger and tested the intercooler just by itself. No surprise, there was plenty of flow going through the intercooler.