In our last story, we were assembling the parts for Ian’s long rod stroker EJ205.  Now that we had rods and a crankshaft from Eagle and Pistons from JE, it was time to go have the blocked prepped.  Ian had decided that he wanted to do a closed deck block.  After some research, he sent his case halves to Outfront Motorsports to have their Closed Deck V3 Service performed on his block. This process converts the EJ205’s open deck to a closed deck configuration via an insert that’s roughly .400″ thick along with having all the necessary machining done to ensure a perfect deck height.

Unlike the EJ25 that has buttressed cylinders.  The EJ205’s cylinders are completely free standing with nothing to tie them into the rest of the case.  With increased boost and side loads in a heavily modified engine, the cylinders can flex and shift causing head sealing issues and even failure of the cylinder walls.  Outfront Motorsports has a conversion to close the deck of the EJ205 and EJ257 that has proven to be durable and reliable.  In the past, some companies attempted to reinforce the deck by tapping in a CNC machined billet aluminum block guard. This caused distortion on the tops of the cylinders right where you really need for them to be round for good ring seal.  On some motors with block guards, you could see the wear pattern in the cylinders where the block guard was distorting them.  Sometimes the cylinders would crack right were the block guard was.  Sometimes the block guard would come loose and cause sealing issues.

To avoid these issues Outfront Motorsports has come out with a proprietary process to offer a closed deck block, which they call their V3 Service. Outfront Motorsports offers a  V4  Service as well, but Ian doesn’t plan on pushing the engine past the capabilities of what the V3 Service can handle. Part of the process is secret which we were not shown but we can show you some of the steps they do when machining Subaru blocks or case halves, the more accurate term!

We were not allowed to see the proprietary process of machining the block deck and the installation of the closed deck inserts.  Outfront Motorsports did answer our questions for our concerns about the process.  The block is precisely CNC machined for the insert and a stepped register is machined into the water jacket and cylinder so the insert is positively seated and cannot shift around.

The insert has a slight interference fit with the block and is pressed into place to sit solidly on the register on a fixtured hydraulic press.  The insert is installed with a Loctite anaerobic sealant.  The fit is tight enough to be stable but not enough to distort or stress the cylinder. This is part of the proprietary stuff that we don’t know about.  Once the inserts are in place, they stand proud of the block by about 0.010″ and need to be machined down to make the deck flat.  The picture above shows the inserts in place and ready to be decked flat. 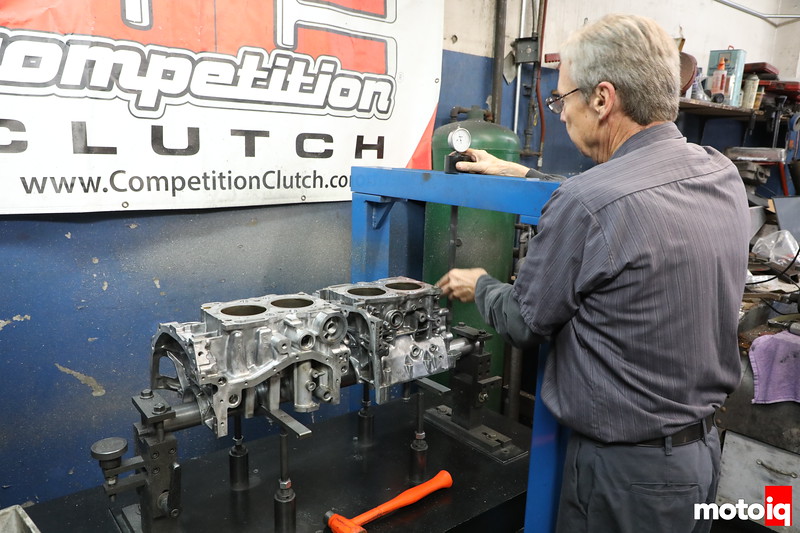