So DO NOT do what we did when our Project GD STI turned on a p0011 OBD DTC code.  What we figured was some sort of sensor issue ended up ruining our beloved Precision Ball Bearing factory upgrade turbo!  Project STI is actually my daughter, Christa’s car and she has been driving it to school every day for the past two years.  One day she told me that she was getting a check engine light and she had checked the code with her Cobb Access Port and it was a p0011 and what was that?

Looking it up, a p0011 is a variable cam timing error for the left cylinder bank. Knowing that the AVCS sprocket rarely gives trouble we checked the resistance of the cam sensor which was fine, then checked the harness for continuity and a good ground which was also fine.  We scratched our heads and erased the code to see if it would come back.

A few days later it came back and on the same drive, a p0021 code threw as well which is the code for the right cylinder bank. Then the turbo started to make more noise! Oh no! So it was time to do some research.  Apparently these are common codes for the STi and WRX. There was a TSB, or technical service bulletin, issued regarding the filter screens for the AVCS sprockets clogging up. It affects WRX and STi models made before 2006.  This can cause the p0011 and p0021 codes so it was time to check that!

Normally it is pretty easy to check the AVCS sprocket screens.  They are in the banjo bolts to the oil feed line for the AVCS sprockets. However, our car has a Greddy front mount intercooler so we had to remove the charge pipes.

Our car also has Injector Dynamics large fuel rails and the AN fittings for the fuel feed block socket access to the banjo bolts.

We used an open-end wrench and a crescent wrench to undo the banjo bolt like this.  This way we didn’t have to take the fitting off the fuel rail. 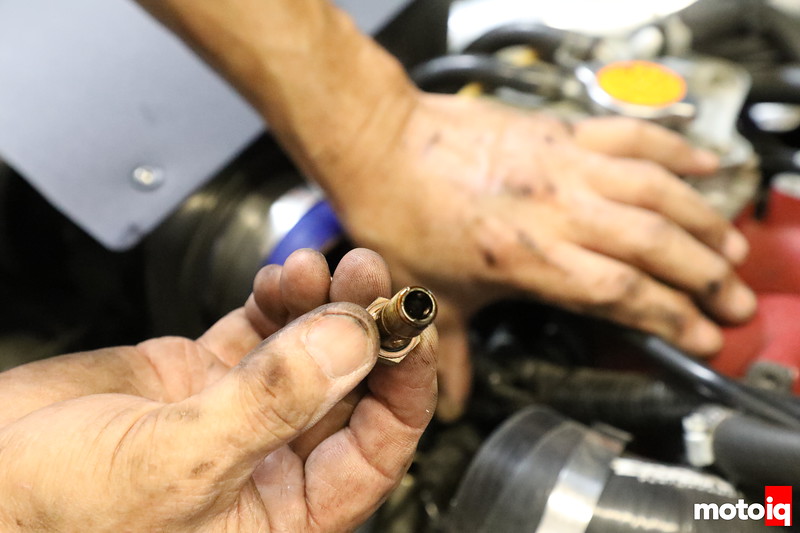 The TSB says to discard the screens found the banjo bolt.  On our car, the screen was already gone.  Someone must have performed the TSB on it at one time or another. Project Porsche 987.2 Cayman S: Getting the Suspension Together! Part 2