This week marked a sad day in MotoIQ and my personal history.  Today is the day that the new owner of the little 1996 B14 Sentra race car known in the Nissan Comunity for years as The Dog Car went to its new owner.  It is sad because this car has been on track and racing with me and my friends for almost 20 years.

The Dog Car started out as a basket case of a race car that I had bought for something like two thousand bucks, I forget from who.  I think Ron Johnson who used to run Nissan Motorsports told me about a deal. Someone was offloading their uncompetitive Nissan race ca that was built for I think World Challange and USTCC and driven by the late Lou Riba who was one of the local SCCA hotshoes at the time.  Well, Lou got Leukimima and sadly passed away before the car could really be finished or developed and the car quickly passed through several owners who pretty much hacked it up before I got it. The redeeming part of the deal was that the car came with a ton of spares and an extra shell which would end up being built into the Dog II.

When I got it, I really didn’t care if the car was fast.  I just wanted a crappy beater track car to play around with.  I got the car running and did some basic stuff like add a Koyo radiator and a big oil cooler with a JWT ECU so the car would not overheat and self destruct like SR20’s were known to do under racing conditions.  I think I drove the car in NASA HPDE events for a year or something, enjoying the car and realizing that it was pleasantly decently fast considering.

About this time I had Richie Watanabe of Technosquare go through the cage and fix some poor welds and add some gussets and a few tubes in the door bars and upper halo to reinforce it for safety.  Richie also made better seat mounts and installed a Sparco FIA seat and proper harnesses with solid mounts.  I had this done to make the car safe but at the same time, the car could now pass NASA tech for wheel to wheel racing!  Everything went downhill from there.

So I was at a NASA track day at Willow Springs when my friend Tom Paulie was trying to convince me to race in the first race of NASA’s SE-R Cup.  This was a spec class for Nissan Sentra SE-R’s.  Well, I didn’t have a license but I did have an SCCA National Licence and an IMSA license from the late ’80s and early 90s.  So Tom did some talking and the next thing I knew, I had a NASA provisional competition license!  Oh crap, I had to race now.

Here is my bad self right before practice! 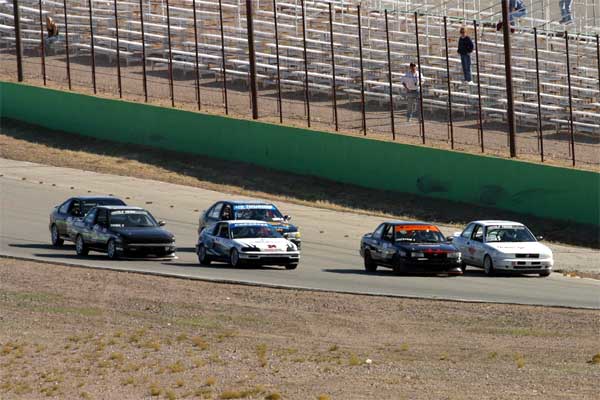 So I don’t think I qualified all that well but then green flag dropped, it was on.  We were in the same race group as NASA’s PS3 class I think so that’s why some Honda’s were in there.