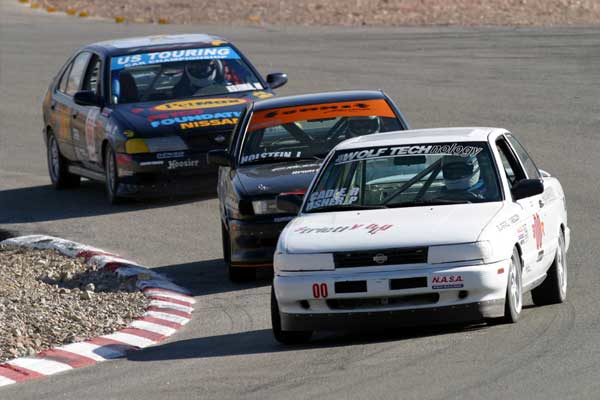 So I somehow worked my way up to fourth behind Tom Paulie, Rob Cadle, and Jared Holstein.

I don’t remember this but I must have somehow passed Tom and held the lead at one point.  Jared spun or broke and I think I ended up in third behind Rob and Tom much to my surprise.  Now my old competitive juices started to flow and all of a sudden I got the urge to make the old Dog Car more competitive.  Now I was going to head down the rabbit hole of things getting expensive.  Do you like the plastic garden edging air dam I made from Home Depot?

So for the next race at Buttonwillow, I had the cars Ground C0ntrol Advanced Design shocks rebuilt, revalved and changed the spring rates around.  I also added Progress sway bars and had all the stock bushings changed with Energy Suspension Urethane parts. I think I came in third here too.  The car was getting much better!  What do you think of my old school PJ’s looking driving suit?

The car was sponsored by a Dog Food company and part of my deal for getting the car super cheap was I had to run the same livery for a season.  Other racers started to call the car the Dog Car and the name stuck.

For the next race, I added a rear wing which was unheard of on an FWD car at the time.  I was ridiculed for this.  John Spangler of Hotshot headers gave me a header and a cold air intake at this time.  John also built me a decent exhaust. I also got one of Fastbrakes first Willwood big brake kits.  The car dynoed at a whopping 140 whp but it was better than the 117 that it had when I first got it.