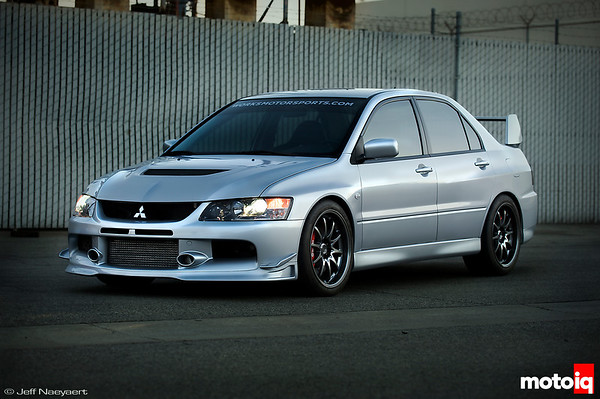 We have covered typical suspension build ups in the past with our EVO VIII but this time we have decided to try something special. This time we have decided to build the ultimate no holds barred suspension for the EVO CT9A chassis, money not being an object, the only caveat being that it had to remain streetable and not be so stiff that it needed a roll cage to function properly. We are attempting to build the ultimate suspension set up for Time Attack in the Limited or Street Modified Classes.

When attempting a bold endeavor it is best to consult with those who have been there before. Fortunately for us, the EVO is such a popular and flexible platform that there are many companies who specialize in getting them to stick like glue to the pavement. We called upon Robert Fuller, or Robi for short, for much needed advice. We have always wanted to work with Robi on some project. At the track Robi has always been a big help, instantly springing through the garage door, tools in hand whenever a loud crash or a burst of foul language was heard. Despite being a fierce competitor Robi has always been there to help out from simple advice to all out wrenching at the track, even when we were out to beat him.

This sprit has always earned our respect and we have wanted to pick his mind directly on a project, but we have never had one that matched his specialty, making EVO’s and Subaru’s corner like Velcro on Velcro through his suspension tuning company Robispec. That all changed when South Coast Mitsubishi made us an offer on a brand new EVO IV that we could not refuse and we found ourselves taking one home to keep. Within days we found ourselves calling Robi and finally initiating that project. Robi was an instrumental adviser for all aspects of our build. Although we mostly sourced our own parts for this build, Robispec stocks and recommends nearly all of the parts we used.

With deadlines depressingly close and an injured back aching, we had to enlist the help of some competent professionals to slap our EVO’s suspension together. As we have many times in the past, we called upon Howard and Ritchie Watanabe of Technosqaure to help us with our install in record time. Technosquare is a race prep shop located in Torrance and the Watanabe brothers have many years of experience in getting SCCA, NASA road race, pro rally and drift cars working fast. Technosquare really is the best damn garage in town and the bros are capable of lightning fast, high quality work. We thank them for accommodating us on such a short notice and for working late into the night to help us get this article out.

The basis of any suspension build up revolves around the dampers or shock absorbers. Good dampers can make or break a car’s handling and are often overlooked or maladjusted by the inexperienced. For our dampers we got our inspiration not from the streets of Tokyo, or any street for that matter, but from the paddocks of SCCA Speedworld Challenge and Grand Am Cup races. While walking pit row at these events, we noticed that many of the top cars had one thing in common, Moton dampers. Moton is a Dutch company but they have a North American operation that supports their products. Motons are very technically advanced dampers and we opted for their 3-way adjustable Motorsports units, cost being no object.