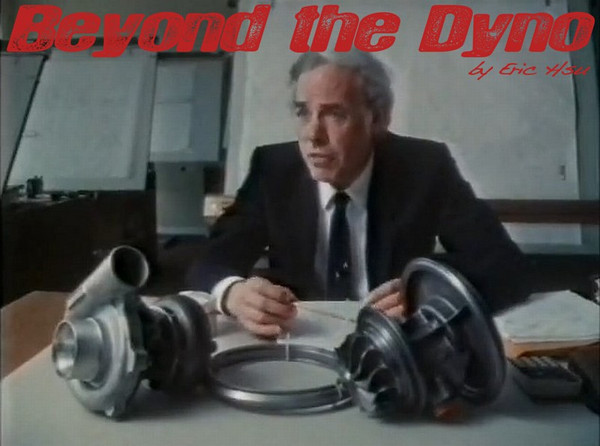 Mark sent me an email last week about a post over at Axis of Oversteer where they had these videos up. It turns out they also had a link to my original post on the Cosworth F1 GBA Turbocharged 1.5L V6 which is actually the main topic of the videos below. BTW, if you've never checked out Axis of Oversteer, check it out after watching these videos if you're a motorsports nut. The videos below were originally broadcast on July 31, 1986 in the UK as part of a science and technology series called “Equinox”. “Turbo: Once Around the Block” is a somewhat in depth look of the development, initial build process of the Cosworth GBA engine, and some of the issues Cosworth, Ford, and Motorola had with getting the engine up and running. It is more in depth than any video you'll see from Honda, Renault, or Ferrari. But then again, Ford probably had the most money in the 80's to assist in video production costs for television coverage.

These videos fall right into my recent interest in old school car, racing, racing movies, and motorsports tech videos. I've been hanging around Ken a bit too much I think. There's a certain amount of innocence present in most old videos. Cars and their components were much simpler. The designs were simpler. Everything was more raw. The world and society as a whole was more simple. Today you have to worry about everything because we know so much more about technology and science. The world is a much more complex place where you have to be PC because everybody is so damn sensitive. Companies have to appease tree huggers. Even cars are heavier and softer. Nothing is raw anymore. Anyhow enough complaining. Strap into the DeLorean and get ready to go back 25 years. Well actually for most of us street car guys, it's still more advanced than most of the stuff we do today from the mechanical aspect.

3:32 – Look at that Bosch Motronic ECU! It's the size of a VCR! I think I see two 8 bit EEPROMs on board. It may have been two  8 bit EEPROMs for additional memory capacity run in series or two 8 bit EEPROMs in parrallel for 16 bits of instruction.
4:16 – That's the late Keith Duckworth who was the mastermind behind Cosworth.
11:07 – That's an aluminum derivative of the Cosworth BD engine block being machined. I believe it is a special block specifically for this engine test since it has no water jackets in it.
13:08 – There's no turbo on the engine at this point in time. Instead they are using an industrial compressor to supply boost to the BD engine.
14:08 – This is when data logging really meant data logging. Notice they are doing this at 10,000rpm.
16:02 – At 11,000rpm the engine finally gives up. The dyno operators seem surprised?!? The engine was up there for quite a while. I was wondering when it was going to break. Engine dynos load engines like no chassis dyno can.
18:53 – Notice there are no water jackets open to the fire face of the head. This head uses crossflow cooling and will be significantly stiffer because of the lack of holes.
24:42 – Notice there are no water jackets open to the deck of the block either. This also allows the block to remain stiffer. Stiffness helps to keep the cylinder to head seal intact.
25:02 – Look at how perfect those piston skirts came out of the engine that was sitting at 9.5-11000rpm that whole time on the dyno. This is typical of Cosworth pistons. Try that with your shelf stock American made piston.
49:23 – Fuel and ignition trims via two knobs are way high tech.

8:03 – I don't think they have OSHA in the UK. There's 3 guys within a foot of an engine spinning at 10,000rpm.
20:32 – I love how they over simplify things with a simple quote.
26:36 – That's Ross Brawn (25 years ago) from Brawn GP (now Mercedes GP).
35:42 – Same deal on the Ford/Motorola ECU. There are two 8 bit EEPROMs.
38:51 – The Garrett turbo on this engine look like they are based on T3/T04Bs. No doubt there was some high tech stuff going on inside (see my original post on the GBA).
39:25 – Notice the “FORD EEC 1” lettering on the ECU. I'm not sure why, but I think by the mid 80's Ford was already at EEC IV on their production cars.
43:12 – The Honda VTEC V6 was equipped with twin ball bearing IHI RX-6 turbos even back in 1986. The Honda may have benefited from superior turbo technology at the time. You'll find IHI RX-6 turbos on WRC Subarus and older APEXi turbo systems for Skyline GT-Rs, Silvias, and EVOs too.

As it turned out, the Beatrice/Haas team wasn't very effective and the Cosworth GBA engine had very little success in 1986. In 1987, Ford decided that the Benetton team would have the GBA. With a 4.0 bar (absolute) boost limit on gelled Toluene fuel the GBA was supposedly reliable enough for 600 mile intervals. The Benetton B187 had a couple of podium finishes in 1987, but the FISA (now called the FIA) would limit 1.5L turbo engines to only 2.5 bar boost  and increase the normally aspirated displacement limit to 3.5L for 1988. This rule made it so engine suppliers would have rather supplied more competitive 3.5L V8s. That was the end of the turbos in F1…until 2013 that is.

BTW, if you like old race videos, check out the home page on Vimeo for user “GT4zone”. He's got quite a few other cool videos up.