Traditional chemicals, parts washers, and hot tanks can only do so much to clean dirty car parts.  When pride is taken in rebuilding anything from a carburetor to an entire engine or suspension, simply cleaning the surface of the metal is just not enough. Thankfully there is a process that is quickly increasing in popularity that restores surfaces to better than new condition: Vapor Blasting / Wet Blasting.

We recently took a tour around Mountune USA’s facility (located in Carson, California), and were introduced to the amazing process known as Vapor Blasting. Once we saw the end result of the process, we had to take a few parts from Project NSX to get blasted.

Mountune USA  is the US-branch of the British tuning company founded by David Mountain (Mountain-Tune) and made famous for their championship winning touring car and rally race engines.  The US division is made up of a lot of ex-Cosworth guys who know a thing or two about building engines.  While known for their work on Ford twin-cam engines, Mountune USA is a complete engine development facility with a machine shop, assembly room, and an in-house engine dyno.  They are the official engine builder of the Honda-powered F4 championship and their engine shop is full of Porsche engines, vintage car engines, and more.

WHAT IS VAPOR BLASTING?

Vapor blasting goes by many different names: Wet blasting, wet abrasive blasting, aqua blasting, slurry blasting, wet sandblasting, dustless blasting, and liquid honing. It is a surface refinishing process that effectively removes coatings, contaminants, corrosion and residues without damaging the original surface.  Because of this, vapor blasting is quickly becoming the number one choice for applications, like restorations, that require the highest quality surface finish.

Vapor blasting is a superior process with significant advantages over traditional dry sandblasting. By suspending fine abrasive media in water and detergents, the blasted surface is left with an attractive satin finish that is smooth and almost polished due to a peening-effect that doesn’t leave fingerprints like sandblasted parts do, while being more resistant to future staining and corrosion.

Dry blasting uses sheer impact force from high-pressure compressed air to propel abrasive media at a surface.  This process causes the media to shatter on impact into finer dust particles, distorts and embeds abrasive particles into the substrate, generates heat, and can cause dry sparks charged with static electricity. 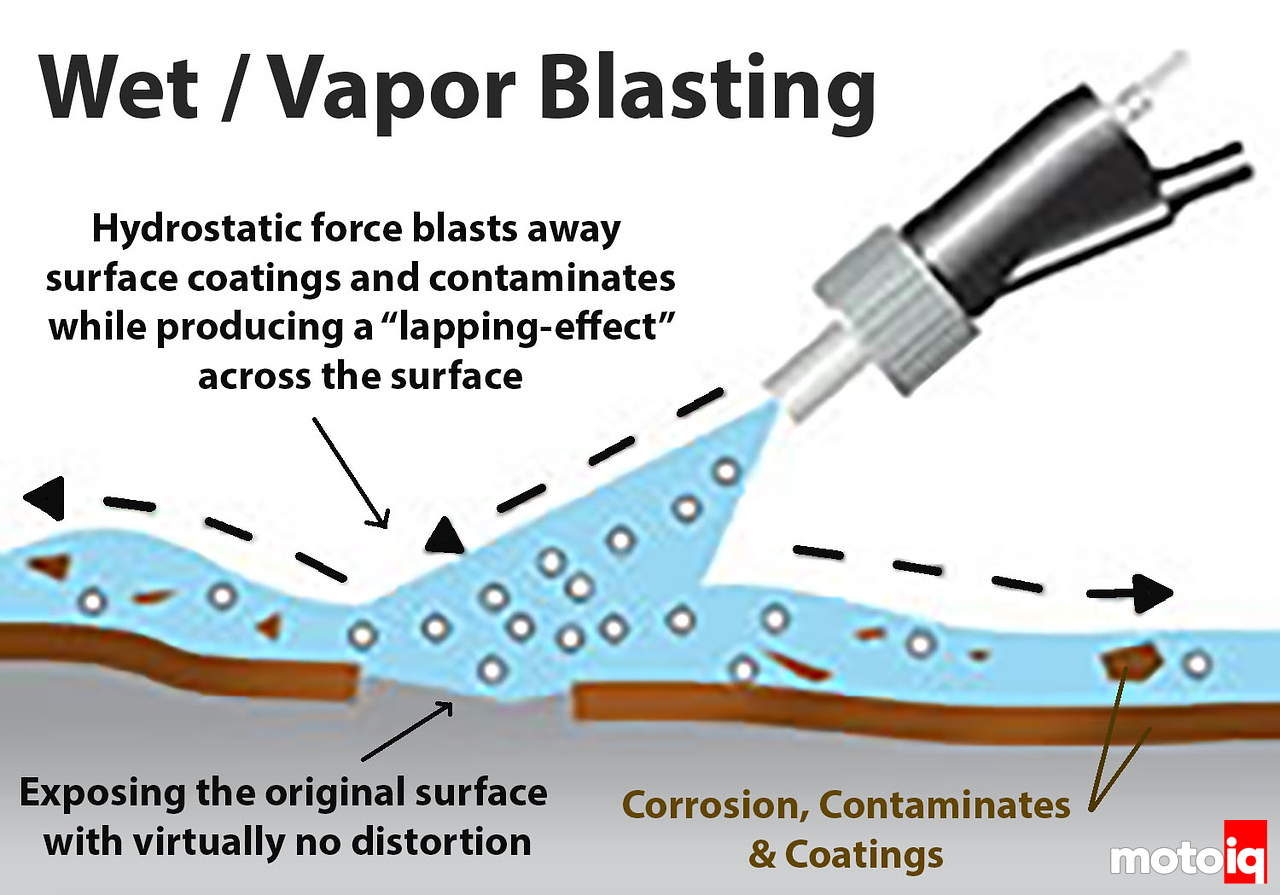 By comparison, in vapor blasting, the water/detergent solution softens the impact of the abrasive media and adds mass to the particle at impact.  This creates a hydrostatic force that blasts away surface coatings and imperfections, scrubbing the surface clean by the flow of water borne abrasives, without embedding the media into the substrate.  This process produces a lapping effect across the surface; knocking down the high points of the surface to improve the uniformity and smoothness of the surface.  This is part of what gives vapor blasted components the smooth, polished, satin finish.  Softening the impact also prevents the particles from shattering and cleans the surface without damaging or changing the surface itself.

Not only is this process cleaner and dust-free, but more importantly, vapor blasting can operate at lower pressures to remove coatings, contaminants, and corrosion without damaging the underlying substrate from erosion or distortion.  The water also reduces friction and localized heat that can warp metal surfaces in normal dry blasting.  This makes vapor blasting the preferred method for restoring antiques, soft surfaces such as aluminum, copper, brass, bronze and even wood.

Overall, vapor blasting is a far less aggressive (but equally effective) form of blasting that restores the finish to better than new conditions. It cleans the surface like no other process could, while creating a finish that gives the look and feel of a high quality restoration. Not all Michelin Cup 2 Tires Are Created The Same