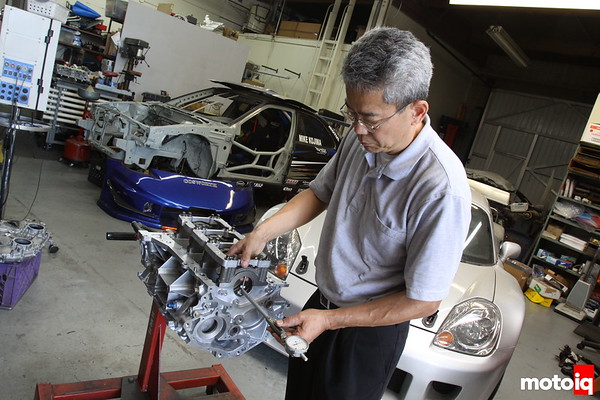 Cheston Chiu’s turbo Nissan 350Z is well known in the Nissan Z community as being a fast well rounded machine.  Cheston’s car is more than just good looking, its been the runner up in Sport Compact Car’s Ultimate Street Car Challenge placing just 10 skinny points out of first place.

We were lucky enough to be hanging around Technosquare when they were in the process of freshening Cheston’s engine after many street and track miles and can bring some of what goes into his motor to our readers.

It is interesting to know just how stock Chestons motor actually is with most of his parts simply contributing to reliably of his VQ35DE under boost with demanding track conditions.  Unlike hot street cars or even cars that see strip use, a track day car must run under peak boost for up to 30 minutes at a time, something much more demanding on an engine that what a street car will ever see.

Cheston’s motor puts out a little over 500 whp @ 18 psi of boost on Technosquare’s conservative chassis dyno using a Power Enterprise twin turbo kit.  This equates to around 550 whp on your typical dynojet.  The engine isn’t built for big power amounts but to make a broad powerband with long term reliability.  So let’s take a look inside and see what makes it tick.