What are the kinds of progress that have made turbo charging so usable this decade or so? 'Back then', car reviews will tell you how severe the turbo-lag is (and the subsequent surge in power). Nowadays, many turbo cars seem to not suffer from lag to the extent that reviewers compare the power delivery to that of a N/A engine.  Is it better electronic control of… stuff? Materials science? Ground-breaking inventions and improvements?

Outdated technology has its place.  I still carry an old LG flip phone with no camera but it makes calls fine (that is the point of a phone anyways…) and texts (T9 word baby!) and the battery lasts longer than the one in a MILF’s “personal pleasure toy.” But I can’t deny technology all the time, especially when I’m seeking more power under the hood.  Innovations in technology have significantly modified the car industry in the past decade, especially when it comes to turbocharging. FYI, I’m always happy to test the newest shiny things on the market so feel free to send them my way courtesy of MIQ!

In 1962, GM released two turbocharged cars- the Oldsmobile Jetfire and the Corvair Monza Spyder. The high 10.25:1 compression ratio V8 engine paired with a Garrett turbo was quick to self-destruct when it didn't run the suggested “turbo rocket fuel,” a mixture of distilled water, methanol, and a corrosion inhibitor.  The Jetfire's production was short lived at 2 years and selling just under 10,000 units.

Nowadays, the turbocharger has become the muscle behind both high horsepower sport compact cars and even family grocery getters but this didn’t happen overnight.  It’s been more than five decades since a turbo was introduced on the first American mass produced vehicle (1962 Oldsmobile Jetfire).  There are lots of reasons behind this shift in the last decade to turbochargers from improvements in turbo design/materials and increased reliability to changes in engine design and better tuning options to increasing fuel efficiency and emissions requirements with smaller engines.  As is the case with most motorsports, it’s all about weight (better aerodynamics) and speed (efficiencies) here.  Lightweight compressor and turbine wheels, ball bearing center sections, forged pieces of super strong alloys, variable nozzle turbines, and CAD and fluid dynamics analysis are some of the reasons we’re boosting more frequently now than ever before.

Electronic fuel injection became the norm in the 1980’s and with that marked a new era of engines more adaptable to different tuning programs.  The range of fuel and engine management options today has definitely influenced the growing group of tuners capable of modifying their cars with turbos. Aftermarket turbo options range from kits that drop right in to custom solutions, including the ability to mix and match wheel sizes and integrate engine sensors, blow-off valves, or better flowing (than in the past) internal wastegates with different spring/canister combinations.  Some turbos offer an integrated boost solenoid and others provide the ability to water cool the center sections.  All of these advancements came about from consumer demand and continuous improvement. It’s a turbo smorgasbord- eat up.

Material choice can greatly influence a turbo’s efficiency with lighter, stronger alloys today reducing weight and air resistance while maintaining strength.  Titanium and aluminum  alloys are often employed to make the turbine/compressor wheels.  BorgWarner’s EFR (Engineered For Racing) turbo features a Gamma-Ti turbine wheel and shaft.  Gamma-Ti is more difficult to cast but 50% lighter than its Inconel counterpart which provides better low end response and higher boost at low rpm and can provide higher overall wheel speeds.  Gamma-Ti strength actually improves with more heat- it’s weakest at room temperature but during boost and driving conditions, it becomes more ductile and durable.  EFR housings are also cast from stainless steel rather than the standard cast iron. This means they are lighter but also way more resistant to cracking under high temperatures. All of these advances in materials lead to greater performance and reliability.

In the past, most compressor wheels were cast aluminum. That's fine when you need cheap and mass produced but it can't offer the same strength or stability as billet aluminum.  Cast aluminum products have more defects that promote stress risers, which can lead to wheel failure. To combat this weakness, the blades had to be made thicker and the center hub was beefed up.  A step up is a billet wheel.  Billet wheels are CNC machined from aluminum stock.  They have a more homogenous grain and consistent production.

5 axis CNC machining allows the cutting tool to cut from numerous angles rather than just from the side like flank milling. Significant improvements in aerodynamics and flow can be realized by this process and the Garrett GTX wheel is capable of higher pressure ratios and greater flows. The forgings are of a superior strength, stress tested, and reliable.

Then there’s Baller Status like the Garrett GTX wheel.  The GTX wheel is a 5 axis CNC machined wheel and probably most significantly, the grain structure of a Garrett GTX wheel follows the shape of the wheel itself increasing the wheel’s strength.  The GTX turbo is designed to withstand the pressures a crazy high performance turbo engine is exposed to but it costs more and takes more time to produce. 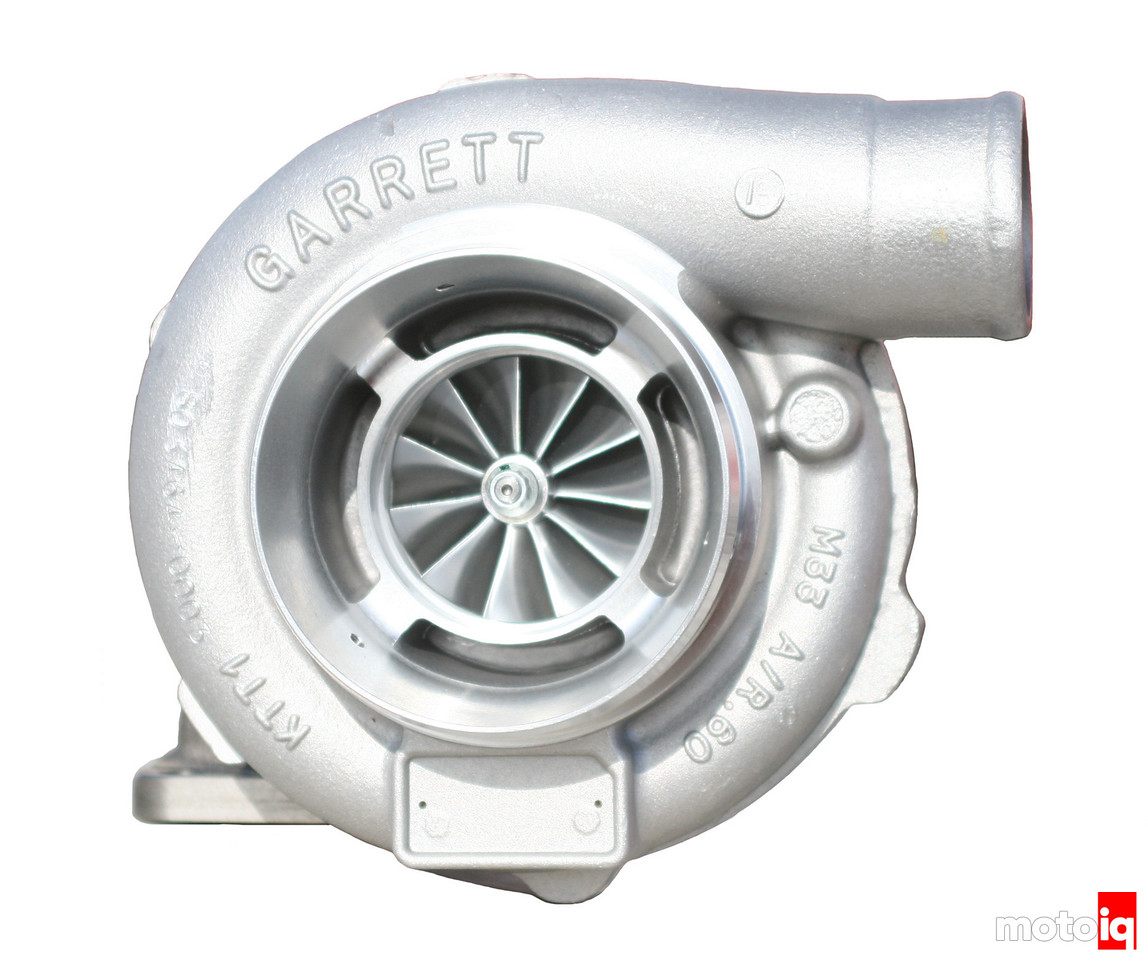