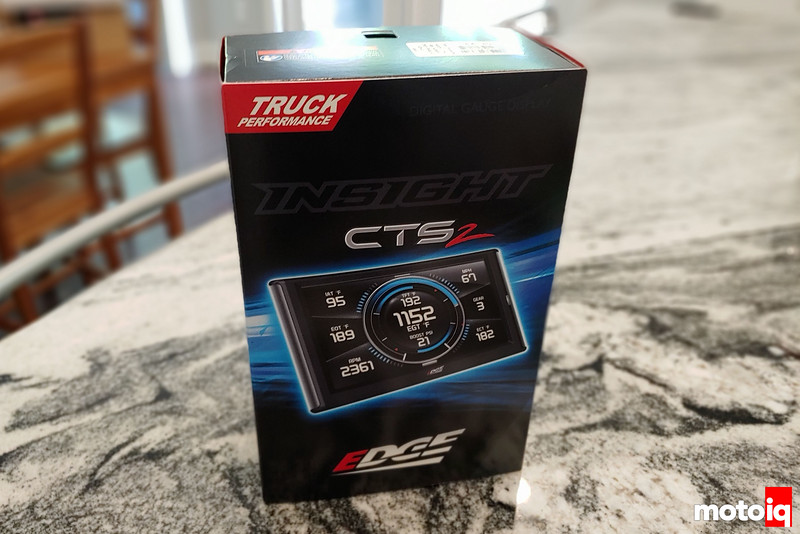 When you’re towing, keeping tabs on what’s going on is pretty important. Many of the older diesel trucks (or vans, in my case!) did not have great gauge packages from the factory. My van had a spaghetti mess of aftermarket 52mm gauges and the EGT probe had started to act flaky. Instead of replacing yet another gauge, I decided to look for a more modern option.

Edge has been making performance aftermarket electronics since 1999 and is well known in diesel circles for their programmers. A few years ago, Edge Products came out with their Insight series of gauges, and the CTS2 is the larger of the options. The CTS2 is a touch-screen multi-functional gauge that reads data off the OBD2 bus, but also offers expandability with an array of additional sensors and other modules.

Edge even makes an Evolution version of the CTS2 which comes with programmer features to tune your vehicle. Unfortunately for me, as is usually the case, the Ford van powerstroke ECM is slightly different than similar year trucks, and Edge claimed that the Evolution would not program it. Cue sad trombone.

That being said, we could read most of the important data from the OBD2 bus, and we would add a few sensors for things that weren’t available from Ford (or that Edge Products didn’t decode).

The CTS2 stand-alone unit is simple enough by itself. It comes with the display, a windshield mount, a cable to plug into the OBD2 port, a USB cable to connect to a computer (for updating firmware and making some programming changes), some zip ties, and documentation.

Oh, and of course it comes with a sticker.

I dutifully followed the instructions.

I also have a thing about removing the plastic that comes on new electronics. I like to savor the moment. It really is a moment for me. Hey, we all have our… things.

And, in fact, it is. You can also see a bit of the spaghetti mess that is the van wiring. In addition to the aftermarket gauges, the van also has an aftermarket keyless entry system, but the ’98 never had power locks. It also has added power windows, which the ’98 didn’t have either. It’s… precarious.

This is the extent of the wiring you’ll need to do to get the basic CTS2 up and running. You plug it into the OBD2 port. That’s it. Really. It will power on when you turn on the vehicle, and it will power off a few moments after you turn off the vehicle. Easiest wiring project ever! SlipAngle Podcast /// The Bens from Gears and Gasoline