So close but yet so far, that was the end of the Evasive Motorsports 2019 Pikes Peak effort. After a very successful series of practice runs, the teams Toyota 86 was consistently second in times in the three different practice sectors of the course. The car was running flawlessly and the suspension, engine management, and traction control systems were getting pretty dialed in. As the big day approached, the team was excited and confident that good results were a high probability.  However, in racing and warfare, the results are not always predictable no matter how good the preparation is. 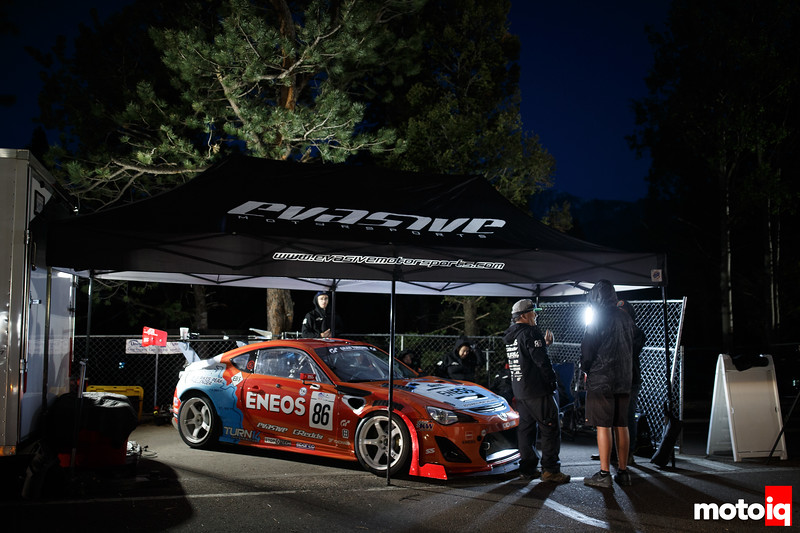 Thanks to our friends at Polyphony Digital, a title sponsor of the event, we had the first pit space to the start line.  Like we were explaining before, the distance between your pit and the starting line is critical for tire temperature and pressure management. Since you have to go flat out from the start, if you need to spend time warming up your tires and brakes you just lost. In the cold air with ice-cold pavement even with tire heaters, it is hard to leave the line with the tires at a good temperature and at the right tire pressure. 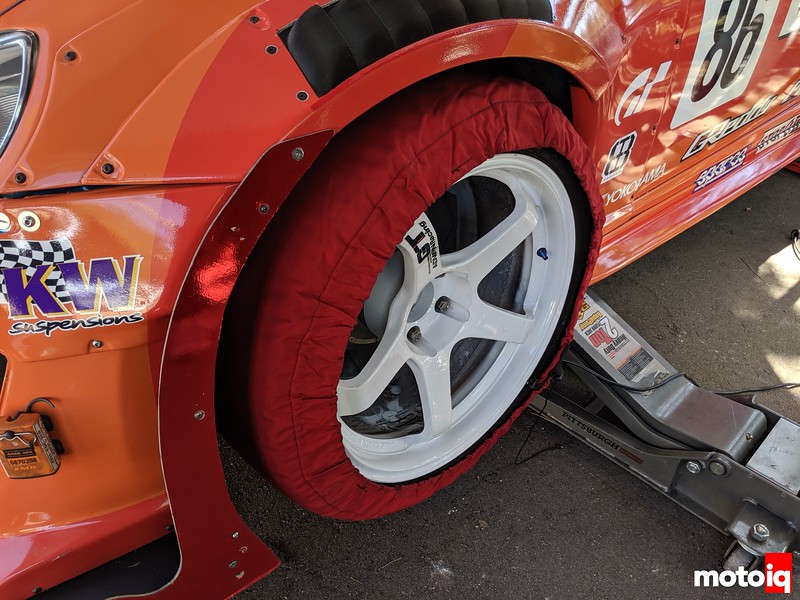 With the cold air temperatures, we had to start heating the tires more than an hour ahead of time, starting with the whole assemblies covered in blankets in the trailer. After the temperatures are close the tires and heaters are moved out and installed on the car with the temps and pressures being carefully monitored.

Getting the temps and pressures is so critical, Kelvin and I have to really stay on top of it especially in the final minutes up to start time. We run nitrogen in the tires because it is twice as stable as regular air pressure wise. The art of selecting the right start tire conditions is pretty much a crapshoot.  It is cold, the tires are getting cold as the car rolls to the start, as it gets cold the pressure drops, as the car leaves the line, the temperatures will climb for a few minutes, maybe.  As it gets colder and colder up the mountain, the tires may get colder and loose grip even though they are being beat on.  As the tires cool, the elevation rises and the outside pressure drops.  So as the tires lose pressure due to cooling the thinner air as the car climbs also causes the pressure inside the tires to rise. Guessing what is going to happen to the tires on their way up the mountain is a crapshoot and there are no hard and fast rules.  We had done air temp and road temp studies going up the mountain from our support vehicles and even took a tire and checked the pressures along the way to see what would happen.  We also looked at our practice notes to see how the tires actually behaved in each segment of the course.  Of course, this was different in each section but all the data could be condensed and a good guess for the initial tire temps and pressures be arrived at.

Kelvin and I had decided to leave the pits at 190 degrees and 17 front and 19 rear psi of pressure.  We figured waiting even in the short line would drop the temps to around 150 degrees by the time the car was away.  We sort of messed up and the car left the line almost as soon as we took the tire warmers off and got to the staging area. This caused the temps to be a little too high and Dai reported that the tires were initially a little greasy and not as fast as they could have been. Oh well, a little cloud cover or wind and the story might have been different!