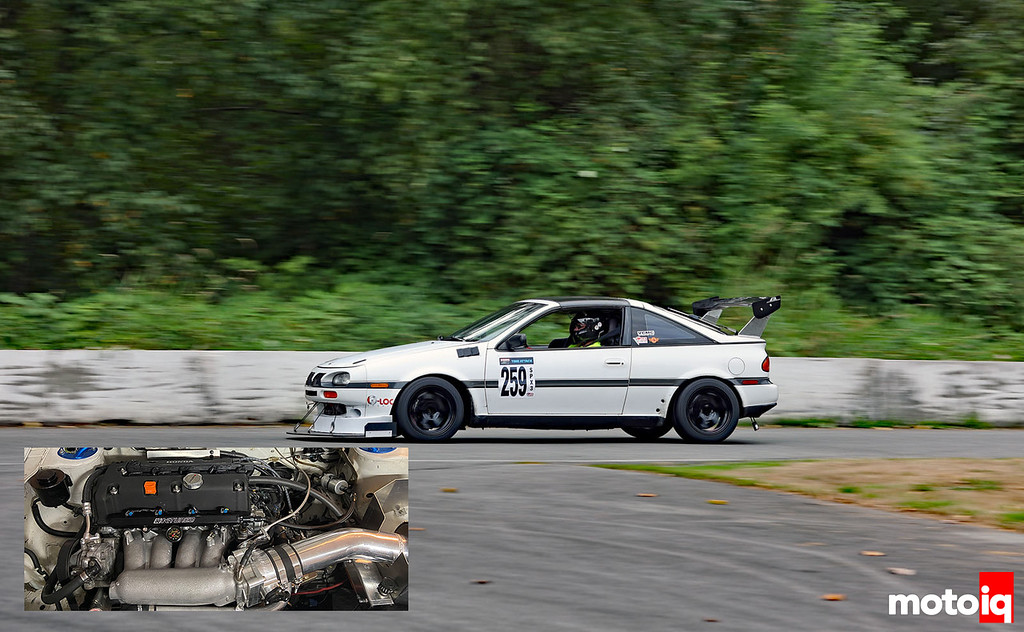 2020 was not a good year for the NX GTi-R. 2021 looks like a fantastic year. While the aero work completed in the early spring of 2020 was looking good and track use demonstrated that it was effective, the pandemic meant that the Knox Mountain Hill Climb was canceled for the first time in about 60 years. Local time attack events were canceled. The Canada/USA border was closed so Canadians were not able to attend Global Time Attack at the amazing Ridge Motorsport Park in Shelton, Washington. And a dyno run demonstrated a significant loss of power with the 54c SR20DET. A smart man would have pulled the engine right then, but I chose not to. Instead, I assumed that the engine wouldn’t be hurt much more when only running a few events during the bizarre summer schedule that 2020 brought about. Then I started gathering parts for a winter project in which a VE head – which I had owned for several years – would be installed on the GTi-R block.  That all changed in early January 2021 when, upon tearing down the engine to begin the VE swap – the block proved badly damaged. It could have been sleeved. A DE block could have been sourced. But this was just devastating news. It wouldn’t be the NX GTi-R with a VE head and a DE block! I chose not to sleeve it, but to go in a completely different direction.

I was at AES Auto when I got the news. Paulo and I sauntered down to the banks of the Fraser River while we pondered this revelation and considered options. I’ve done this walk a few times with Paulo and, in the past, with his pug Taz. It is Paulo’s refresh and refocus walk. The walk to get energized. This walk, however, was for me and to update me on the findings. You need to know, I have owned a ton of Nissans – B13, B14, Versa, & Altima. I’ve owned several Mazdas. I’ve owned domestic vehicles. But I have never owned a Honda automobile. Paulo knew that this was the decision at hand; he knew that this damaged SR20 just might be the tipping point for me. It didn’t take long before a decision was made. Paulo has long wanted to drop a K engine into the NX’s engine bay and now he had the green light to make it happen. On my way home I called my buddy James Houghton and asked his opinion – the enthusiasm over the phone for the swap was incredible. Please note, Nissan/Datsun aficionados, that this is not a KA24 swap. Some jumped to that conclusion in an earlier social media post but that is quite wrong. This was a complete platform jump that you will either consider to be awesome … or sacrilegious! It’s possible that you may not be able to make up your mind. Regardless, meet the NX K24. 2021 looks like a good year for the NX K24! The Nissan 54C SR20DET is out and the Honda K24 is in.