Our buddy Devin has been busy reinventing his time attack S2000 in his garage. Aside from changing the color scheme on the car from the last time we saw it, there are big changes in the engine, cooling, and aero departments. Devin is always learning and looking to go faster and our buddies at Professional Awesome had a hand in a few of the changes.

Very little under the hood is the same. The first big change is the engine; out went the 2.0L F20c being replaced by a larger displacement 2.4L K24A2. The goal of swapping to the larger displacement engine is more torque, power, a fatter torque curve, and better response. Inline Pro handled the engine building duties. The K24 is built with Wiseco 86.5mm pistons and Boostline connecting rods in the lower half. The breathing part of the engine consists of Kelford cams paired with Kelford springs and retainers. Holding the halves together are Inline Pro M head studs with an Inline Pro head gasket squished in between. The new engine package is better.

The turbo setup and heat exchanger layouts are improved and simplified from the previous iteration. The old turbo setup had a sidewinder manifold setup which hung the turbo out in front of the engine. The new setup is a more compact custom equal length manifold holding a Garrett GTX3582R Gen2 with a 0.83 A/R v-band turbine housing. At a tame 7psi controlled by a Turbosmart 45mm wastegate, the setup made 400whp and 371 lb-ft of torque. The turbo is good for another 300whp, so we’ll see how brave Devin gets in turning up the boost later after some more shake-down running. The new turbo setup is better.

The heat exchanger stack-up has been changed from a V-mount to all the air going in the same direction. Previously, the radiator was the lower half of the V with that airflow going under the car. The intercooler and oil cooler airflow vented out the hood. Now the heat exchangers are stacked with the intercooler first in line followed by the radiator and then the oil cooler. All the airflow goes through the stack and out the hood. I’m no aero expert, but eliminating the airflow going underneath the car should increase downforce. The new heat exchanger layout is better.

The F20c intake manifold bolts up to the K24. A Turbosmart blow-off valve does its thing and a few Radium goodies are on the car like this coolant tank. 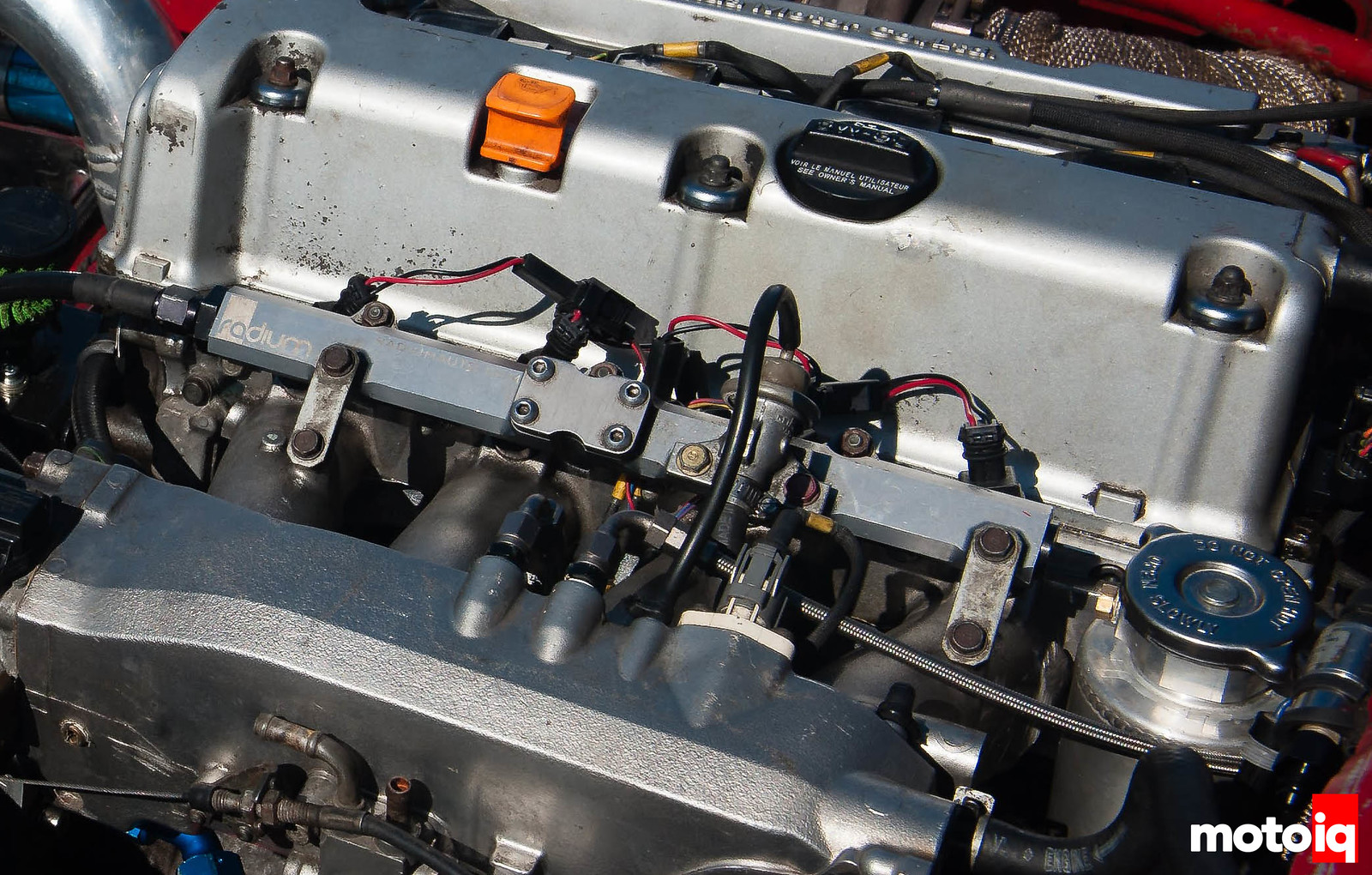 A Radium fuel rail holds Evolved Injection 1200cc injectors. Fuel starts off by going through a Walbro 255 fuel pump in the tank which feeds a Radium surge tank. From there, a AEM 340 pump sends fuel to the fuel rail. Fuel and spark are controlled by an AEM Infinity. The ignition parts are all OEM Honda S2000 goods.

The front splitter mounting has been cleaned up. The central air opening is the only feature to break up the smooth front bumper surface. Gone are fake vent features of the stock bumper which just increase drag. The hood vents got shifted more forward to better align with the heat exchangers. I want to say the exterior air pressure closer to the front of the hood is lower than further back also which makes for better air extraction out of the heat exchangers. The new front aero details are better.