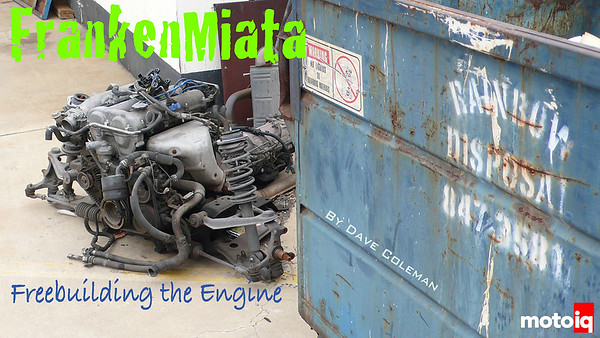 There is a moment of magic at the end of every engine build. It's that mysterious and suspenseful instant when a cold lump of metal comes to life for the first time. One second its just a pile of all the sharp, oily bits you’ve been lacerating yourself with for weeks on end, and the next second, if you’re lucky, it’s vibrating, belching smoke, perhaps even purring. Suddenly it generates its own heat, moves under its own power; it can take you places, power out corners, do burnounts, drive to Philadelphia; it's instant mechanical freedom.

If the elaborate mechanical and financial ballet of buying new pistons, rings, bearings and gasket sets; paying for machine work, taking blocks here and heads there, observing torque specs and generally doing things right is the internal combustion equivalent of giving birth, then building an engine entirely out the broken parts others have thrown away; digging through piles of old bearings to find the least worn; looking for the used gaskets that still have a little squish left in them, and using sandpaper where others would use a machine shop is surely the mechanical analogue of reanimating the dead. If the first lap around the block in your new engine brings a tear to your eye, then imagine the giddy, uncontrollable, Frankensteinian joy of the first dyno pull with the unholy creation you resurrected from the grave.

The engine used in this project was freebuilt from no less than four junk engines. Freebuilding is like rebuilding, but without all the stuff that costs money. Ignore all your instincts to think long term, and focus only on what is absolutely necessary to make the engine perform the task at hand — surviving 14 hours of abuse before exploding. Labor cost, it should be noted, is not considered in LeMons accounting, a fact that can lead to countless lost weekends and the absolute destruction of any social life. You have been warned.

The first step of any freebuild is figuring out why the donor engine was free. If the engine you're starting from wasn't free, you're doing it wrong.  The previous owner's cover story is a start, but should never be considered definitive. If they really knew that much, you wouldn't have this free engine in the first place.

Our first engine was a dead powerplant from a rare automatic-transmission equipped Miata. The automatics had an even lower performance version of the B6 engine, offering only 9.0:1 compression vs. the manual car’s 9.5:1, and using camshafts with 1 mm less valve lift. Those low-compression pistons are perfect for turbocharging. The low-lift cams, though, have a date with the scrap metal bin.

Our first engine's previous owner was Mark DiBella, who had never seen the engine running properly (he bought the car for the body). The owner before him, the story goes, was a half-assed ex-mechanic who “fixed” the engine only months before it started running on 3 cylinders. Doesn't sound good…

Before disassembly, a leakdown test was performed and cylinder #4 was found to have 100% leakdown. After teardown, the culprit was found to be exhaust valves that had large notches burned out of them.

We checked the block using the highly scientific look-at-it-and-poke-it-with-your-finger technique, confirming that the bores were in surprisingly good shape. When looking at a bore, shine a light on the cylinder walls and make sure the original crosshatched hone marks are still visible everywhere. Bores can wear unevenly and this will be revealed by smooth spots with no crosshatching. Also, make sure there are few, if any, vertical scratches in the walls. These scratches can happen when debris gets caught between the piston and bore, or when a cold engine is driven too aggressively, heating and expanding the piston before the bore has had a chance to expand a corresponding amount. Once the gouges are there, they provide a leak path past the rings, lowering effective compression.

When you remove the oil pan, check it for debris. Chunks of metal, blobs of silicone, lost pocket change. Any of this stuff is bad news. Also check the screen on the oil pump pickup. Our pickup had several little metal grenades, some blobs of silicone goo, and even one long, curly steel shaving stuck in it. This was a warning of things to come… (If they aren’t numbered already, be sure to mark the main and rod bearing caps as you take them off so they go back in the same position. Swapping caps can result in less-than-round bearings.)

You can learn a lot about a bearing just by looking at it. If there are gouges, that’s obviously bad. Most bearings are made of multiple thin layers and worn spots will show up almost like tree rings as the various substrates are exposed. Because of the way the bearings are loaded when the engine is running, Its normal to see wear on the top and bottom of the rod bearings, but not the sides, and only on the bottom of the main bearings.

Making matters worse, our crankshaft, a notorious small-nose crank, had a damaged nose with an enlarged keyway that would at best screw up cam timing and at worst cause the nose of the crank to snap off halfway through our race.

So, to review, our engine needed only manual transmission camshafts, two exhaust valves that weren't burned, a full set of un-gouged bearings, and a decent crankshaft. Other than that it was great. Money and a machine shop could have fixed everything that was wrong with our engine, but that costs money. Instead, we rummaged for better bits.