Perfectly flat mating surfaces are critical to head gasket longevity on any engine. Simply cleaning all the old gasket material off might have been enough to ensure a good gasket surface, but we did more. Measuring the flatness of the head gasket surface is easy with a set of feeler gauges and a precision ground straigtedge. We didn’t have our straightedge handy, but we did have the hospitality of MD Automotive, and he has a mill.

Now, milling a head, it should be pointed out, is normally done with a relatively specialized monster-sized flycutter that can cut the whole surface in one pass. The best we could do was a 3-inch wide flycutter that took three passes to clean up the head.

Turns out there’s a good reason for the single-pass method. The edge of each pass leaves a small ridge that could cause a leak path for combustion gasses or coolant or whatever substance that part of the head surface is trying to seal. To make absolutely sure the head was flat, we wrapped a known-flat steel bar in 600-grit sandpaper, and took turns polishing it until the flycut marks were gone.

There is very little chance the deck of the cast-iron block would be warped, so we didn’t flycut it, but we did apply the same sanding technique, giving both sides of the head gasket surface perfectly smooth surfaces to seal against.

Next up for the head was the valve job. Now, a proper valve job involves cutting a new surface into the valve seats, and grinding a matching surface on the valves. That generally costs money, though, so we did the $5 alternative.

Remember 10th grade? Odds are pretty good you were supposed to read The Grapes of Wrath that year. If you read the Cliff’s Notes, you probably got some plot synopsis about the Joad’s plight, the desperate living conditions of migrant farm workers in 1930s California, and some kind of hullabaloo about the formation of labor unions. If you read the actual book, though, you would have learned how to replace a rod bearing with a leather belt, how to quiet a dying engine by pouring sawdust in the oil pan, and perhaps most important of all, a relatively detailed description of how to lap valve seats. And you thought nothing you learned in high-school would be useful in the real world…

Lapping the valves involves trapping an abrasive liquidy goo (valve lapping compound) between the valve seat and the valves, spinning the valves, and letting the abrasives do their thing, machining the valve seat and valve face into matching profiles. Valve lapping compound can be found at any worthwile auto parts store for about $5. Tom Joad used a suction cup on a stick, sucking the cup to the valve face and spinning the stick between his palms like a doomed camper spins one stick against another in a futile attempt to make fire. Tom Joad didn’t have an electric screwdriver. 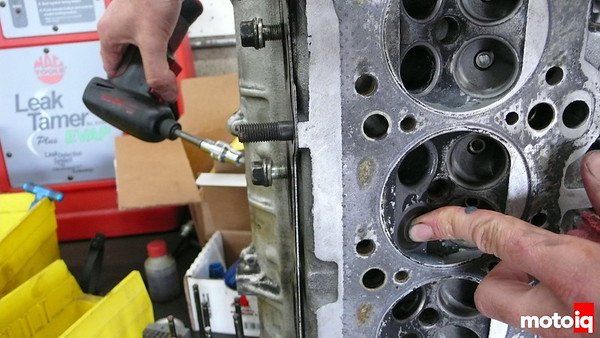 Here’s what you do: Grab the valve stem just above the tulip. Dip the stem end in oil, then dip the edge of the valve head in the valve lapping compound, spinning the valve gently to get compound all around the valve seat. Now slide the valve into the valve guide, making sure no compound drips anywhere it doesn’t belong.

When spinning the valve, apply gentle pressure to the head of the valve with your finger. As the valve spins, the grit will slowly work its way out from between the valve and the seat. You’ll hear and feel a difference as the grit disappears. You can suck the compound back in by periodically lifting the valve off the seat a few millimeters and letting surface tension suck the compound back in. You can do this every few seconds, and don’t even have to stop the drill while you do it..

You’re done when you can see a consistent, freshly-sanded surface making a full circle around the valve seat and a matching surface on the periphery of the valve. It took about 5 minutes per valve to get this surface on our engine.

Ensuring perfect ring seal means having a machine shop bore the block with a deckplate installed and torqued down, duplicating the subtle bore distortion caused by the head bolts. Then, with new pistons in hand, they hone the bore until exactly the the right piston-to-wall clearance is achieved. Then, a different hone is used to plateau hone the bore, knocking off the high points left by the first hone, and ensuring a fast and thorough break-in period.

We grabbed a ball hone, a drill, and a can of WD40. Our machine work was done in under 2 minutes. 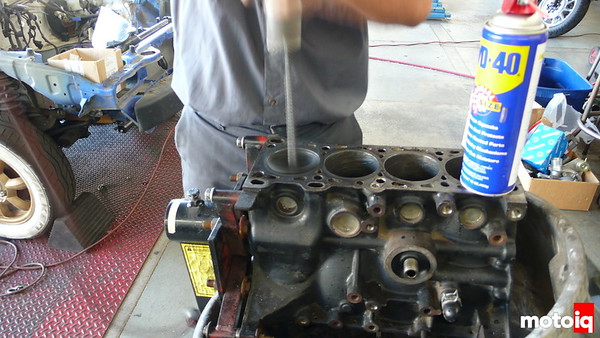