Grave Robbing, Round 1
Our first round of asking around revealed a friend of a friend in San Diego who was eager to get rid of a Miata engine that had spun a rod bearing. Since the engine came from a car with a manual transmission, which had the camshafts we wanted, we gladly took it off his hands for $0.

This engine donated its higher-lift camshafts and three non-burned exhaust valves. Curiously, this engine also had two burned exhaust valves. The rods, pistons, and of course, rod bearings were missing, but the main bearings were also severely gouged and the crankshaft was irreparably damaged from rainwater falling through an open spark plug hole onto the crank. Now all we needed was a crank and bearings. 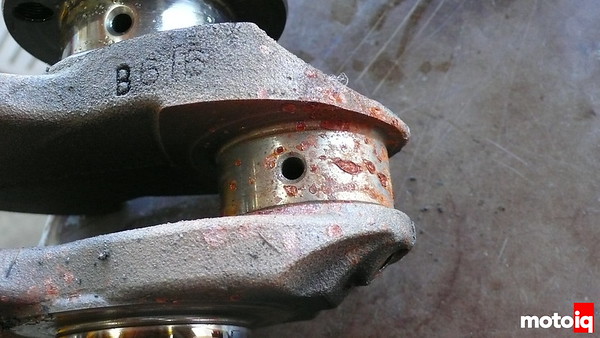 Grave Robbing, Round 2
Asking around some more, Tim Buck of Mazdaspeed Motorsports found a dead engine of unknown background sitting at AWR Racing, also, coincidentally, in San Diego. Needing only a decent crank and salvageable bearings at this point, we went straight to the bottom end. The results were promising at first, as we found a more robust, large-nose crank, but more digging revealed not only gouged bearings, but severely grooved crank journals as well. In the end, we got nothing but a bigger pile of junk.

Grave Robbing, Round 3
One more round of begging revealed a short block that had been sitting under a bird cage in a friend’s Yorba Linda garage for at least 10 years. It was an early, small-nose engine, but it was supposedly only a few years old when it was removed for a Monster Miata V8 conversion. If it was removed before its first timing belt service, there would have been no chance for a ham-fisted mechanic to bung up the crank.

By this time we were well versed in Miata tear-downs, and in a late-night blur of air tools and oil splatter, we had the crankshaft laid bare in about 7 miuntes. The verdict: good enough. The nose was perfect, the bearing journals looked fine, and the bearings themselves showed wear, but no gouges. We finally had all the parts we needed.