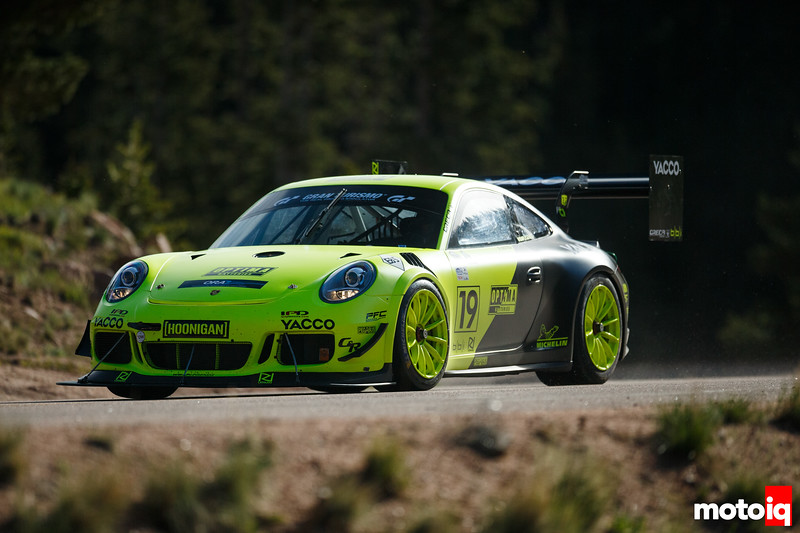 If you are a MotoIQ fan you probably have read about our adventures at Pikes Peak with the Evasive Motorsports/Eneos Oil Toyota 86.  So what better car to feature than the only car that probably would have beat us in Time Attack class if we didn’t break, Lucy the Porsche 991 turbo, named after the Beatles Song and built by BBi Autosport in Huntington Beach California.  Even though  Lucy the BBi car had the trappings of a factory works effort, it was really a shop car built in house by BBi in just a few weeks! In fact, the car was still being assembled in hotel parking lots on the way to Pikes Peak.  Since BBi is local to us and we are working with them on our GT3RS project car, we were lucky enough to witness the 22 day flog to get Lucy running before the event and to actually compete against her. Lucy started life kinda like a project we would want to do. Lucy was a 991 GT3 Cup Car.  This is a potent factory-built and engineered spec racer that is based on the production GT3.  Cup cars are pretty fast and well balanced and punch way above their weight class.  For instance, a Cup Car in time attack would do pretty good in RWD Unlimited in your typical time attack even though its level of mods is somewhere in-between a limited and a street class car!  So in dreaming, we often wondered what would a Cup Car with a 911 Turbo engine and more aero would be like? Sort of like a poor man’s GT2RS race car? BBi decided to do just that.  They had a 991 cup car sitting around the shop and out came the NA Mezger engine and in went, a BBi built 3.8-liter turbo engine stuffed with CP pistons, Carillo rods and BBi CNC ported heads. The turbo system consists of BBi fabricated inconel headers feeding Garrett GT25-660 ball bearing turbos.  Turbosmart Gen-V wastegates with position sensors were used to control boost.  Boost control is critical in the thin air above Pikes Peak.  The thin air can cause the turbos to overspeed and go into surge.  This kills compressor efficiency and fills the engine with hot air.  It also quickly kills the turbos. The Garrett turbos were fitted with speed sensors and Turbosmart wastegates with position sensors, it was possible to precisely control boost by shaft speed for the best performance over a wide range of atmospheric pressures.  Also, note the ported compressor shroud. A ported shroud is a big advantage under these conditions as it gives more surge margin. The ball bearing center section not only speeds spool and improves response but also can withstand greater thrust loads which is important as the turbo operates near the surge line a lot at high altitudes.