Stoptech calipers have high-temperature silicone rubber dust seals that protect the main seals from dirt and ensure a long service life. Most racing type calipers have no dust seals which creates the need to frequently rebuild them if the car sees a lot of street long-term use. The rubber dust seals used in most OEM brake calipers usually burn up the first time the car is driven hard on the track but silicone is much higher temperature rated than rubber and it takes extreme track use to damage them.

Here is a closer look at the stiffening bridge spanning the open part of the caliper. Here you can also see the two pairs of spring clips under the bridge that put tension on the brake pads in order to help prevent brake squealing noise from vibrations. 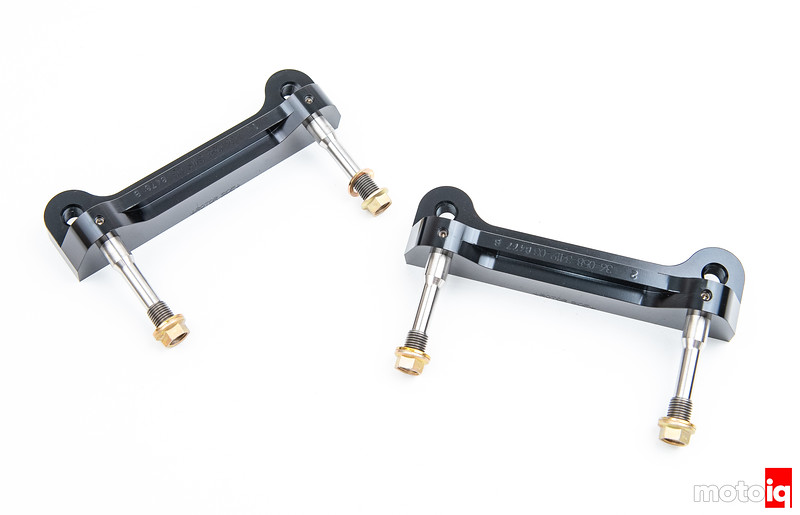 To mount Stoptech’s radial-mount calipers on a car with caliper mounting ears, Stoptech uses these adaptor brackets.  The brackets are machined out of 7075 aluminum and are hard anodized for corrosion resistance.  The calipers are held down with aircraft-grade studs and NAS nuts.

To go with the ST40 front calipers we had to, of course, upgrade the rotors to StopTech’s two-piece AeroRotors. The front AeroRotors are made of an iron alloy formulated for a consistent coefficient of friction over a wide range of temperatures as well as dimensional stability. They are a two-piece design with an alloy hat machined out of super-strong 7075 aluminum that saves a lot of weight. The front brake rotors are 325mm in diameter and 32mm thick vs the stock rotors which are a heavy one-piece design.

The StopTech AeroRotors float on the hat. This means that they have about 0.012″ of free movement between the hat and the rotor. The hat is hard anodized for wear resistance where the rotor floats against it and for corrosion resistance.

The vanes of the rotors themselves have been designed to optimize airflow and pumping efficiency using CFD (computational fluid dynamics) while not sacrificing stiffness or compressibility for a consistent pedal.