We then slid thermocouples under the couplers and into the charge airstream. We placed thermocouples on each of the two inlet sides and one on the outlet side to measure the temperatures going into and out of the intercooler. Here are the couplers with the thermocouples in place and ready for testing. Our test protocol is to run the vehicle on the dyno doing consecutive pulls as quickly as possible until the inlet and outlet temperatures are stabilized and the system is heat saturated.

We also monitor the vehicle’s coolant temps, intake air temps, air-fuel ratio and long/short-term fuel trims using our AEM Electronics CD-5 dash, which also works as a data logger. This is to make sure that we are running the engine within safe parameters and to help with consistency when we do back-to-back comparisons.  This is pretty important in late-model cars whose ECU’s can actively make impactful changes. 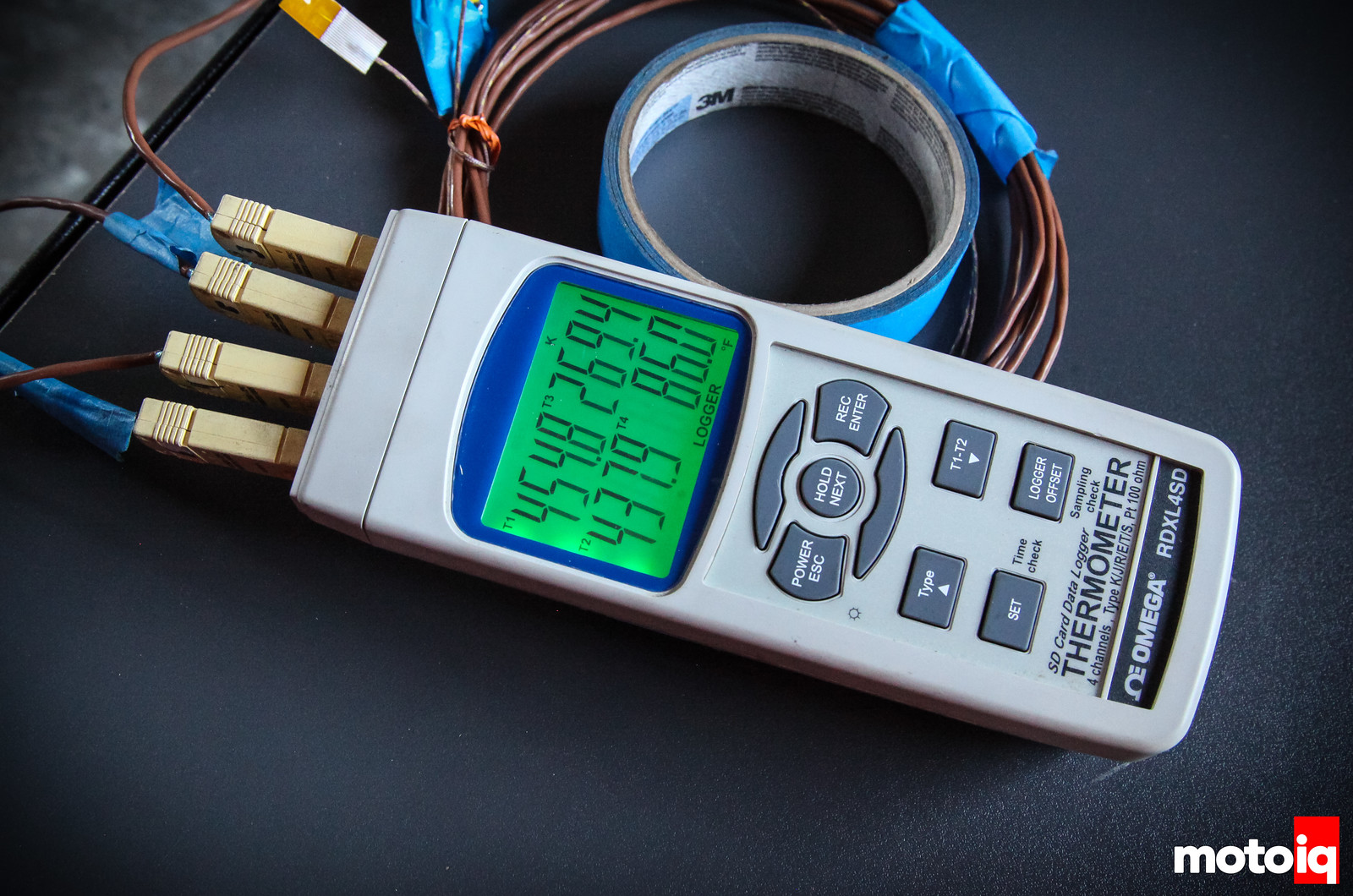 Before we started bolting on the aftermarket Garrett goodies, we wanted to test a couple more things while the car was still in stock form.  Like we mentioned earlier, the factory turbos and intercooler work well for what they were designed for, but we were wondering what exactly happens when one of the many off the shelf tunes available for the Ecoboost engine is used. After loading a new tune to our project it was time to spin the roller again. With the turbo compressors way out of their efficiency range, due to the tune’s higher than stock boost pressure, the charge temps coming out of the turbos were about 450F degrees! After the intercooler, the temps were still a frying 270F degrees! That’s a difference of over two hundred degrees in inlet temp and almost one hundred degrees in outlet temps.  This is seriously not good for your engine!

Additionally, we played around with removing the front license plate which blocks the airflow to the intercooler and re-ran the test.  Removing the license plate made a measurable difference to our air charge temps of about 10-15 degrees.

This was still pretty darn hot and we don’t feel it is safe to run your F-150 EcoBoost on just a tune. Yes, it will make more horsepower, but those inlet and outlet temperatures are unacceptable and will not yield good results in the long run. You can boast on the internet all you want about how your stock EcoBoost F-150 is making all kinds of power on just a tune, but unless you’re on a short lease plan we suggest NOT doing that.

So now that we have our baseline data and verified that the stock components are already being pushed to their limits by the OE tune, it is time to see what kind of results we get from the performance turbos and intercooler from Garrett. SlipAngle Podcast /// Who let the cats out?