Testing the Fluidampr Viscous Harmonic Balancer on the B18C Engine 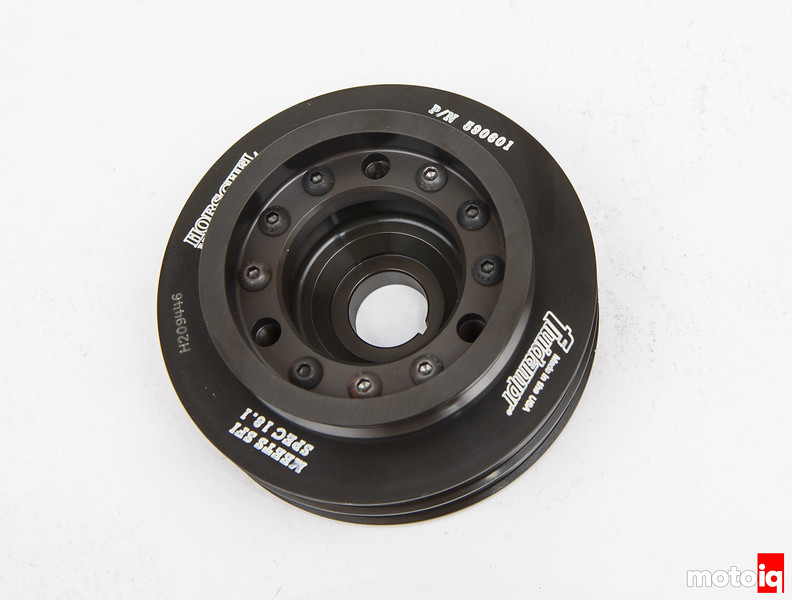 In laying down the base for some serious B series power that we have planned later, we decided to test out Fluidampr’s viscous harmonic balancer on our Project DC2 Integra’s currently bone stock B18C to see what effects it would have. A damper like this is designed to smooth out torsional vibration which is perhaps the most harmful type of vibration to the engine and the most detrimental to power.

Torsional vibration is not related to reciprocating balance as in making sure the pistons, rods, and crank are balanced to each other.  Torsional vibration is the cranks whipping reaction to power impulses applied to it via the force of combustion events.  The impulses applied to the crank add up to larger potentially damaging forces when the crank hits it’s natural or resonate frequency and increased harmonics of it, particularly 3rd and 4th orders as they can fall within the more stressed higher rpm ranges of operation. Engines with long and or flexible crankshafts are especially prone to crank whip,  engines like inline 6 cylinders.

These large vibrations can cause engine damage like crank failure due to high cycle fatigue and bearing wear. As the whip can cause vibrations with an amplitude of over a degree in very extreme cases, it can cause spark scatter as the crank angles sensor gets whipped around. The uncontrolled fluctuations in timing that result from this can cause a loss of power and even engine damage. The whip can cause damage to belt driven accessories like Superchargers and dry sump pumps and even the alternator and power steering. It can also cause belt failure.  So torsional whip can be bad, especially on racing engines and engines that are modified to make very high levels of power, high rpm operation and longer than stock stroke.

Conventional OEM harmonic dampers typically have a hub attached to the crank with a mass damper bonded to the hub with an elastomer. The weight of the mass damper is tuned to help attenuate vibrations in a certain range. A bonded rubber damper can only be tuned to work in a narrow RPM range. Sometimes an OEM will tune the damper to absorb vibrations in a lower order, lower RPM range that is bothersome in a normal cruising RPM range, not at a more destructive high RPM range.  Some OEM dampers have two damping rings tuned to work at different frequencies to help get around this.

The Fluidampr gets around this by being amplitude sensitive instead of frequency sensitive.  A Fluidampr has a steel flywheel housed in a laser welded housing that is attached to the crank.  The housing is filled with a silicone goo that acts as a shear layer between the housing and flywheel. The silicone absorbs the torsional vibrational energy, the more the torsional movement, the more the silicone absorbs the force.  This is independent of the frequency of the vibration. 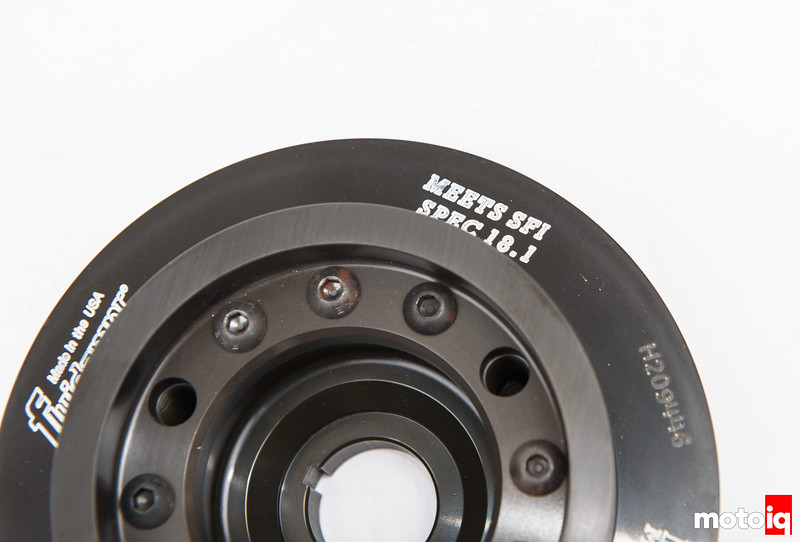 The silicone fluid has a constant viscosity from -40 degrees to 300 degrees with low internal friction.  It also has good heat conductivity so it can dissipate the heat generated from vibrational energy well which makes it a good damping medium.

The Fluidampr also is SFI Certified for safety to their 18.1 spec. This is a specific certification for harmonic balancers and includes requirements that the outer ring cannot separate from the hub in use and that the damper can tolerate being spun at over 12,500 rpm for over an hour with no damage.

The first step in the install was to loosen the power steering pump to get the belt off.