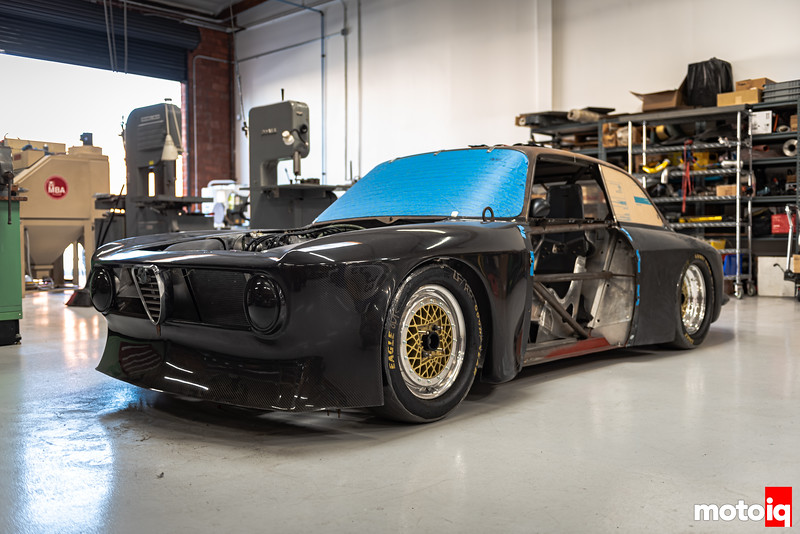 Recently, we got a chance to see a very unique racecar under construction.  Our subject car used to be a 1974 Alfa Romeo GTV 2000 GT Veloce. The GTV was a sedan-based sports car, the 105 series chassis family built from 1971 to 1974 for US export. From the factory, the 2 liter, twin-cam, fuel-injected 4 cylinder gave pretty decent performance when coupled to the lightweight body.  Alfas like this were popular in racing in the day but have since been far surpassed by more modern cars.

Enter Dino Crescentini.  I have known him since I was a kid back during my time at TRD in the ’80s when we used to race against his Alfas in SCCA’s GT3 class with our AE86 Toyota Corollas.  Dino’s dad was the owner of Alfa Ricambi, the biggest parts supplier of Alfa parts and he always raced under the Alfa flag. Later Dino went on to be one of the co-founders of Stoptech and that’s how we still have a relationship with him.

Well now in retirement with plenty of time on his hands, Dino set out to build one of the trickiest most insane racing Alfas ever built and we got to get a good look of it under construction.  This car is just too cool not to share and it is a crazy blend of retro-modern, perhaps the best of any vintage sort of car we have yet to see. Outlaw 356 builders, eat your heart out, you might get the Instagram likes but you don’t have anything on this build, no sir!

There isn’t much Alfa left of the car anymore. It is built to early 80’s SCCA GT silhouette rules. During this time the SCCA allowed the more prepared GT cars to further differentiate themselves from the unibody-based Production class cars by allowing full tube frames. The roof skin and cowl area had to be from the production car but the rest of the chassis could be tube frame. The reasoning behind this was that tube frames are easier to maintain and prepare. This lead to an explosion of expensive and super-trick cars in the class and this was one of those. 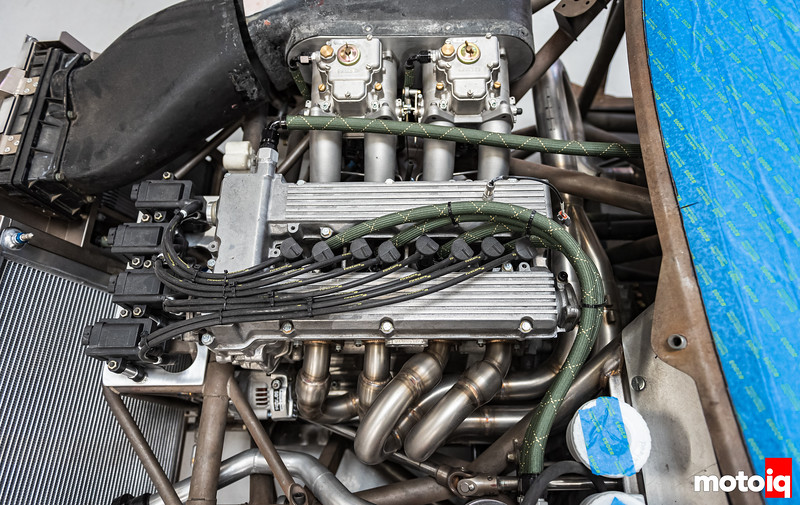 The engine is a 2-liter twin-cam Alfa engine, it has been stroked and resleeved to displace 2100cc. The Alfa engine is pretty unusual, it uses an alloy engine case with free-standing wet cylinder sleeves.  This modular block is topped with a twin-plug 2-valve DOHC hemi head.  The engine features Carillo rods and CP forged pistons with a 14:1 compression ratio. A lightweight billet marine crank is used for lightness and strength.  The crank is 11 lbs lighter than stock. King XP bearings are used for the crank and rods.

The hemispherical two-valve DOHC head features Supertech valves and is extensively ported.  The intake ports are welded and raised for better flow.  The head also contains custom cams with more lift and duration. The shim and bucket valvetrain has been modified for the cams and high RPM usage.

The engine is set back behind the front axle centerline for a great, mid-engine-like weight distribution.  The engine has a large ram airbox with shaped ducts.  The airbox when completed will be made of carbon fiber. What you see here is the plug for the carbon fiber mold. 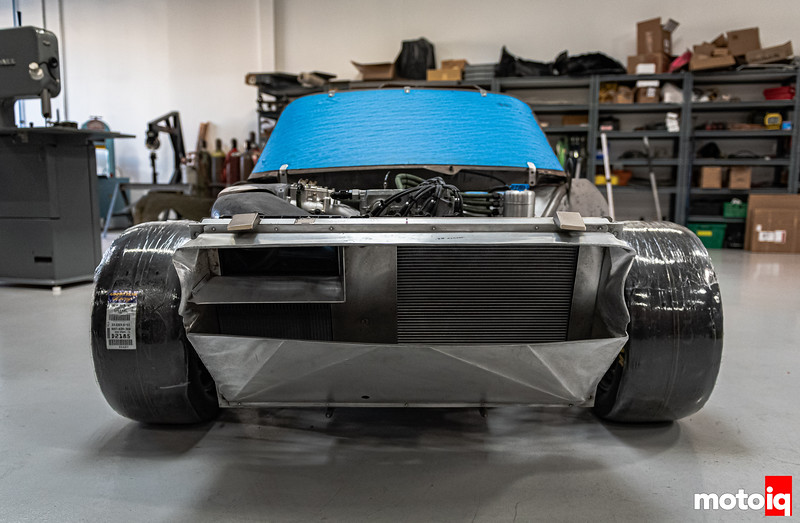 You can see the hand-formed aluminum ducting for the custom PWR radiator and the ram air box.  Although the car has crude 70’s aero or lack of aero, the air through the front of the car is managed pretty well.