As the sun came up it got a little better. It seems like I am at the top of the world!  Pikes Peak is the highest highway in North America.  The sun is up and they are just starting to send cars.  If all goes well they can make 2-3 runs each before the course is closed.

At the start, Dai gets staged up.  The crew is fretting if they will release him while the tires are still warm.  The road is oh so cold, damp and green with no rubber, not conducive for making good traction.

The Evasive/Eneos 86 was a big hit with the media and all cameras were always on the car and team.  I think this is because the fans and press loved this grassroots tuner car against the high dollar factory race car thing. We were going to do our best to give them hell. 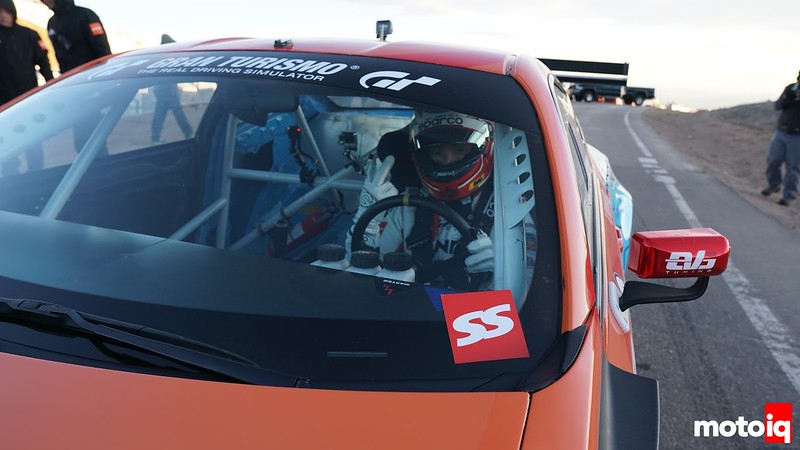 Dai was pretty relaxed.  This was more than what the crew might say.  Pikes Peak is probably the most dangerous event we do.  A mistake could mean flying off a cliff, going into rocks or trees at high speed. There is no run-off and few guard rails. All of us were always worried for Dai’s safety. Not wanting to make him worry, we all held it in which made it worse.

The run to the summit is pretty tricky, the road is damp, cold and green.  The pavement is also very bumpy and full of frost heaves.  The pavement shifts and changes by the hours, big bumps can come and go in hours! Dai struggled with the bumps as we did not know what to expect and there are no places where we can test for this kind of surface.  I struggled to get any temperature readings, the tires actually got a lot colder after the car left the line and I could not even get the pyrometer into the rubber. Toyo’s engineer broke his probe trying to get readings. The tire temps were in the 60-70 degree range! The tire pressures were actually falling over the run as well so we had to add air at the start!  In my whole career, I have never had these sorts of conditions.