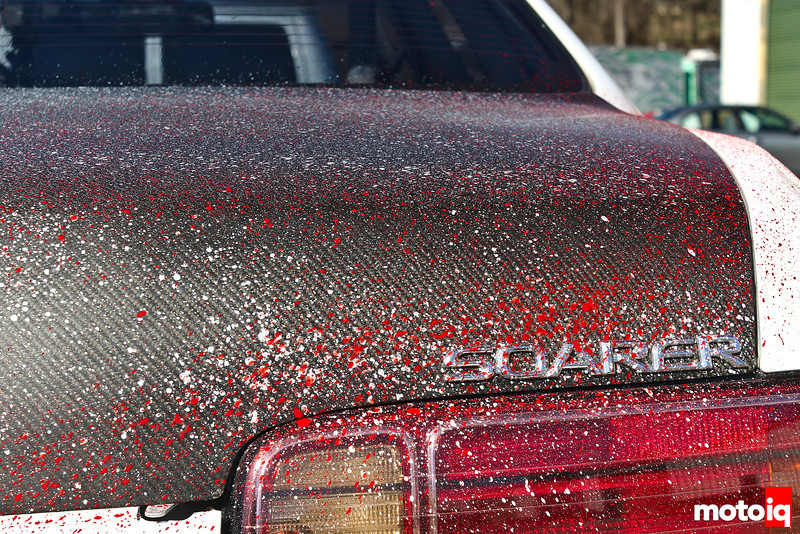 It’s not every day that you get to join a gang. No, really, I mean, they usually have rituals and rites of passage or you have to commit heinous acts of violence or whatever. But, at least for me, it was just as easy as picking up the phone and calling Nine Lives Racing.

The SC300 is not un-aerodanymic. It is a sports coupe from that early 90s era when the Japanese were still designing sleek and sexy shapes. But once you add power and speed, any deficiencies become exacerbated. Granted, the tires were ancient at the time, but I had a very hairy moment locking up the rear wheels coming into turn 10A at Road Atlanta and thought that perhaps some extra downforce in the rear of the car couldn’t hurt.

Johnny has been around racing for quite some time, and I had inadvertently gotten introduced to him when I was trying to put together the personal safety equipment article. We had stayed in touch, since he’s local, and as I saw Johnny putting his little gang together I knew I wanted to be a member.

Robert has been an aerodynamicist, also for quite some time. Johnny and Rob met each other while working for Élan Motorsports on the NP01 prototype, where Robert was actually the project’s chief engineer.

During their time together, Rob and Johnny discovered an extruded aluminum airfoil that was made into a rear wing for the prototype racer. Johnny and Rob were both impressed with its strength, aerodynamic capabilities, and its relatively low cost. When stacked up against the carbon fiber alternatives out there, this American-made unit comes out on top.

While Nine Lives Racing has a bunch of off-the-shelf applications for popular vehicles, they also are able to do custom design services for any vehicle, and so that’s what I worked on with them. It first starts with some dirty photos. Because dirty photos first, and then you can play with the wang.